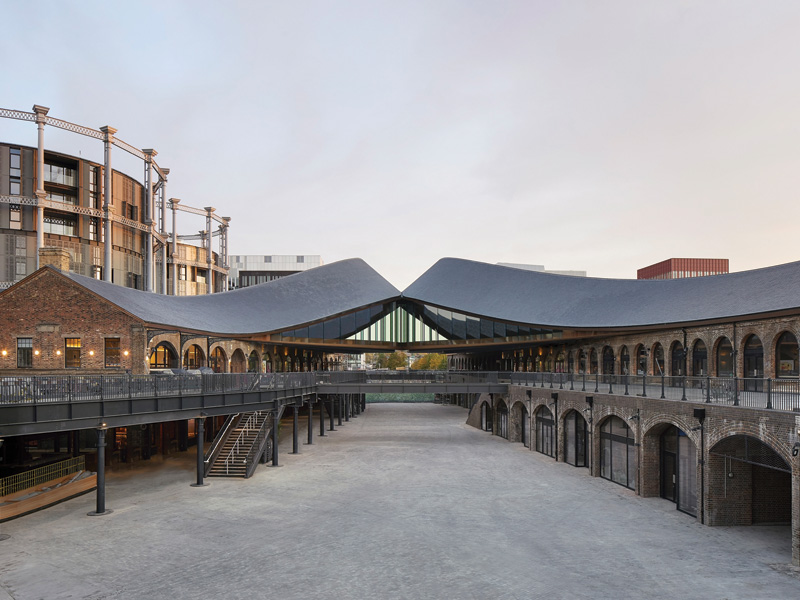 Heatherwick’s Coal Drops Yard repurposes the past to create a characterful shopping destination, plus a look at a development on Great Portland Street

There is something charmless about the average shopping centre. From a design point of view there has been a concerted effort to juje up the concept in the past couple of decades – opening up structures to increase natural light, modernise interiors, and introduce dynamic lighting and other crowd-pleasers – but the design banality is often barely disguised. Neverthless its convenience and clement conditions whatever the weather still ensure a viable footfall despite the frequently formulaic environment.

Meanwhile, the high street withers in the face of high overheads, limited parking (often not aided by council intransigence), relative inconvenience and the universal onslaught of online competition.

If modern mall design is shaped by bottom lines and traditional tropes (giant suspended light rings et al), the converted historic building at least has a characterful headstart. The transformation of St Pancras and the architecturally sympathetic integration of its outlets was so far from the model that has epitomised the average station retail offer that it was a revelation.

Coal Drops Yard is next door, part of Europe’s largest regeneration project at King’s Cross. Once again the sensitivity to the original structure is central to the success of the project, a masterclass from Heatherwick Studio in how to repurpose history for the 21st century. The integrity of the Victorian brick building shines through but is made more elegant by the addition of the roof structure. It rises up from both sides, kissing in the middle. It appears seamless and right, as if the building has evolved its form rather than having modernity grafted upon it.

Not an easy one, however, when dealing with the grittiest of industrial structures. As Thomas Heatherwick has observed, ‘These amazing Victorian structures were never originally built to be inhabited by hundreds of people, but instead formed part of the sealed-off infrastructure of London.’

The biggest single challenge was making the existing buildings suitable for human use and occupation, says project leader Tamsin Green of Heatherwick Studio, which has been based in King’s Cross for 18 years. ‘The buildings were designed as machines for receiving and distributing coal. As such the internal levels were built to accommodate train heights at high level, and horse and cart access at low level. Coupled with this, the central space between the buildings sits at a sunken yard level, invisible from the majority of the surrounding context. How would people know that there was something worth exploring beyond the long masonry facades of the existing buildings?’

It was not only the biggest challenge but also the key to making the buildings work as a retail environment. ‘Circulation and ease of navigation are essential to the making of a successful retail place,’ says Green. ‘This is something we learned from other retail projects that the studio has worked on, such as Pacific Place in Hong Kong.’ The first step was to examine how the internal and external levels could be adjusted to make the shops accessible from the public realm. The building is divided into 6m-wide structural bays, the proportions of which lent themselves well to smaller retail units. ‘We complemented these with larger “anchor” stores at the ends of the buildings that could retain the existing floor levels, navigated through internal vertical circulation,’ says Green.

The team then introduced a series of bridge links, stair and lift connections in the public realm. These were coupled with frequent routes through the existing buildings to stitch together the neighbouring urban areas such as Cubitt Square, the Regent’s Canal Tow Path and Stable Street. ‘These connections make the site very porous and ease the passing from one space or level to another,’ says Green.

While any heritage structure needs to be respected, there is a danger of pussy-footing around it. To function as a modern building it has to be a hybrid of the best of past and present. ‘Our approach has been to be honest about what is existing and what is new,’ says Green. ‘And to treat each phase of the building’s history as of equal importance, rather than being too nostalgic about the early Victorian days. The subsequent warehousing and nightclub days have each left their mark on the buildings, adding to the character and story of the place. The existing context is complemented by new, high-quality materials and details for the new shopfront and public circulation elements.’

And while the historical, industrial aspects of the site imbued the development with character and interest, it wasn’t sufficient to create the necessary pull for a retail destination, says Green. ‘People don’t need to go to physical places to shop any more, you can buy most things from the comfort of your own home. To coax people out to retail places you need to be offering them more than just shops – there needs to be a human experience. The richness in materiality and narrative of the existing Coal Drops site was a great starting point from which to create such a place. But on their own we did not feel that the existing buildings would have created the draw of a retail destination that Argent had envisaged at the heart of its King’s Cross development.’

In terms of both scale, unity and drama, there needed to be a more radical design intervention, she says: ‘We felt that the site needed a more ambitious adaptation of use. One that would create a focus to the site and a public gathering space at the centre that was about more than just shopping.’

‘This is where the genesis for the new roof came from,’ she continues, ‘a peeling of the existing roofscape as a way of working with the existing buildings to pull the site together. The new roof creates a third level to the central public space, enhancing its theatricality and increasing the critical mass of the retail offer.’ Blending ‘art, commerce and culture’, clearly Coal Drops Yard fits into a very metropolitan mould, with a trendy, well-heeled youthful demographic. And by definition, there is a finite number of historic buildings suitable for repurposing as retail centres. But in a highly competitive retail arena such as London it does offer lessons in providing the unique experience that sophisticated consumers crave.

‘In a large city like London we are spoilt for choice, so having the opportunity to rethink the traditional shopping experience was a thrilling challenge,’ says Green. ‘During the design process we looked to other successful retail quarters in London like Covent Garden and the Brunswick Centre. We knew we couldn’t simply emulate these, that Coal Drops Yard had to have its own distinctive character and feel.

‘With retail going through a particularly difficult time at the moment, especially that on the high street, the hope is that Coal Drops Yard will offer a fresh perspective on what retail can afford and offer.’

Coal Drops Yard comprises two heritage rail buildings from the 1850s that now form a new shopping district with close to 60 units, fully opening up the site to the public for the first time. The pair of elongated Victorian coal drops were built to receive coal from northern England for distribution around London by barge and cart.

Over the years the ornate cast-iron and brick structures had become partially derelict, serving light industry, becoming warehousing and nightclubs, before being partially abandoned in the 1990s.

'The challenge was to transform the dilapidated buildings and the long, angular site into a lively retail district where the public could gather and circulate,’ says Heatherwick.

The design extends the inner gabled roofs of the warehouses to link the two viaducts and define the yard, as well as making circulation more fluid. The flowing roofs, supported by an entirely new and highly technical freestanding structure interlaced within the heritage fabric, rise up and stretch towards each other until they touch. This introduces a completely new floating upper storey, a large covered outdoor space and a central focus for the entire site.

The scheme creates 9,300 sq m of new retail area, as well as significant public space. The units vary in size (ranging from 15 sq m through to more than 1,900 sq m), accommodating a wide range of established – Cos, Fred Perry, Paul Smith, Tom Dixon – and emerging brands, alongside new restaurants, bars and cafes.

At the less gritty end of the historic-building spectrum, London’s Great Portland Street in Fitzrovia was built in the 1700s as part of the Duke of Portland’s Estate. A typically eclectic mix of buildings, it mingles Victorian, Georgian and modern architecture.

In a recent mixed-use development by Lifschutz Davidson Sandilands, the ad hoc collection of seven buildings at 78-92 Great Portland Street were transformed into new retail outlets, together with modern residences and office space. ‘It provides an interesting example in the light of the Great British High Street campaign and ongoing reports of how high streets need to evolve to compete with online retail,’ says LDS, which has been involved with Foyles, Bonhams, Harvey Nichols, Sainsbury’s and Liberty among many other retail schemes.

In order to reinvigorate the stretch and to increase the appeal of the historical facades the exercise even involved incorporating an entire frontage moved from the neighbouring district of Soho. Ironically the original brief didn’t seek to exploit the character of the buildings. ‘Interestingly our initial brief was to deliver new white box space to appeal to the broadest range of retailers,’ says LDS associate director James Parkin. ‘However, as the project developed and the brief evolved to reflect the client’s eagerness to promote small independents in this area, we realised that celebrating the heritage of the existing buildings and the history of past uses was a huge asset.’

In London’s shouty, highly competitive retail environment, it was an advantage to create a strong personality for the development, says Parkin. ‘Utilising the existing, quirky prominence of the store on the street. A characterless 1980s shopfront was replaced with a heritage frontage from Soho. The highly modelled, period timber and masonry shopfront required careful dismantling, restoration and refurbishment before reassembling in its new location. The move not only increased its character but also flooded the space with natural light.

'The use of a heritage structure can lend a sense of establishment to a new independent retailer,’ says Parkin. The 'as found’ condition creates a unique canvas. In this instance, buildings that were once car parks or office receptions, car showrooms and so on are now shops. and unique nature of the historic fabric enhances the physical retail experience and acts as an aid in brand building – providing an identity which can then be translated online.

‘It works as a counterpoint to Oxford Street’s international big box retail [...] the ripple effect moving through Soho and Fitzrovia allows independents to flourish in interesting found spaces[...] they benefit from the increased footfall via the improving east end of Oxford Street.’

Among the architectural interventions, existing pavement lights were reintroduced and new ones opened up to bring natural light into basement areas. These are artificially lit at night to increase the ‘As a practice we are committed to a long-life, loose fit approach, and this capability of the existing to redefine itself to a contemporary context, while not by any stretch a revolutionary concept, is nonetheless very important to our streetscape, not to mention carbon consumption.’

Such design strategies are vital to the continuation of the high street, says Parkin. ‘The survival of bricks and mortar retail relies on the physical experience. Design is fundamental to this. While physical sales might not meet online sales, the brands need a literal ‘shopfront’. A carefully curated high street, with interesting offers, goes a long way to achieving this.’