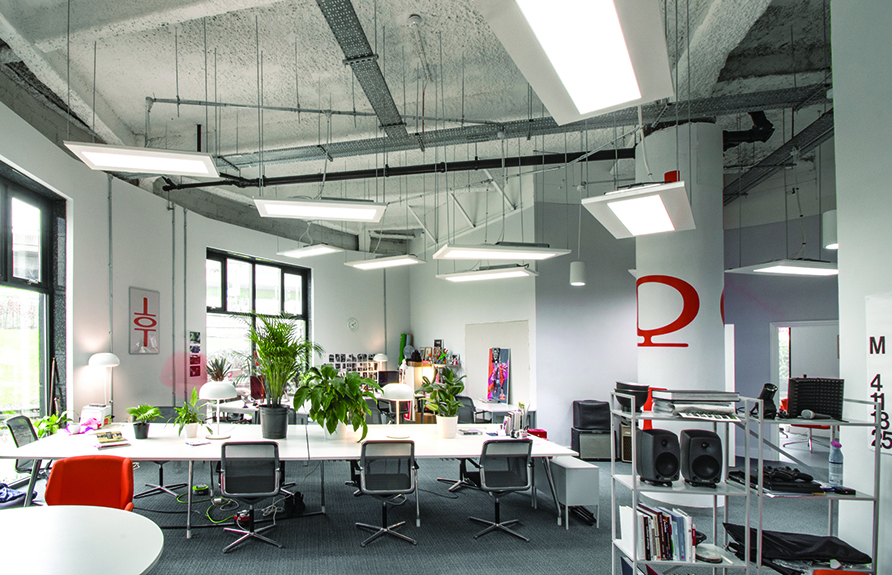 The Rotunda by Fathom Architects is a unique project – a bizarre cylindrical annex, previously the BBC's nightclub – now provides studio space and a music venue

The Rotunda by Fathom Architects is a unique project. Adjoined to White City Place’s Westworks the structure itself is a bizarre cylindrical annex of just 325 sq m, previously used – bizarrely again – as a private nightclub for the BBC. Whatever happened there was long forgotten by the time Fathom was appointed, the space having most recently served as a site office for the larger development nearby: that of White City’s reimaging as a new creative quarter, where its tenants include the Royal College of Art, Net-a-Porter and coworking company Huckletree. What the client Headquarters International (HQi) imagined for the Rotunda, purchased in 2017, is also a coworking space with a creative bent, but its demographic and ethos is different. Whereas many artists, designers and musicians are excluded from coworking spaces by virtue of high rents, HQi’s project is a social enterprise – its offers an ‘incubator space’ of free studio and production facilities to a curated selection of rising artists and musicians.

The client was not just HQi however, but also developer and project-funder Stanhope, which owns White City Place. This arrangement worked more cohesively than might be expected: the project came together under the ambitions and resourcefulness of a group of creatives, backed by a developer keen to realise their vision. Even with money coming from Stanhope, the budget for this not-for-profit initiative was ‘minimal’, says Harry Godfrey, project lead from Fathom. Although this meant frequent budget appraisals and reappraisals – a ‘you can’t have that, you can’t have that’ process, as HQi founder Muz Azar describes it – Azar says they couldn’t complain as it felt like everyone wanted the project to succeed. The Rotunda is a cylindrical space

The idea was that Fathom’s work would leave ‘room to grow’, enabling HQi to continue to personalise and develop the space in line within its own budget and future plans. This approach has been termed by Fathom’s founder Justin Nicholls as ‘anti-architecture’. Godfrey explains further: ‘Working within your parameters, you can’t design and build all these nice bits of joinery, but you can take it back to a shell to grow over time.’ HQi has moved quickly already however, building two studios in what were initially going to be an office and a storage space, spurred on by the determination and insight of acoustic engineer Flavio Carvahlo of Urban Studio Design.

While previous occupants hadn’t used the space efficiently – the toilet area taking up a third of the downstairs floor – the current arrangement meets HQi’s needs without compromising facilities. Following a circular economy model, the architects repurposed material such as floor tiles, lighting and airconditioning units, and made use of free-issue items from Stanhope’s MediaWorks project (adjacent to the WestWorks), including a kitchen with integrated amenities and a Corian work surface. My visit coincided with April’s Extinction Rebellion protests, and it was clear sustainability was high on the agenda here too. Both architect and client seemed relieved to be reusing, rather than building new and creating more waste. Stanhope senior project director Mike Horton praised how the work was done in a ‘very economic and sustainable manner’. Although Azar has ambitions for the Rotunda to one day be more ‘high-end’, the current economical design has fulfilled the brief at minimal cost – Godfrey says they ‘[spent] most of the budget on M&E to make it as nice as possible’. The downstairs space is calm and airy, its minimal colour palette ‘neutral’ as wished for by both HQi and Stanhope. HQi saw its demographic as needing something very different to the Huckletree crowd, for instance, describing these spaces as too ‘garish’ for its artists and designers, though Azar admits here that his own attempts to personalise the Rotunda have also been rejected by the resident artists.

While the downstairs was always conceived of as a coworking space, the upstairs was originally to be three studios for the somewhat mysterious Paul Institute (Jai Paul, AK Paul and HQi founder Muz Azar), which eventually decided to base its own studios elsewhere. And so after spending the majority of the budget downstairs with only its ‘last £10k’ for upstairs, HQi decided to turn it into a music venue instead.

For this, architects and client decided the best thing they could do with the money was to make the most of the building’s unique form and strip everything back. When they removed a floor they by chance found a brilliantly atmospheric space reminiscent of Herzog & de Meuron’s Tate Modern Tanks, itself built for performances. The Rotunda’s double-height room, exposed raw block and steel structuring, and a dramatic conical roof light in the centre, looked the part, but the real ‘fluke’ was the perfect acoustics from the dimensions and circular geometry of the room. Azar claims the sound quality is as good there as the studios of Abbey Road. Always looking forward, he spoke of turning it into a large recording studio in the future, a ‘ proper iconic studio – big live room, string orchestra’. This is the second Fathom project in White City Place, following the success of mobile podcasting studio The Pod (see FX’s February 2019 issue). As for the Rotunda, both Stanhope and HQi seem thrilled. As well as providing precious studio space, upstairs is a welcome addition to London’s music venues – another endangered species of the built environment.