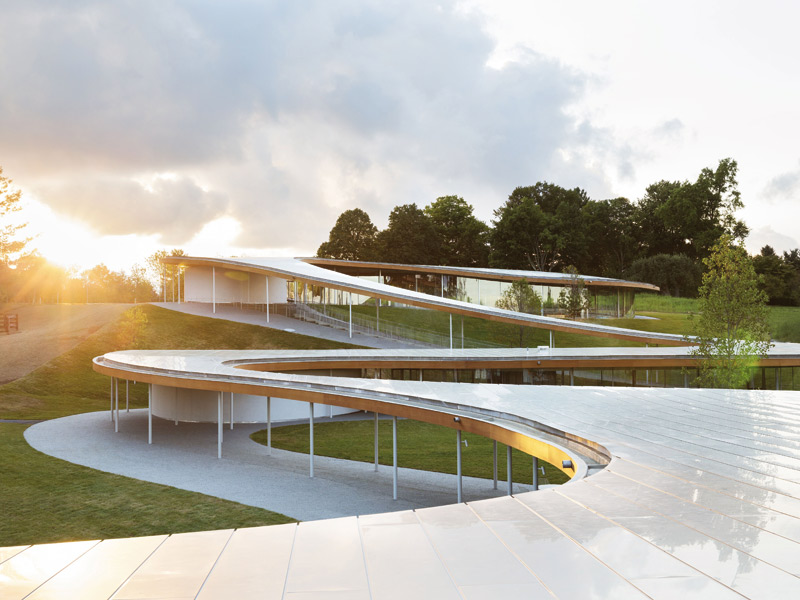 SANAA has added yet another curved-glass building to its portfolio in the form of Grace Farms, a minority evangelical Christian church and ‘sanctuary’ in rural Connecticut

'Would you like a parmigiana lollipop?' asks a waiter carrying a tray of improbably light hors d'oeuvres -- cheesy, filigree crisps resting on thin, white posts. They are the perfect accompaniment for a visit to the River, an improbably light building, its vast curved roof resting on thin, white posts. At its opening this autumn - a three-day extravaganza of concerts, dance performances, and the unveiling of works by artists Olafur Eliasson, Thomas Demand and Teresita Fernandez - experts discussed the horrors of human trafficking, while waiters circulated with champagne and canapes. Contradictions abound at this 80-acre property devoted to evangelical Christianity crossed with new-age sensibility - Jesus, yoga and Rainforest Alliance coffee. The building is owned by the non-profit Grace Farms Foundation, supported in part by Robert Prince, a hedge fund manager who took home $425m in 2012. Prince seems unfazed by the cost of the building (estimated at $83m), which provides space to a church he and his wife, Sharon, helped establish in 2001. Known as the River, the building is a collection of glass-walled pavilions, arrayed beneath a canopy that flows languorously down a hillside in Connecticut's New Canaan (the wealthy suburb in which Philip Johnson built his Glass House 65 years ago). One of the rooms is an auditorium that doubles as a sanctuary for the Princes' Grace Community Church; the others are a library, dining room, gymnasium and 'welcome center'. Despite its name, the building looks less like a river than a snake - specifically, a boa constrictor that has swallowed five rooms, ranging in width from 9m to 50m. Despite their variation in size, the five rooms have a shared aesthetic - they are all entirely glass-walled and relatively column-free. Outside, the delicate white posts (just 13cm across) support wooden beams that, in turn, carry an anodised aluminium roof. The roof panels were made by the same Midwestern company that supplies facades for Frank Gehry and Zaha Hadid. Like everything else at Grace Farms, the roof had to be perfect, since the site, with a 15m drop from one end of the River to the other, means visitors will see much of the building from above. Bathrooms and lifts are contained in opaque cylinders, similar to the bathroom at Johnson's Glass House, but entirely in white. The aim of the design was to 'retain the open-space character of the property'. Image Credit: Iwan Baan

On Sundays Cliffe Knechtle, the senior pastor of Grace Community Church, presides over the largest of the glass-walled rooms. According to the church's website, Knechtle believes 'in the bodily resurrection of the dead', specifically, that 'those who have put their faith in Christ will enjoy eternal life in heaven'. The rest of us may have to settle for a visit to Grace Farms, perhaps the closest thing to heaven in this lifetime. The building drops 15m from one end to the other across the site. Image Credit: Iwan Baan

The River is the latest gossamer building from SANAA, the Pritzker Prize-winning, Tokyo-based firm headed by the ethereal Kazuyo Sejima and her partner Ryue Nishizawa. It is known in the USA for two projects. The New Museum, which opened in 2007, is a stack of opaque grey boxes in Manhattan's Bowery, a somewhat sombre building that has nonetheless caused the Lower East Side arts scene to explode, while SANAA's Glass Pavilion at the Toledo Museum of Art is a gallery for glass art that is itself a work of glass art. The Toledo building, completed in 2006, is the polar opposite of the New Museum: not opaque but transparent, not boxy but round, not vertical but horizontal. Though little-visited by architecture buffs (Toledo isn't on anyone's circuit) it is a miracle of minimalism and a remarkable disappearing act, an exhilarating realisation of ideas propounded by Mies van der Rohe with his pre-war renderings of (then unbuildable) crystalline towers and, later, partially realised in his post-war Farnsworth House and other habitable vitrines. But Mies and his disciples, including Johnson (and his peers, such as Oscar Niemeyer, operating in South America), didn't have the technology to curve large sheets of glass. SANAA does, and what it created in Toledo resembled a series of cylindrical glass vases, enlarged to building size and slid between thin floor and ceiling slabs. SANAA has played with the same idea in other buildings, including its 21st Century Museum of Contemporary Art in Kanazawa, Japan and its Rolex Learning Center in Lausanne, Switzerland, both of which use curved glass sheets as walls. This is SANAA's third building in the US and features the familiar motif of curved glass walls. Image Credit: Iwan Baan

'After Lausanne we thought our buildings don't do enough to communicate with nature,' Sejima said recently. Grace Farms was meant to further that communication. Doing so required 203 of the largest curved IGUs (insulated glass units) ever created - as much as 2.5m wide and 4m high, with angled tops to fit the building's roof. The panels are also symbols of how far the Princes were willing to go to achieve their goals: The glass was made by British company Guardian Industries, curved in Spain and fitted into frames in Germany before making its way to the New World, where engineers focused on making the seams between panels almost invisible. Andy Klemmer, who served as the liaison between the architect, the client and myriad contractors and consultants (a role he also filled in Toledo), said that where two panes meet, there would normally be a 76mm vertical black stripe. By giving the problem 'all our energy and attention', he said, 'we were able to reduce that to 44mm and hide most of it behind "frits" on the glass.' The roof has been left pristine as most overall views of the building are from above. Image Credit: Iwan Baan

The Princes are 21st-century Medicis. And, like their Renaissance counterparts, they bankroll projects that combine aesthetic and spiritual aspirations. But the Medicis stood for a majority religion, while the Princes represent a small minority of evangelical Christians, surrounded in this part of Connecticut largely by secular Christians and Jews. So, while the Medicis were big on religious iconography, this church in rural New Canaan provides a neutral backdrop. 'That's a baptismal font,' says Sharon Prince during a tour of the building several months before it opened. But then she adds, 'Or you can use it as a water feature if you're putting on a play.' The room with the font, the building's largest space - will display a cross only on Sundays, when Pastor Knechtle is at the lectern. Five 'rooms' sit under the curving canopy roof of the River, including this gymnasium. Image Credit: Iwan Baan

The building, like so many seemingly effervescent works of architecture, was forged in earthly compromise. Most of the site - a patchwork of small farms and orchards - was acquired by Grace Property Holdings in 2007. Some neighbours objected to early pre-SANAA plans for a 1,200-seat sanctuary, which, they believed, would have brought too many cars to their sparsely populated neighborhood. Political pressure and lawsuits followed. Over time, the Grace Farms Foundation, headed by Sharon Prince, reduced the number of seats in the sanctuary to 700 while touting the building's public amenities. Scattered around the property are 'community tables', designed by SANAA and made from trees cut down to make way for the building. The barn (a separate complex of existing buildings, sleekly renovated by SANAA) includes rooms for organisations like Arts for Healing, Hope for Haiti, and the local Domestic Violence Crisis Center. The size of the auditorium - it now has 700 seats - had to be reduced from the initial plan. Image Credit: Iwan Baan

Miroslav Volf, a Yale professor of theology and a director of the Grace Farms Foundation, says the beauty of the building and its surroundings will help visitors 'open [themselves] for the encounter with God'. God may indeed be in these details. But even SANAA can't overcome the laws of physics. The building, while often described as 'invisible', doesn't come close to disappearing. Glass, however transparent in architectural renderings, is reflective in real life (even the low-iron version used at Grace Farms). In the foreground is a photograph of SANAA models by Thomas Demand. Image Credit: Iwan Baan

And the fascia under the roofs, though certainly as thin as SANAA and the building's engineers could make it, is bulky enough to be obtrusive. Indeed, far from being a ghostly presence, at times the River can seem divisive, like a bright-white version of Richard Serra's Tilted Arc. That curved metal sculpture was removed from a public plaza in Lower Manhattan in the Eighties, after workers complained that it impeded movement. The River at night. Night-time lighting was an early bone of contention with neighbours. Image Credit: Iwan Baan

True, the River is stylistically nothing like Serra's heavy metal artworks. But, while appearing to tread lightly on its site, it requires large windowless basements to accommodate back-of-house (in this case, bottom-of-house) functions, as well as the mechanicals that couldn't be allowed to clutter the building's pristine roof. The landscape architects at Olin, a respected Philadelphia firm, did a good job of putting the property back in order, but only after much of it had been torn up for construction. The Grace Farms Foundation describes its 2007 purchase of the land as 'a gift of charity...to retain the open space character of the property'.

But no matter how ethereal, a 7,700 sq m building isn't open space. And a building with a substantial carbon footprint (think of that peripatetic glass) challenges environmentalists, such as me, who love inventive architecture. The River is stunning; let's hope its programming - which, so far, is drawn largely from existing institutions - justifies its financial and environmental costs.