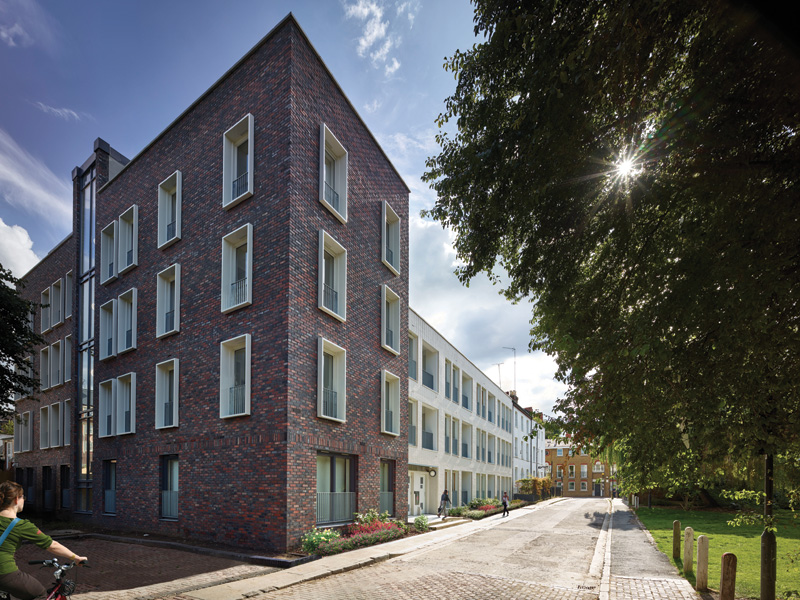 For a housing development providing flats for rent for key workers in London, the search was on to find a suitable site for mass housing. Farrells has shown on the Hammersmith site that affordable housing can be light, open, generous and nuanced

At the end of a small, leafy side street in Hammersmith, a new housing development for working Londoners, designed by Farrells, shows the possibilities for affordable housing to be light, nuanced, open and generous. With its bright, white, front facade of stack bond brick, floor-to-ceiling windows and deep, recessed balconies, the building is almost more window than wall. It has a clean, modernist expression that wouldn’t look out of place in a sunnier, southern European city.

Comprised of 29 one- and two-bedroom apartments for rent, 50 per cent affordable, the scheme was designed for Dolphin Living, a charitable foundation that provides accommodation in central London for key workers who otherwise wouldn’t be able to afford to live in the capital. Once the project is completed homes are held in perpetuity to prevent units falling into private hands in the future. Farrells started discussing the possibility of a potential project with Dolphin Living in 2010, carrying out various massing studies for different sites in the area until this particular one was settled on. Fast forward to 2017 and the project was delivered ahead of schedule and on budget, allowing residents to move in in August. The white, stack-bonded brick-block echoes the uniform lines of the Georgian terrace next door

The L-shaped building faces Marcus Garvey Park on one side and a children’s playground on the other, with a private, south-facing courtyard in the middle, and is bordered by a series of low-rise residential blocks to the back. The site was previously home to a disused recording studio and parking space. While the white brick block continues the lines and proportions of a similarly white Georgian terrace next door, a taller, dark-brick block bookends the street at its finish.

‘Contextually there’s an enormous variety of architecture,’ says Rob Lewis, associate partner at Farrells. ‘There’s terraces, modern-builds and different types of council estates. To say that we’ve looked around and taken inspiration from the area is almost a bit of a cliché, but we have in parts. The brown brick puts a marker down, so it blends with the variety around the site. It draws your eye to the end of the street.’ Homes feature floor-to-ceiling windows, connecting the rooms to the park opposite the building

Windows on the darker block are defined by white, aluminium frames, tying it together with the white block. The brown brick is Wienerberger Hectic Special, which has a rich variety of texture and colour — some sections are charcoal grey, some russet red and some look like they’ve almost got specks of gold in them. ‘When we were specifying it, it was the first time the brick would be used in the UK,’ says Lewis. ‘It’s not the cheapest brick but for us that was important. It’s not a huge-budget building; we had to pick out the things that we felt held the design together.’

Working the budget hard and keeping standards high allowed the practice to save on other elements — the balcony balustrades, for instance, are made of cheap galvanised metal, and inside in the communal corridors, the services and pipework are concealed by galvanised mesh ceiling panels.

‘It took a bit of convincing because galvanised is quite a raw material. It flows all around the building and that’s a great win for us, to have a bit of fun with the design. If you can fight for a few details, it just lifts the building up,’ explains Lewis.

Inside, the communal corridors are designed as outdoor spaces, with simple composite fibre walls and grey paving slabs left unfinished without mortar. Fire-rated doors with glass panels give glimpses of the stairwell in the taller block, encouraging people to pass by each other and use the stairs instead of the lift, while huge windows on to the playground flood the stairwell with light and connect to the greenery outside. The only splash of colour is a pop of yellow painted under the soffits of the raw concrete stairs.

The outdoor corridors open on to the inner courtyard and reference the mansion-style council blocks opposite but in a much lighter, more contemporary way. Some levels look on to the green roof of a studio flat. Early on in the design process, Farrells designed a plant room that was no longer required by the time the project went to site, so it was converted into an apartment with a south-facing terrace and opaque, angled window bays that project on to the courtyard to prevent overlooking. For a small space, it turned out to be the most sought-after home of the scheme. The rest of the flats — half one-bedroom, half two-bedroom — could almost be classed as dual aspect. The majority of the units have living rooms and bedrooms looking on to the open spaces of the north-facing park or playground, with kitchens facing the courtyard and communal corridors, given privacy with opaque windows. Slightly larger apartments, set back on the top floor, feature sliding doors and long, narrow terraces, while others on lower floors have neat, inset balconies tucked off the living area. All feature open-plan kitchen and living spaces.

Inside the flats are kept simple, with plain white walls and laminate timber floors, letting the vistas outside tell the story. Says Lewis: ‘From the outside, the windows look scaled and in proportion, but inside the whole space is a window. They tilt and can be opened right up to doors, making the living room feel almost like an outdoor space.’