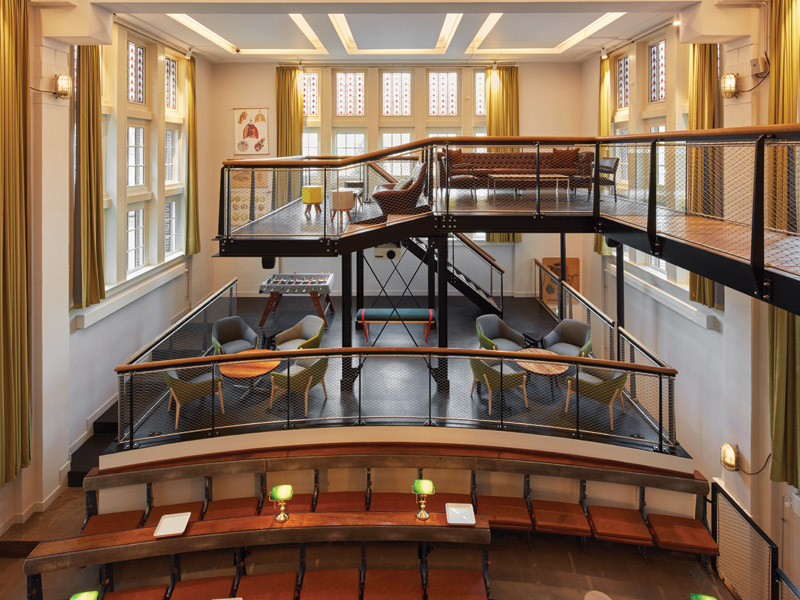 Art and Science collide – in a good way – where a 100-year-old, former health sciences building and zoological museum has been converted into a 168-room hostel/hotel hybrid, the latest to bear the Generator badge. DesignAgency and local architect IDEA Ontwerp collaborated to restore the building that is now Generator Amsterdam – an idiosyncratic hostelry for ‘backpackers, flashbackers, families, young professionals and business travellers’ filled with quirky, bespoke art, graphics interventions and playful lighting. They include totems in ceramic and wood by Dutch artist Hans van Bentem and the lift shafts wittily graffitied by muralist and graphic artist Pieter Ceizer, whose graphic conversation starters make light of the experience of ascending and descending. Other interventions by Kamp Horst, Graphic Surgery (Gysbert Zijlstra and Erris Huigenns) and Gino Bud Hoiting, give individual spaces in the hotel a strong visual identity.

Although the art is contemporary it frequently references Dutch folklore and culture and many of the building’s original, heritage-designated spaces have been preserved, albeit with a twist. For instance, the reception’s neon sign – three crossing keys – is both a jocular reference to Amsterdam’s coat of arms and to its red light district. The design team restored original features such as the intricate interior brickwork, stained glass windows and the historical auditorium’s original curtains. Animal, plant, robot and science motifs suggest the history of the building, but in a charming and, at times, absurd way. ‘Generator Amsterdam grew from a process of getting to know the city, meeting people and discovering its existing hotel scene and lifestyle brands,’ says DesignAgency principal, Anwar Mekhayech. ‘We also explored the opportunities and limitations of the amazing historic building. More so than ever, collaborations with artists and locals were essential in helping us bring our aspirations to life. We hope that the joy and authenticity of this creative process will touch guests and locals, inspiring them to make their own Amsterdam discoveries.’ The historically protected auditorium has a bar with preserved raked seating adorned with reading lamps and drinks trays. Typographic designer and illustrator Geronimooo! appropriated the existing chalkboard for an illustrated drinks menu and surrounded it with drawings that play on the space’s history as a laboratory, including illustrations of a giant fish and a dragonfly, scientific equipment and mathematical formulas. In place of the lectern, a generous bar is presided over by the beer taps and a gleaming espresso machine.

The old library is now an event space and hideaway. Its dark wood shelving and railings are punctuated with objectified, orange books and accessories and orange linoleum flooring. The stacks form private ante-rooms, adjacent to the open area for meetings, private parties or ping pong. The hotel has three casual lounges intended to prompt interaction between guests, one on a stage, another suspended from a galvanised steel frame and a third on a mezzanine overlooking the bar. The frame snakes through the space, creating a stair and catwalk. The furniture includes a Florence Sofa by Orior By Design, Nido Lounge Chair by Basic Collection, an RS#3 Foosball Table by RS Barcelona, Sconces and Chandelier by Blom & Blom, and miscellaneous vintage pieces from Neef Louis. The interior decoration is quirky and idiosyncratic

The chandelier over the bar is made from laboratory flasks found during the renovation by Amsterdam-based siblings (Kamiel) Blom & (Martijn) Blom, who have collected, restored and redesigned hundreds of industrial lighting fixtures from Soviet-era factories in Eastern Europe. In the lower-level canteen, exposed brick walls reveal the structure while birch frames around the periphery signify Amsterdam’s canal row houses and provide intimacy, while also nodding to the locale’s architectural history. The herringbone floor tiles by 41zero42, rendered in vibrant colours, reference aerial views of tulip fields. A mix of seating includes chairs by Piet Hein Eek, Andy Thornton, Tom Dixon and Souvignet Design, further adding to the atmosphere of eclecticism. Guest rooms are intended to be basic but comfortable; yet also encourage guests to use the shared social spaces. In the park-side building’s all-glass rooftop addition, they feature floor-to-ceiling windows.

Each room is accented with its own Studio Job wallpaper; premium private rooms feature blanket designs by local textile designer Mae Engelgeer.  Typical furnishings include W Chairs by Billiani and Offcut Stools by Tom Dixon, as well as Anglepoise lighting and tiled bathrooms. The hotel’s design not only pays homage to the building itself but also meshes with the locale. Ooste and its famous park is regarded as the artistic centre of the city and the hotel has also partnered with neighbouring businesses, including a coffee shop and a bicycle hire firm, to provide services to guests.