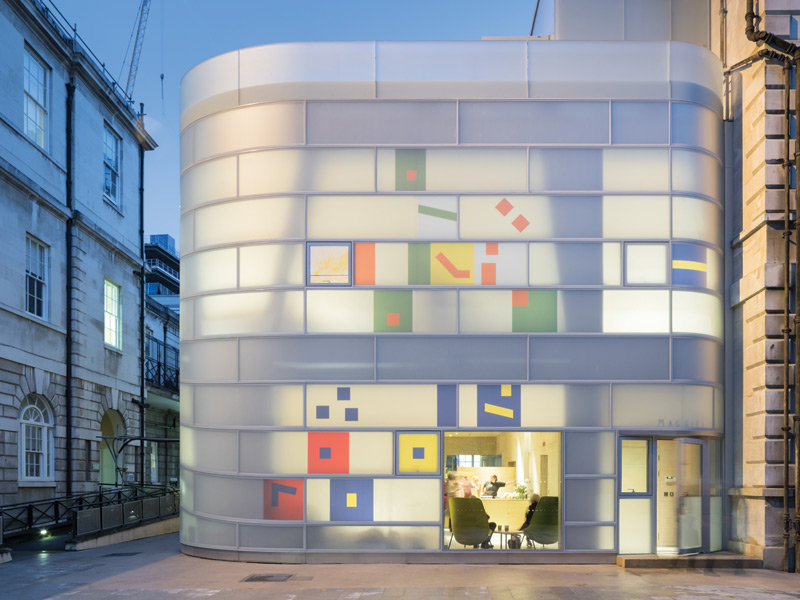 Healthcare environments that promote calm and well-being for patients and staff are just what the doctor ordered...

Hospital and clinic design is undergoing immense change as commissioning bodies begin to recognise the inherent value of good design, believes architect Catherine Zeliotis, healthcare leader at international design company Stantec. Despite the pressures on budgets that can promote utilitarian solutions, there is now a recognition that good buildings make sense for environmental, staff retention and patient wellbeing reasons.

‘When you look at the big picture, the original cost of the building is a tiny amount compared with the running costs and staff salaries; in the end a cheap building costs a lot more to run,’ she says. ‘Providing access to natural lighting and nature definitely pays for itself as you are saving energy, and as a building is likely to be in use for 60 or more years it’s important to provide something that’s a legacy to the community and will improve the mental wellbeing of those who spend time there.’ Maggie’s centre at Barts, designed by Steven Holl Architects, has an inner layer of bamboo and an outer layer of matt-white glass with coloured-glass fragments inspired by ‘neume notation’ of medieval music, reflecting the heritage of the 12th-century hospital. Image Credit: Iwan Baan

Shahin Heidari is the founder and principal of New Wave Architecture based in Tehran that recently completed the 160-bed Pars Hospital in Rasht. ‘The architectural design of hospital buildings has faced great changes,’ he says. ‘For years, health centres in Iran have been based on pre-designed blocks that create a network of mostly very narrow and dark corridors, which arouse a sense of fear and stress in users. Now, we are redefining and re-evaluating the design of these buildings to offer the kind of facilities that promote calmness during the patient experience.’ Maggie’s in Oldham, designed by dRMM, has a mature tree at its heart, and uses timber throughout. It is the first cross-laminated hardwood building in the world, with an exterior of corrugated, heat-treated American tulipwood. Image Credit: Alex De Rijke

Around the world, architects involved in healthcare seem to be concentrating on much the same principles – daylight and access to nature, intuitive navigation, human scaling and creating a sense of privacy and personal control in a situation that has the potential to be dehumanising. ‘Architecture has the ability and responsibility to improve people’s lives and nowhere is this more important than in a building dedicated to making people well,’ affirms Ivan Harbour of Rogers Stirk Harbour + Partners, co-architects with Stantec on the recently opened Cancer Centre at Guy’s Hospital.

The first two principles – daylight and views of nature – are now almost universally recognised as priorities in healthcare, although it has taken more than 30 years for the biophilic concepts first investigated by Roger Ulrich, professor of architecture at the Centre for Healthcare Building Research in Sweden, to become mainstream. Ulrich proved that patients recovered from surgery faster, experienced reduced stress and were discharged from hospital sooner if they could see the natural landscape from their window.

Incorporating views and natural planting into hospital environments is now commonplace – Tokyo-based Kengo Kuma and Associates, for example, has just completed the Seijo Kinoshita obstetrics and gynaecology hospital in Tokyo in which the waiting areas and bedrooms merge almost seamlessly into the landscaped courtyard garden. The 2,406 sq m Seijo Kinoshita hospital in Tokyo, specialising in obstetrics and gynaecology, is known as the Green Hospital for the way its waiting and treatment areas seem to merge into the planted exterior. The facility was designed by practice Kengo Kuma and Associates to have a domestic ambience with warm, natural finishes throughout, including stunning external floating timber louvres. Image Credit: Toru Hiraiwa

‘We designed a green, wooded refuge… eschewing the cold institutional character more typical of hospitals,’ says the practice about what has become known locally as the Green Hospital. At The Manser Practice’s holistic NGS Macmillan cancer unit at Chesterfield Royal Hospital, patients receiving chemotherapy can gaze out over the Derbyshire countryside, while the whole, uncluttered design is intended to reduce stress.

One of the most stunning aspects of the new Maggie’s centre in Oldham, designed by dRMM, is the way it incorporates nature. Supported on slender columns, the building floats above a garden of pine, birch and poplar trees, while at the centre a tree actually grows right through the building. Alex de Rijke, founding director at dRMM, explains the concept this way: ‘Nature and daylight and the view of the ground below and sky above (the strong presence of outside) has been brought into the interior in an unexpectedly powerful way; a large asymmetrical hole through which a tree grows marks the centre with an absence. The building … simultaneously embraces the human contradiction of needing to be inside, but preferring to be outside.’ Tel Aviv-based practice Weinstein Vaadia Architects used similar principles at the Ezra LeMarpeh rehabilitation centre in Sderot, Israel, less than a mile from the Gaza Strip and subject to frequent rocket attacks. At the heart of the necessarily fortified building lies a series of tranquil courtyards with mature, spreading trees. Architect Shai Weinstein explains: ‘The challenge was to design a bombproof building that meets strict security requirements but at the same time creates a pleasant and convenient therapeutic environment by allowing the penetration of natural light, colours of vegetation and the sky, thus opposing the stress and claustrophobia that characterise the daily routine of running for shelter when being bombed.’

The incorporation of natural features such as daylight and planted courtyards can aid with the second priority of simple navigation, says Catherine Zeliotis. ‘There’s a need to alleviate threshold anxiety; patients coming to hospital are already quite stressed about what’s going to happen so the design needs to have a clarity about the initial approach to the hospital,’ she says. ‘The entrance needs to be on a human scale with clear directions and a welcoming feel so it isn’t overwhelming. People who are already stressed can get lost easily, but if we can get daylight opportunities and links to nature through the patient journey it becomes much easier and more intuitive.’ Using different colours, varied artworks and differently designed courtyards in the building can all help staff to give clear directions and patients to remember where they are. ‘If you have to use a sign that’s really already a defeat,’ she says. At the Pars hospital, a main transparent atrium links the different parts of the hospital together, while dashes of bold colour help with wayfinding. At the new Maggie’s, created by Steven Holl at Barts, the three storeys of the building are linked by an open, curved staircase that leads patients gently through the structure of the building.

In most cases, architects are striving to create buildings that, while necessarily large, are never overwhelming. ‘We try to make sure we break down the mass of the hospital into smaller looking units that are on a more domestic scale so people feel more comfortable,’ says Zeliotis.

‘A building that is easy to understand conveys calm and peacefulness,’ adds Shai Weinstein. The process of attending hospital inevitably involves waiting, but thoughts are changing on how best to manage patients. Instead of every tiny clinic having a separate waiting area, some architects are making use of technology borrowed from the airport to keep patients in a ‘departure lounge’ scenario, only directing them to ‘go to gate’ at the last minute. Says Alex de Rijke: ‘Institutionalised environments and management procedures can make patients feel dispirited and disempowered. Cancer patients feel desperate and therefore hand over control of their lives too easily to medical processes. Their time is precious, yet huge amounts are wasted waiting in hospitals, on steel and plastic furniture in rooms without daylight, contemplating vending machines and mortality.’

His firm’s solution at the Maggie’s centre in Oldham was a holistic environment with natural views, wooden finishes and comfortable seating. Others have followed the airport analogy more closely, offering extended retail, educational possibilities and catering to make waiting around less of a burden. Stantec’s design for the Victoria Wing at the Newcastle Royal Victoria Infirmary linked the hospital and adjoining medical campus with a landscaped public street and put a sky-lit multilevel mall through the centre of the hospital, complete with food court and cinema. Not only has the stress of waiting been eased, but as people often visit the location for purely leisure reasons, the threshold stress has been largely removed. The £160m new cancer treatment centre at Guy’s Hospital was designed by Rogers Stirk Harbour +Partners in association with Stantec. The 14-storey building brought together services that were previously on eight sites and arranged them in a human-scaled environment of four stacked ‘villages’ housing a welcome area, radiotherapy, chemotherapy and outpatient units. Plenty of natural daylight and artwork combine to create an uplifting environment, while a Listening Living Room, created by BAT Studio, gives patients the chance to relax in a personalised soundscape. Image Credit: Morley Von Sternberg

At the treatment and recovery stage, architects are also promoting a more patient-centred design. ‘In the UK now, medicine is developing a more collaborative approach,’ notes Zeliotis, ‘so we provide a round table so the patient and clinician can sit next to each other rather than have the doctor on the other side of a big desk.’ She also tries to include facilities for families, including sofa beds with storage underneath so relatives of critically ill patients can easily stay overnight. Environmental controls that can be operated by the patient from bed help give some autonomy, while comfortable patient lounges, bedside entertainment and even colour-changing LED lighting features on the ceiling can relieve the boredom of even the sickest patients.

The multi-award winning Shirley Ryan AbilityLab in Chicago is a rehabilitation centre with 242 beds where patients spend an average of 24 days having intensive treatment for serious illnesses and injuries. The project was done by architecture firms HDR and Gensler, in association with CWa and EGG Office, and aimed to provide an energising, optimistic atmosphere with bright, colourful graphics along the curving, wheelchair friendly corridors and over the ceilings in rooms where patients might be confined to bed. The president of the hospital, Dr Joanne Smith, summed up what is perhaps the ultimate aim of all architects involved in healthcare design: ‘Every inch of the building is designed for care and every inch is designed for research. The central goal: better, faster recoveries for patients.’