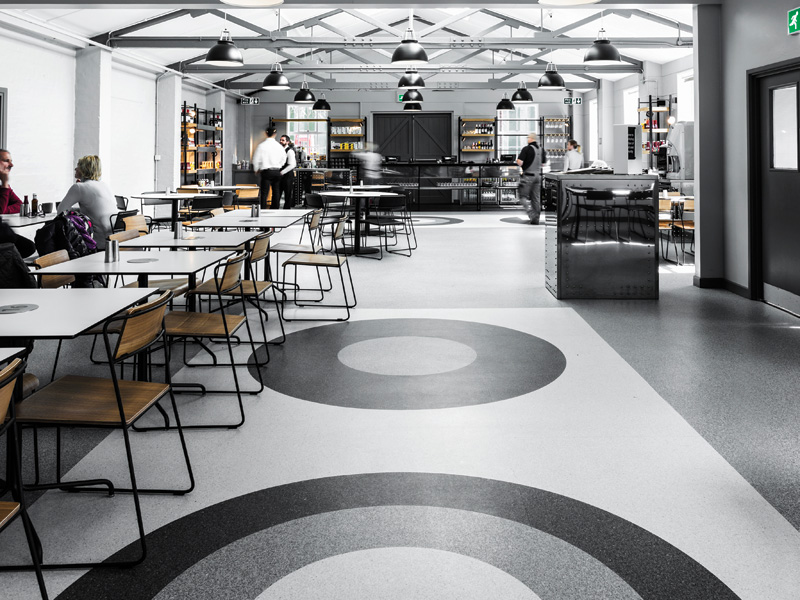 Sometimes there are flooring projects where off-the-peg just won’t do. We look at some of the bespoke innovative floor solutions.

Historically up-market shops and restaurants literally set their names in stone, with grand entrance halls and foyers often marked with the company name in mosaic.

‘This was a traditional design feature originally intended to engender a sense of trust, used widely by banks, institutions and Post Offices,’ says Philip Watts of Philip Watts Design. ‘It reinforced the idea that something was here to stay.’ It’s an idea that he has recently resurrected for a couple of projects – Ego, a Mediterranean restaurant chain where he created a GaudÍ-inspired floor logo in pebbles, and George’s Great British Kitchen where his black and white floor with the George’s name picked out in tiles gives a sense of history and gravitas to a company that is barely three years old. ‘By working the logo into the tiling we have made a deliberate attempt to suggest heritage,’ he says. ‘It is the sort of detail used on tiling in very premium offers – high-end Parisian cafes and shopping malls for example. Originally, this sort of detailing would have had to be made in mosaic, but now can be relatively easily done by printing on the tile.’ Design company Shed also looked to incorporate the name of the client into a flooring design, but in a more stylised fashion. The flooring created for luxury retailer William & Son was a combination of terrazzo with inlays of rugs bearing subtle motifs that link into the luxury goods sold by the store – from a carpet design hinting at the antlers that hang in the hand-crafted shotgun department to an edging reminiscent of the backgammon boards sold in the games section. And in the corners, linking the design together, are inlays featuring stylised company initials. Loomah designed this pure wool bespoke rug for the Hilton Metropole hotel in Birmingham, reflecting the light above it

A similar thought process is evident in the flooring design for House of Vans, a creative venue set in five railway tunnels by Waterloo station and featuring a skate park, cafe and music venue. Architect Tim Greatrex and designer Pete Hellicar created a flooring that not only featured the Vans shoe brand’s logo, but its whole design was inspired by the shoes themselves. Vans’ iconic sole inspired the layout of the hexagon and diamond pattern, with the black and white instantly recognisable to enthusiasts as the essence of Old Skool trainers translated into flooring. Even the choice of rubber from DRF Rubber Flooring was linked to the brand, as it is the material for the Vans soles and the core material of the original Vans Doren Rubber Company. Some designers prefer a more subtle approach. SHH director Neil Hogan, who heads up the hospitality division, explains: ‘Floors are very important in the hospitality world as they are quite large areas and a large ticket item. In my opinion putting a big logo on the floor is not going to be the most elegant solution. The association of walking over your logo or, even worse, wiping your feet on it, is not for every company. It was done a lot in the Twenties with magnificent vestibules with names in tiles and brass, but that is very expensive and not many businesses want their branding to be in that location any more.’ Hogan recently worked on three flooring projects for the Imperial War Museum – at Duxford, the Churchill War Rooms and Tom’s Kitchen at HMS Belfast. The first two have feature floors that link in firmly with the history that the attractions are promoting: the Duxford floor was inspired by the roundels of Second World War military planes, while that at the Cabinet War Rooms was based on the patterns made by window tape used in wartime to prevent injuries from broken glass. All three floors, in Polyflor vinyl, share the same military-style grey colour palette. ‘We had to find a common language that would link the offers together, as a lot of visitors are repeat ones across the portfolio,’ notes Hogan. Often designers look to some aspect of the building’s purpose, history or surroundings for inspiration. For example, the stunning black and white floor in the grand hall of the Mandarin Oriental Hotel in Guangzhou, China, was designed by Tony Chi & Associates with curved marble strips laid in a pattern designed to symbolise the flowing water of the Pearl River that flows through the city. And closer to home, architecture practice De Matos Ryan took inspiration from shelves of books to create bespoke flooring for the British Library. ‘The astonishing and mesmerising “heart” to the British Library is the six-storey bronze and glass tower containing the King’s Library, the 65,000 books acquired by King George III and given to the nation by his son, George IV. The shelves glow with the colour and richness of the leather and vellum bindings, and the colour and rhythm of this new floor is directly inspired by the King’s Library’s book stacks and their alternating patterns,’ says director Jose Esteves de Matos. In the main, creating bespoke floors is a fairly time consuming process, but technology could be about to change all that, with a new LED flooring capable of lighting up with messages, directions, advertisements and even animations as customers walk past. Called Luminous vinyl, the new product from Tarkett and Philips Lighting means that, in theory, floors could change hour by hour rather than every 10 years or so.

‘With Luminous vinyl flooring we take our innovation strategy to the next level,’ says Anne-Christine Ayed, Tarkett’s director of research innovation, ‘allowing flooring to grab people’s attention in an unprecedented way.’