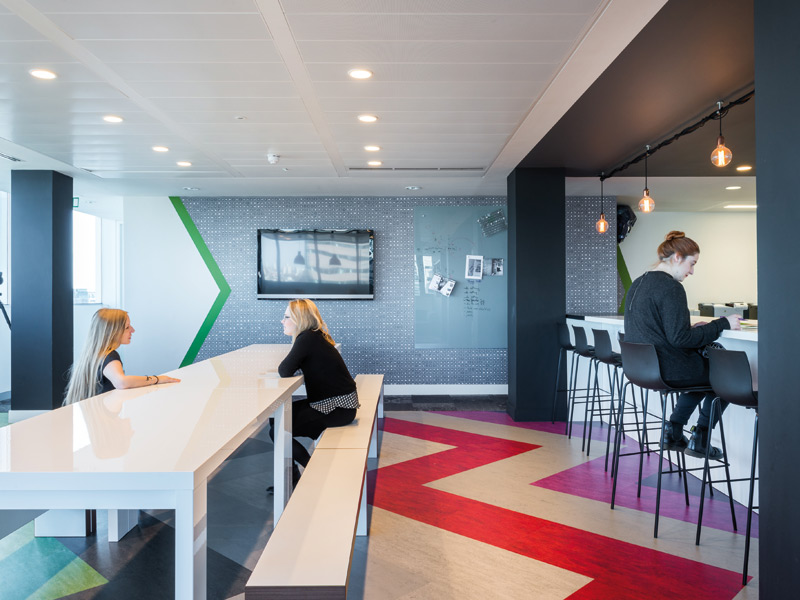 Different projects have different priorities when it comes to flooring.

Flooring. It's everywhere. And yet, not always the first item on the agenda when planning a project. Indeed, it's often last. And then no one notices it unless something goes awry -- unless you want to make a statement as with bright pink Bolon in a break-out area. And then it seems, everyone notices it. And loves it.

But if it doesn't work, then everyone will have an opinion on why. Unlike a ceiling or a roof or a wall, the user will be connected to the floor in a personal and tactile way so, although it's not the first thought in a design project, it needs to be a well-considered one.

But of course the venue is everything. Floors in medical environments have to adhere to regulations centred on safety and hygiene, those in plush resorts are about enhancing the experience of being there, while those in a merchant bank or a lawyer's office are often a self-conscious statement about the company and its creativity (or lack of it) and its deep pockets.

Those in prisons and police-custody areas are quite different again. The firm Degafloor specialises in that area and states on its website that flooring here has to be 'strict, yet simple. Floors must be tough, hygienic and easy to maintain. Moreover, floor finishes must be extremely difficult to remove so as to avoid them being used as weapons'. It eschews the current and widespread use of vinyl-sheet flooring in many prisons for seamless resin sheeting from its own Flake System.

Meanwhile, issues around cleaning, control of infection, colour contrasts and slip resistance take priority when thinking floors for the healthcare sector. Trinity Hospice in south-west London for instance uses Marmoleum due to its durability, sustainability and innovative design options. And then there are 'green floors', able to generate energy from pedestrian traffic and perhaps the most exciting type of flooring of the near future.

Pavegen is a technology company founded in 2009, which creates flooring that harnesses the energy of footsteps. Though its projects have been small-scale to date, that's just about to change. You can now glimpse samples of Pavegen's 'power flooring' in places such as Heathrow's Terminal 3. Here, 'Power from your footsteps' is the strap line as passengers walk past coloured lighting strips on the adjacent walls, and for which they can take credit. And Harrods received 10 such tiles from Pavegen in March, which power LED lighting. But Pavegen's biggest UK project will be the installation of pedestrian-powered floor tiles at Westfield at Stratford, East London. The idea will be to promote sustainability in retail in one of Europe's largest shopping centres.

Pavegen's largest global project thus far has been the installation of 200 tiles on a Shell-sponsored football pitch in a Rio de Janeiro favela. Here the tiles work day and night alongside solar panels to power the lights for up to 10 hours on a full battery, thereby creating the world's first ever people-powered football pitch! Such 'power flooring' is already present in random locations, such as St Omer station in France and at Tokyo railway stations. But its potential is enormous and it's hard to see why this wouldn't become the norm in the future for any venue with a high footfall. The possibilities are endless!