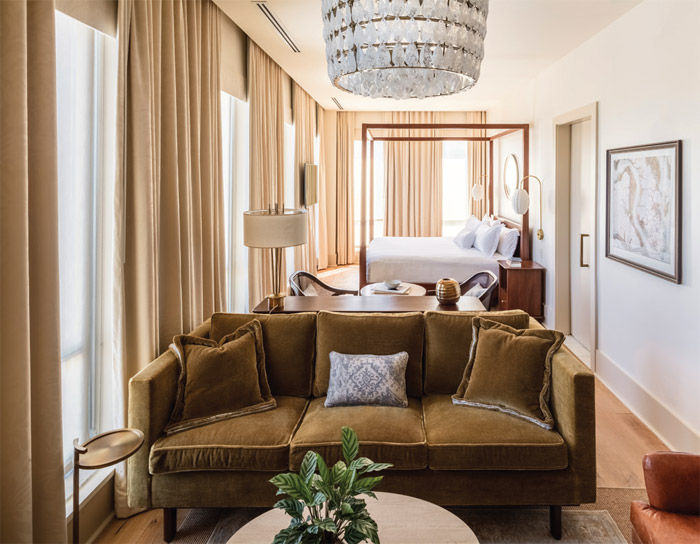 Welcoming entries from designers world-wide, the FX International Design Awards boasts a range of categories for both projects and products, and is open to everyone from suppliers to architects. The deadline for entries to the 2020 FX Awards is 25th July – so make sure to get your project or product in soon, and click here for more information.

Following the line of the street, Nobu Hotel has a strong linear form and occupies a tight urban plot. Taking over the beginnings of the project from Ron Arad, Ben Adams Architects had to ensure that the hotel reflected its immediate context – as all Nobu buildings are required to do. As a result, the design team blended Nobu’s values of ‘simple luxury’ with the vibrancy of Shoreditch, and have used a palette of concrete, bronze, timber, and glass, with creative textiles and warm fabrics, to create a simple, raw aesthetic. Looking beyond the brief, Ben Adams Architect wanted to explore the possibility of the space; they have combined the industrial heritage of the area with rich, natural materials, creating spaces including a double-height bar and restaurant, a landscaped garden, and 150 spacious guest rooms on the upper floors. Welcoming travellers and designers alike, Nobu Hotel London combines sophisticated materials with an integrated urban design to cement itself into Shoreditch’s evolving landscape.

The Dewberry Hotel in Charleston, by Studio Dewberry

Brought back to life over an eight-year period, The Dewberry Hotel is a unique mid-century modern gem that occupies the former L. Mendel Rivers Federal Building in downtown Charleston. Juxtaposing the past and the present, Studio Dewberry has cleverly mixed local materials with design elements that hint at the hotel’s mid-century modern origin, creating a contemporary hotel that embraces modern sensibilities while using the city’s ‘old soul’ for many touchpoints.

Image: Courtesy of the Dewberry

Honouring the building’s original architecture, The Dewberry features a lime-washed brick façade; vintage marble and metal work adorns the entry canopy, ballroom roof and the rooftop function space. Inside, Studio Dewberry has transformed the hotel by creating clean lines, which are softened by elegant wood finishes, and a mixture of handcrafted custom and curated period furnishings. In the guest rooms and suites, lush fabrics and touches of marble and brass create a timeless, contemporary feel.

Combining art, brutalism and luxury, At Six Hotel is a contemporary version of the classic metropolitan grand hotel. Ten floors of guest rooms feature warm greys and natural materials, which complement the soft furnishing and classic furniture to create luxurious spaces that have been designed to look residential, and that will ‘wear-in’ rather than wearing out. The building now features a new extension, and looks beyond the neighbouring buildings out across the skyline of Stockholm. Universal Design Studio sought to bring desirability and luxury to the brutalist building that houses At Six Hotel by commissioning Scandinavian designers to create pieces for the hotel. As a result, several artisans have made unique pieces for the hotel, including sculptural, hand-blown vessels by glassmaker Carina Seth Anderson, custom lighting by Rubn, and a communal table carved from a single elm trunk by Lies-Marie Hoffman.

The Temple House, by Make Architects

Offering 100 guest rooms, 42 serviced apartments and an assortment of extensive public spaces, The Temple House is a visually innovative hotel that forms a key element of the Chengdu Daci Temple Cultural and Commercial Complex. Incorporating landscaping, materials and features that reference the region’s unique scenery and architectural style, The Temple House has been designed with a typical Sichuan courthouse configuration. Reconciling the old with the new, the hotel’s guest rooms feature bespoke wooden furniture, natural fabrics and sculptural décor to create a luxurious, atmospheric feel. There is also a juxtaposition between the dark-timber panelling and the neutral, light interiors which helps transform the rooms into a comfortable, urban retreat that is warm and inviting. The Temple House also boasts custom-made furniture and traditional Chinese screens to enhance the sense of serenity, and create a distinct, contextually appropriate sense of place.

Described as a ‘journey of unfoldment of both the physical and psychological senses’, TUVE’s design has been created to excite guests as they discover the hotel’s interiors. For the project, Design Systems drew on common materials such as brass, oak, concrete and wired glass; the design team’s challenge was to enhance these materials’ natural beauty, by exploring the textures and using surface treatment techniques. In the guest rooms, the intricate details of the team’s craftsmanship reveals the products qualities and create a sophisticated environment that guests will want to interact with. Semi-transparent wired glass, for example, has been used as a partition to cover the bathroom while still maximising illumination and spaciousness. Meanwhile, the lighting throughout the hotel reveals the texture of materials and finishes, further enhancing the design.