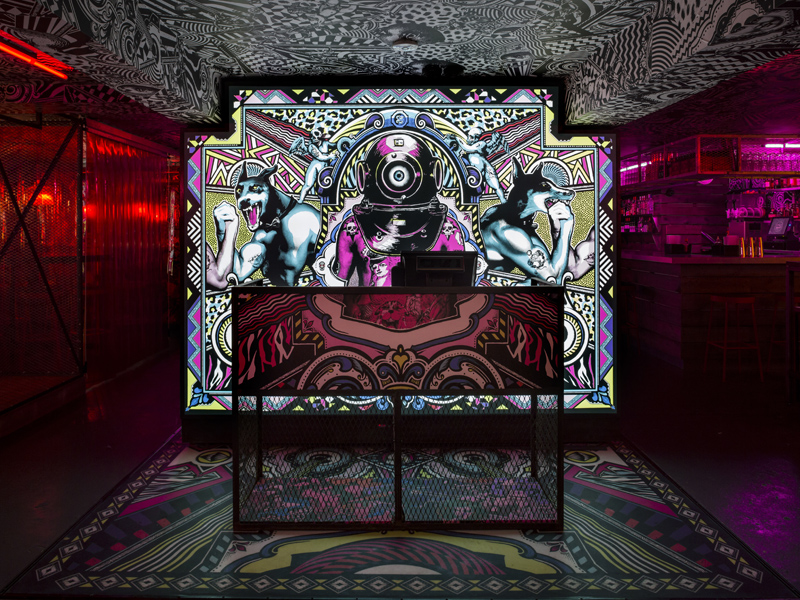 Having created schemes for each of the wildly successful burger restaurants in the MEAT... chain, SHED Architecture & Design has gone hell for leather on the latest one, MEATliquor Brighton

The word 'sin' glows in yellow light from behind the bar. A clown with sinister jagged teeth - the stuff of nightmares for many - glowers at diners as they sit at blue-upholstered booth seating. There are weird graphics everywhere: in some, a pair of creatures, each with the muscle-bound body of a man but the head of a vicious-looking dog, arm-wrestle; for what? Some poor soul's soul, no doubt.

This is Meat Liquor, Brighton, the latest in the stable of MEAT... restaurants (now including MEATliquor London, MEATmarket and MEATmission); and no, it's not just like this on Halloween.

According to the designers the interior themes 'reference the energy and aesthetic of the fantastical Brighton fairgrounds, the garish and sometimes sinister, heady-glare of glowing arcades and authenticity of the mismatched seascape, all infused with seductive and meaty undertones.'

Here's what else they have to say about it:

A dark grey exterior is starkly contrasted with a colourful wit and set alive with pink 'liquor' neons, suspended in windows and framed by caged red, fluorescent strip lights. As the lights smoulder through the tinted glass, illuminated boxed out lettering in pink and turquoise spell MEAT over a porch which explodes with colour and unique, fairground inspired murals.

Patterns are rife throughout, with MEATliquor's ceilings and walls blanketed in black and white fly posters; surreal, dizzying patterns of leopard prints, smiling moons and waltzer inspired graphics are illuminated by hues of red, purple and pink - spilling from the strip lights overhead. The rear wall and 6.5 metre long bar with its galvanised metal top are clad in beautifully silvered pine - drawing direct reference to an old, weathered pier.

Known for its daring interiors, each borne of location - MEAT liquor Brighton is a space full of theatricality and following a successful partnership on 3 existing London spaces - Shed again commissioned creatives 'Ilovedust' to dramatise the space, and whose fantastical illustrations and obscure sea-side personas bring the restaurant aptly to life; A tattooed deep sea diver displayed across a 3m wide lightbox greets guests as they arrive and a 2 metre high, neon flamingo dances glamorously next to eaters. Further artworks include a 13 metre printed vinyl rug that stretches along the centre of the restaurant. The succession of 'peephole' Georgian wire glass tables, invite guests to look down onto this whirlwind of colour.

The 'MEAT street scape' is by far the theatrical masterpiece of the room though. Running the length of one side of the restaurant, it features partitions of metal mesh, red 'butcher' curtains and rooms papered in call-card inspired graphics which set up a series of bespoke, private booths each with their own style and design. If that wasn't enough to get you in a spin, even the route to the toilets is set to impress. Two vintage inspired fairground mirrors are mounted to a black wall displaying a sea of gloss icons that pave the route down a narrow corridor.

Additional banquette seating upholstered in bright blue and purple faux leather, galvanised metal and large round mirrored tables, is mismatched with an assortment of crystal and wire lamp shades; the loud and eclectic mix of scenery is further pronounced by the wonderfully bizarre signage including an original Clacton on-Sea clown, revamped with a rather sinister sneer.

'MEATliquor Brighton lives and breathes its sea-side surroundings. We wanted to ensure we brought every inch of Brighton's energy into these interiors, right through from the seating, to the tables to the wall designs and light fittings. The restaurant has an exciting edge that we hope will provide a very unique eating experience.' Shed.