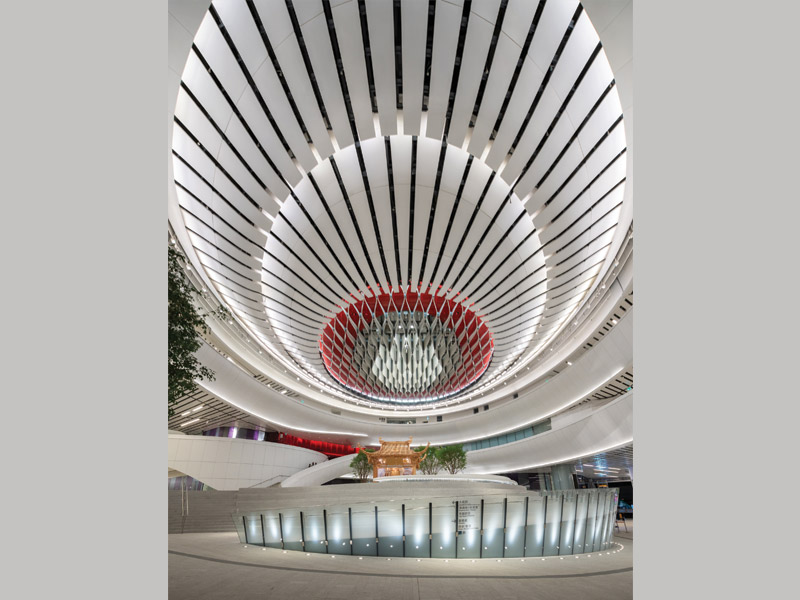 More than two decades after Hong Kong authorities initially proposed a new cultural quarter on the Kowloon Peninsula, the development’s first venue has finally opened its doors. Well, figuratively at least — the soaring openings found at each corner of the Xiqu Centre are permanently agape and thus distinctly doorless.

The theatre’s completion marks a significant milestone for the West Kowloon Cultural District (WKCD), an ambitious attempt to announce Hong Kong as Asia’s leading arts destination. Set across 40ha of land reclaimed from Victoria Harbour in the early Noughties (with the development’s westernmost tip now jutting out into the harbour), its masterplan features dozens of public and commercial structures, including designs by the likes of Herzog & de Meuron and UNStudio. The atrium is envisioned as a light-filled, welcoming ‘urban plaza’

For now, however, the HK$2.7bn (£268m) Xiqu Centre stands alone amid the construction, its squat form conspicuous in a city defined by verticality. A competition-winning collaboration between Canadian firm Revery Architecture — known as Bing Thom Architects before its founder’s death in 2016 — and the Hong Kong-based Ronald Lu & Partners, the venue is dedicated to Cantonese opera. And this function is reflected quite literally in the building’s exterior.

Created modularly from CNC-cut aluminium piping, the structure’s outer casing evokes rippled theatre curtains. From afar, the pattern of curved fins gives the building the textural quality of flowing fabric (while providing shade, for improved thermal performance). And it’s where these ‘curtains’ part that the aforementioned entranceways stand, luring passersby into the light-filled public atrium at the structure’s heart. The curved, rippling exterior is created from CNC-cut aluminium piping

This configuration is, in itself, unusual: such venues normally revolve around the performance space. Yet here, a Grand Theatre of 1,073 seats has been hidden from sight, lifted 27m into building’s upper reaches. The atypical arrangement provides acoustic isolation from Kowloon’s noisy streets. But it also reflects the project’s civic character, according to Revery’s design principal Venelin Kokalov, who has led the firm since Thom’s passing.

‘It’s not [meant to be] a sculpture that’s walked around,’ he explains while we tour the site. ‘Performing arts venues are usually solid objects — they’re not friendly buildings. But it’s a typology that is [normally only] used for two or three hours a day. So we lifted the theatre up in the space, and this way we free up this plaza. It’s more about the negative — the void is more important for us.’

The result is a towering curvilinear cavity decked in granite and white concrete. Its clean, flowing lines may not scream Chinese opera, but they better articulate the building’s mission: offering a modern home to a traditional art form. The atrium’s smoothed edges and coiled walkways lead around a circular central space intended for public performances and exhibitions. Indoor trees help to further erode the distinction between inside and out. This ‘urban plaza’, as Kokalov prefers to call it, currently serves as a place to wander, with a smattering of locals seen reclining on deep, flat seating or loitering around a wide stair set.

Most of the Xiqu Centre’s secondary functions are set back from — or around — the atrium, including a seminar hall and a number of small studios, as well as retail and F&B facilities. They are reached via escalators of varying heights, which join a series of pathways that wrap around the building’s hollow centre, peering over the plaza like the elevated galleries of a theatre. The last of the tunnel-like escalators delivers visitors into a Zaha Hadid-esque foyer flanked by two rooftop gardens (in Hong Kong, it is rightly considered a sin to waste vistas of the city’s postcard skyline). In keeping with the aesthetic of other public spaces, the lobby is clean, white and well lit, almost clinically so by night.

Its undulating forms continue into the cavernous but deceptively intimate Grand Theatre. Oblong and ovate shapes appear cut out from the walls, while blocks of seats have been encased by low, curved walls. The ceiling resembles overlapping waves, rolling gently to the back of the room. There are few hard edges to speak of — even the rows of stalls gently bend in the middle. But while the difference between inside and out is relatively fluid, the distinction between public and performance spaces feels far more abrupt. The building’s hard surfaces make way for demure velvet seats and dark wood; its pale palette is suddenly muted by shades of purple and taupe that appear almost black in low light. It’s a contrast replicated in the 200-seat Tea House Theatre, a smaller space for more casual performances (accompanied by servings of tea and dim sum).

Kokalov wants these juxtapositions to transport audiences away from their surroundings — for the duration of the show, at least, after which they’re ejected back to the colder foyers for a visual palette-cleanser. Yet, the architect is also aware that the majority of the building’s visitors will never experience the theatres themselves. Most foot traffic at the Xiqu Centre, which lies at the far eastern end of the WKCD, will result from its position as an entry point for pedestrians (including those entering via underground passages from two connected metro stations). ‘The concept isn’t to be a destination,’ Kokalov explains, ‘it’s to be a gateway.’ For this reason, judging the success of Revery’s work feels premature. The way in which people flow through the space is fundamental to the designers’ vision, and for now there simply isn’t the footfall.

But come the mid-2020s, when the district is scheduled to complete, the Xiqu Centre’s relationship with its wider context should come into clearer focus. By then, the theatre will have been joined by numerous other arts facilities, many of which look set to be architecturally eye-catching. Most anticipated among them is the Herzog and de Meuron-led museum of visual culture, M+, which could — if hushed local optimism is to be believed — serve as an Asian equivalent to the likes of Tate Modern and MoMA. The 60,000 sq m project, which topped out last November, comprises vertical and horizontal slabs joined perpendicularly into an upside-down T.

The museum is due to open in 2020. In the meantime, there is the M+ Pavilion, which opened in 2016, designed by a local design team consisting of VPANG Architects with JET and Lisa Cheung. This hosts M+ exhibitions in the run-up to the completion of the museum, after which it will become a new space for artists, designers and organisations to stage small-scale exhibitions and events. Herzog and de Meuron’s museum of visual culture, M+, is due to open in 2020

Next to M+, the waterfront Lyric Theatre will differ in function from the Xiqu Centre by hosting more modern and internationally focused performances. Designed by Dutch firm UNStudio (along with Hong Kong’s AD+RG), it will house three theatres ranging from 270 to 1,450 seats in size. The latest renderings suggest that the structure’s glass-fronted, round-edged facade will contrast with, or perhaps offset, the more solid and angular M+.

To their west will lie a waterfront promenade, grassy parks and the Hong Kong Palace Museum, a more recent addition to the district. The work of local firm Rocco Design Architects, the top-heavy but delicately balanced structure will house artefacts from Beijing’s Palace Museum. Fittingly, its design puts a Hong Kong spin on the Forbidden City’s architecture, borrowing the concept of successive courtyards but having them twist vertically through the building’s interior. The Hong Kong Palace Museum, designed by Rocco Design Architects and to be sited at WKCD’s west end, will house
artefacts from Beijing’s Palace Museum

Then there’s West Kowloon’s new high-speed railway station, designed by Andrew Bromberg at Aedas and opened last September, that has drastically reduced journey times from mainland China. While lying just outside the cultural district, the long, low terminus will inject an essential flow of tourists to the development.

Arriving underground, passengers are immediately met by a huge glass facade overlooking Hong Kong’s skyline, before being fed into interconnected walkways that will, one day, lead to the heart of the new arts quarter. Yet the structure serves the neighbourhood in more immediate ways, its roof doubling up as a garden that rises almost seamlessly from ground level before sweeping gracefully across the largely pedestrianised site. The West Kowloon station, designed by Andrew Bromberg at Aedas and boasting an arched roof garden, will serve as a
vital transoport hub for the WKCD

Quite how these profoundly different landmarks will interact remains to be seen. But a prescriptive architectural ethos is neither part of the plan nor even desirable, according to Duncan Pescod, CEO of the West Kowloon Cultural District Authority.

‘You don’t want a homogenous approach — that would be terribly boring,’ he explains during an interview at the district’s site office. ‘We told designers: “You have to make reference to your adjacent buildings, or the ones we know about”… But architects have to have their own creativity.’

The West Kowloon station, designed by Andrew Bromberg at Aedas

A wooden model in Pescod’s office reveals just how much of the district is yet to be shaped. Many of the site’s buildings have not yet been commissioned, and, for now, they appear as formless grey blocks on his model masterplan. As such, the wider visual language remains somewhat undefined.

This tightly packed masterplan has undergone significant changes since 2002, when Foster + Partners won the initial design competition. The firm’s proposal for a sweeping canopy across the whole site was eventually scrapped and the plan significantly revised. Then, in 2010, architects were once more invited to propose designs, with Norman Foster’s firm winning again — this time with an entirely different scheme. Amid political wrangling over everything from budgets to contracting, this new plan has also undergone significant modifications. ‘You stick to the guiding principles, but you reflect the reality,’ Pescod explains, pragmatically.

Yet some of Foster’s most important features have been retained, such as the grassy Art Park and a basement complex for roads and parking. Both reflect the ‘guiding principles’ alluded to, namely openness and ease of access. Pescod says that 23 of the site’s 40 hectares have been dedicated to squares, grass and other public spaces.

‘It’s inherent in the design philosophy that [the district] should be publicly accessible [and] that all the traffic — transport, parking, deliveries — is underground. So at ground level, there’s a purely pedestrianised area that can be very human in scale. It’s designed to be very welcoming. ‘We don’t want culture in boxes,’ he adds. ‘From an architectural point of view, transparency and permeability is going to be very important.’

This article was originally published in Blueprint issue 363. Buy the issue here, or subscribe to Blueprint 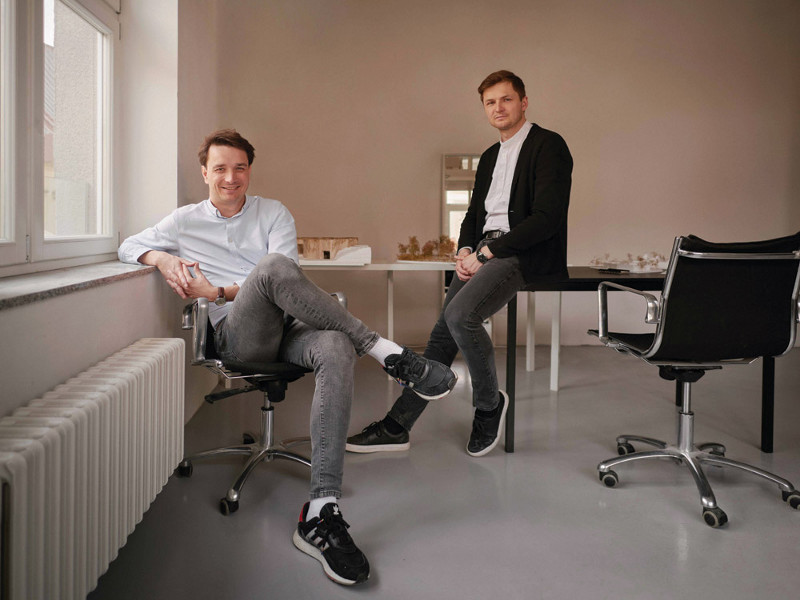