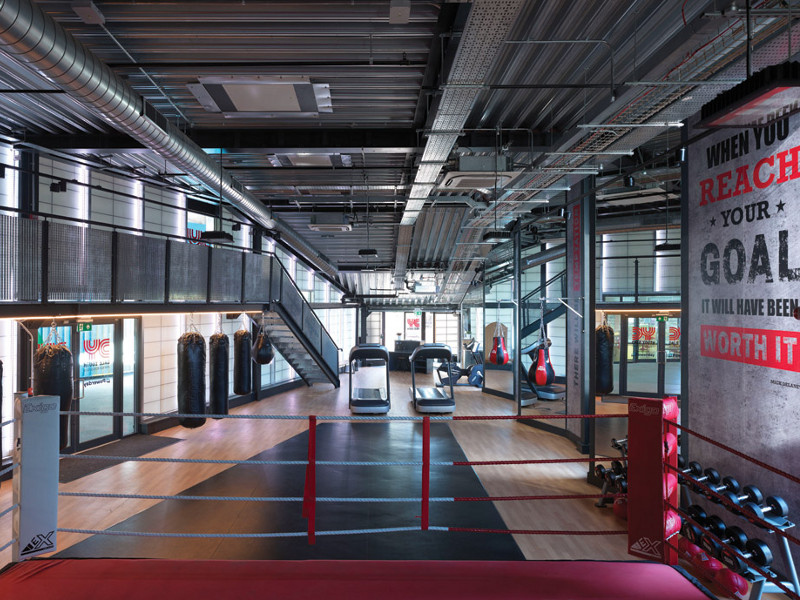 More than two years on from the Grenfell Tower fire in June 2017, many of the promises made in the aftershock of the tragedy have still not been fulfilled. Residents who lost their homes have not been rehoused, and cladding proven to be a fire hazard is still in place on social and private properties across the UK. A year old last month, however, is a project completed by architects Featherstone Young for the BBC and the Westway Trust that has replaced community facilities destroyed in the fire. Bay 20, situated under the Westway flyover, provides a new home for the Dale Youth Amateur Boxing Club, which previously occupied the first floor of Grenfell Tower, although the two-part project also offers a welcoming community centre for local residents. Completed in just a few months, the project was largely a charitable mission, orchestrated by BBC TV’s The Big Build with end-user the Westway Trust (the show was broadcast in late 2018). Featherstone Young offered its architectural services free of charge, and build companies, including main contractor Galliard Homes, donated goods and services worth a sum of almost £2m. Both buildings are located beneath the Westway

Dale Youth had been in Grenfell Tower since 1999, but after the fire and before this project stepped in it had to operate from a nearby carpark. The club is deeply embedded in the community, supporting local schools, residents and unemployment initiatives. Beyond its achievements in producing boxing champions such as Olympic gold medallist James DeGale and world champion George Groves, the work it does with local youth meant its absence was sorely felt and its restoration hugely important to a community that had lost so much. As Graham Gater, the club’s chairman, has said, Dale Youth provides ‘the impetus and inspiration to shape the lives and improve the health and mental wellbeing of the local community, with a focus on young people from marginalised and socio-economically deprived backgrounds. The legacy will live on for decades.’ The yellow, green and blue metal cladding of the two-storey community centre

The choice of a community centre along with a new home for the boxing club came after public consultation workshops. The community centre provides a hall, reception area with seating, four meeting rooms, and a kitchen, but as the local population is diverse with many different needs, these spaces have been created to cater for many different activities, following Featherstone Young’s concept of ‘baggy space’ – successfully used in previous community projects such as the Ty Pawb arts centre in Wrexham.

The design for the boxing club was more specific: a single-storey building with mezzanine floor includes a boxing ring, gym and training areas, as well as changing rooms with showers and WCs. For the interiors, the overall colour scheme is simple, with red, black and white shades among the glass, wooden flooring, concrete and exposed ceiling elements. The main decorative components are encouraging slogans on the walls. Slogans adorn the walls of the boxing club

Although the space might be ‘baggy’, making sure it reads as a welcoming public area is important. For Bay 20, this started in the external area. A diagonal ‘social street’ not only welcomes visitors to the two new facilities, but creates a well-lit and open route between pedestrian and cycle routes and the public Maxilla gardens. Reflecting the work the boxing club has done for the community, the building materials help integrate the facility into the public realm. A translucent toughened-glass wall, which is illuminated at night, reveals to passersby the activity happening inside. The idea is that these facilities, and the spill-over space of the ‘social street’, can be used by the community, bringing life back into what was previously a mix of inaccessible, undesirable and dangerously secluded spaces. Beyond replacing what was lost in the fire, Bay 20 fills a space that has been a problem since the Westway’s construction; the demolition of housing for the roadway may have made West London more accessible, but it left pockets of uninviting areas beneath that were difficult to make use of. With its yellow, green and blue metal cladding, the new community centre stands out from the concrete of the Westway, advertising its now-useful presence to locals. Although tucked away under the domineering flyover, the second floor of the community centre is cantilevered, poking out from under the road roughly 2.5m into Maxilla gardens, helping this green space feel more connected and inviting too.

Previous attempts to do something with Bay 20 of the Westway had fallen flat, but with the impetus behind this project it has been a success, and as Jeremy Young of Featherstone Young proudly states, it ‘demonstrates how a well-considered, complex building can be realised from inception to completion in only five months – and provide a valuable and permanent community resource for the future’.
featherstoneyoung.com