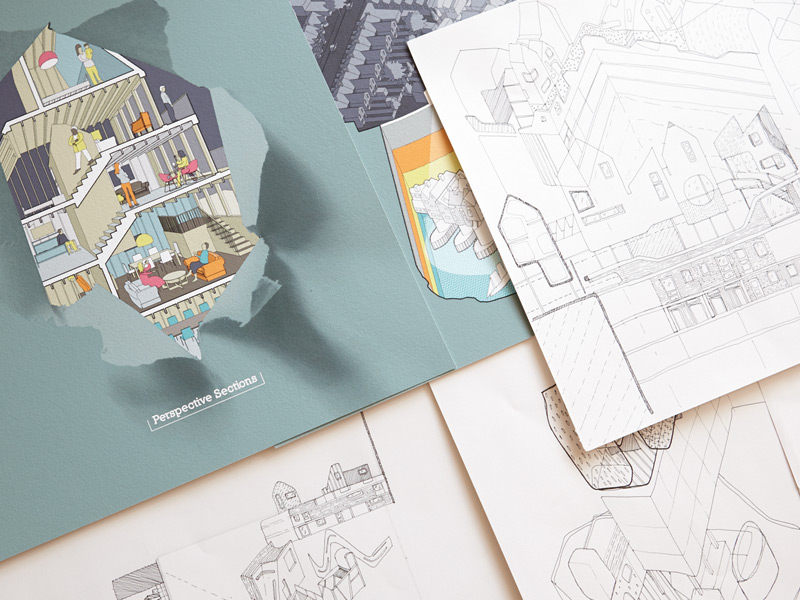 Returning for a seventh year, Designers in Residence at the Design Museum invited four up-and-coming designers to respond to the theme of disruption. From a solution to Britain’s housing shortage and a hypothetical legal case to a working cash machine and a den-building construction system for children, each designer has diverged from traditional practices and proposed new, unexpected ideas. Here the residents talk about the experience and what they hope to take away from it. An exhibition of their work is on display at the Design Museum until 8 March.

Designers in Residence has allowed me the opportunity to develop ideas and attitudes towards housing design that I hope will influence my real-world practice over the coming years. My project proposes two models of community-focused housing that borrow ideas from the social and spatial structures of commonly overlooked 'bad' housing from London's past. The first is a co-operative self-build scheme based around ideas learned from the slums while the second is a combined living and working structure inspired by the old London Bridge. Both examples are conceived as models for housing that can be added to inner London housing estates, utilising unused space such as roof tops, undercrofts and car parks. It is essential when dealing with a vast subject such as housing to maintain the focus on a specific area of its design. Designers in Residence offered the unique opportunity to develop my ideas with a museum audience in mind, which enforces the need to distil the work down to its core essence. I believe that this is a useful test for any speculative piece of work.

My project sits within a broader body of research into the design of sociable space in mass housing by my studio Projects Office. We are currently embarking on the design of two homes where sociability is the core design driver. The first brings one decentralised family together while the second aims to give a couple space both with and apart from their grandchildren.

Designer and filmmaker, founder of research studio The Department of No.

I applied to Designers in Residence because in the past I have exhibited internationally but have never in London, among my peers, and I thought it would be a great opportunity to do so. I also have previously made quite complex work that often exists in academic publications and I wanted to experiment a bit more within a public museum, rather than in a fine art or academic context. I used the theme of disruption as a way to reposition how we look at traditional aspects of law and legal proceedings. The project uses design as a material to reposition the law court as a television studio. A law court is often seen as literal demonstration theatre: spatially laid out with strict rules and acute awareness of sightlines, with participation, and an audience in its viewing gallery, much like the broadcasting constructs of a TV show. Architecturally and technologically the courts' proceedings are changing. Through the introduction of cameras, live feeds and glass separating walls, observations made by participating bodies (such as members of the jury or audiences) are becoming filtered, edited and reframed. Using the language of film and film-making, the work seeks to explore how legal constructs can be manipulated by the nature in which the evidence is received, re-enacted and recounted, much like the mixing of film genres.

I have various shows coming up, including one at FACT Liverpool and planned for next year is the finishing of a feature film-length script.

Designer, studied architecture at the University of Bath

I trained as an architect (I start my Part 2 at London Met soon) but importantly I try to work across the design disciplines as much as possible, having also worked in product and furniture design. My Designers in Residence project is the design of a new construction toy that builds dens, forts and play houses; basically an architectural play kit. It wasn't directly a response to the disruption theme but the project was based on the question 'What if LEGO wasn't a brick?' - A disruptive thought in the sense that it challenges convention to offer up new opportunities. It's the dream scenario for any designer to be commissioned with a project that they can have creative control over, and it's even better when you consider that an institution like the Design Museum is going to support and promote you, and that is all the more special at an early stage of your career. It's an invaluable privilege.

I have learned so much, simply because it was far bigger than any opportunity I have had to date. It has taught me about managing a project and working with other parties (manufacturers, press officers, clients, film makers; types of collaborations you don't have working independently). I learned through experience a lot about professional behaviour: how to be assertive and management-savvy, avoiding the unpleasant extremes of either being passive or unreasonable. I will be looking to develop this project further, for its own sake and commercially. I have filed for a patent and design registrations, but I also wish to work on other designs and may at some stage complete my training as an architect.

I trained as a product designer, but in the studio we work across a lot of different media, and on a mix of commercial and speculative projects. The majority of work we do is for exhibitions, but the opportunity to show work at the Design Museum was an opportunity I didn't want to miss. I was really excited to see the brief this year -- disruption is a word with myriad meanings, but it is something, which subtly or explicitly, features in most of our studio's work. I wanted to have the time and space to delve into what disruption meant to me, and be able to explore ideas around that theme without the normal constraints. It took a while for me to reach my final project theme. I knew I wanted to look at economics in relation to the theme of disruption; it is an area I am very interested in, but also one I felt was in need of a bit of a shake-up. I became interested in the products and artefacts that exist within economics, and how they provide a medium for us to interact with and interpret money. Things like ATMs, credit cards and card readers have been meticulously designed, and their designs influence how we think about and engage with economics. I wanted to challenge their design and create a sort of 'economic playground' to provide a physical and mental space for people to explore different ideas of economics without the constraints of the real world. It has whetted my appetite to explore more design projects within the world of economics. But one of the most important things of DiR was the ability to get to know three brilliant designers from very different backgrounds.