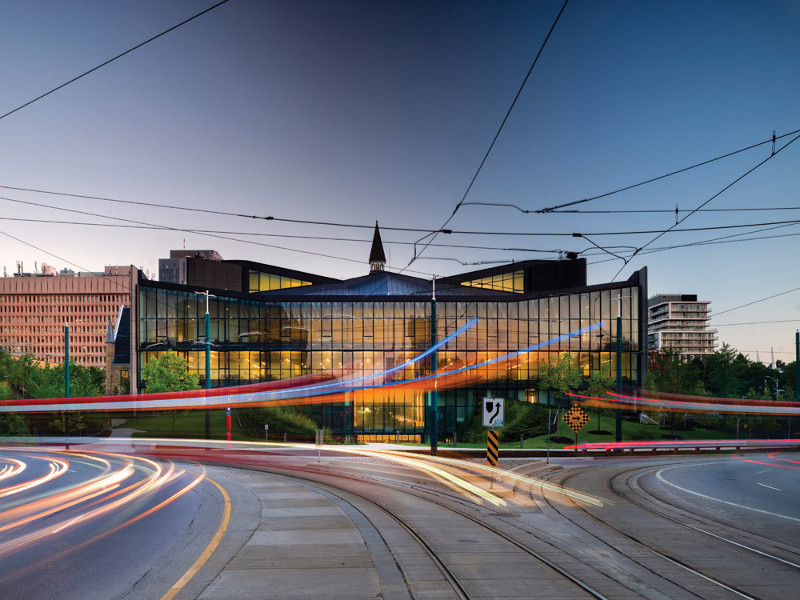 Boston-based NADAAA has delivered a new home for the University of Toronto’s architecture and design faculty that boldly fuses strong modern geometries with an existing Victorian building. The project inspires an architectural dialogue as well as a collaborative study culture

The late American architectural historian Vincent Scully believed that architecture should be a conversation between eras. Rarely does this metaphor play out with such drama as in the Daniels Building at the University of Toronto, where two very distinct architectural discourses run together on a prominent urban site.

This building of two parts, now home to the university’s faculty of architecture, landscape and design, occupies a circle in the middle of a broad avenue. To the south it is 1870s Victorian Gothic, all gables and turrets in yellow brick, stone and slate. To the north, a recent addition by NADAAA responds with curtain wall, silky polished concrete and dark-grey concrete cladding panels. There is continuity — both halves are spiky and asymmetrical — and also contrast. The Daniels Building occupies a circle in the middle of Spadina Avenue in central Toronto. Image Credit: Michael Muraz

That is entirely deliberate. ‘The building is didactic,’ says Nader Tehrani, principal at the Boston-based firm NADAAA, who oversaw the project with partner Katherine Faulkner. It not only houses the university’s John H Daniels faculty, he explains — which includes architecture, visual studies, urban design and architecture — ‘but it embodies that institution,’ he adds. ‘It’s a pedagogical tool.’ New verdant landscaping on the site’s northern side descends to a courtyard which links in to the faculty’s Fabrication Lab. Image credit: Nic Lehoux

The 15,000 sq m project is fertile terrain for a budding architect. Almost every aspect of the design, from siting through programming through the drainage of the roof, has been considered and reconsidered through a design process that is ongoing. Though the first phase was occupied in 2017, while many aspects of the building were still under construction, this year has seen the vision come together through key completions. Seen in plan, the building appears straightforward. ‘The original building was a U,’ explains the dean of the school, Richard Sommer, ‘and the new addition completes the U to make a square.’ The space at the centre, once a quadrangle, has become the so-called Principal Hall, a gathering space for public lectures, major crit sessions and classes. This space connects via small internal windows to the older building, and in one great upward diagonal slash to an elevated studio space in the new wing.

There is continuity in the spiky, asymmetric style of both the old and new buildings, as well as contrast. Image credit: Nic Lehoux

This suggests the basic distinction between old and new, and between two types of spaces — small and rectilinear vs large and irregular. The old building, originally constructed as a Presbyterian seminary, ‘has a collegiate quality’, Sommer explains, ‘and it lends itself very well to certain aspects of what we do as a school’. Newly renovated by NADAAA with heritage specialists ERA Architects, it now houses faculty and administrative offices, seminar rooms and the library. There are some awkward moments — for instance, budget compromises led to the installation of heavy, opaque fire doors, which make the ground-floor circulation confusing for visitors. But on the whole, these spaces work as well for architects as they did for seminarians.

The new wing provides a radical counterpoint. ‘We have essentially built a warehouse,’ Tehrani says, ‘that lends itself to all the long-span spaces that the school requires.’ Up top is the graduate studio, a cathedral volume that brings together the workspaces of an entire class. Its roof here is a bravura piece of engineering: cantilevered trusses span the column-free, 34m-long space. The folded surfaces above direct rainwater to just two drainage points, one at each end, while framing small windows to the north and south. Light bounces in from those windows through curved masses of plasterboard, an ordinary material that has been sculpted through painstaking application of tape and plaster. Underneath this, in a double-height space below ground, is the Fabrication Lab. Here, an array of digital tools including a three-axis CNC router allows students to produce models and components in wood and metals. These have included desks and shelving for the building itself: students have been hired to produce these, to NADAAA’s designs, out of birch plywood. Inside the building, curved masses of plasterboard have been sculpted to allow light to penetrate. Image credit: Nic Lehoux????

Sommer claims the school is rapidly becoming known as a hub for fabrication, a specialty of several faculty members. As we walked through the space on a summer day, every piece of equipment was actively in use. And the subterranean space was flooded with sunlight, coming in from the north, where the lab connects to a sunken exterior courtyard lined with native grasses. Landscaping has been designed by Toronto-based Public Work to overcome the ‘island effect’ of the site and connect it to the local area. Image credit: Nic Lehoux??????

These spaces are quite radically open, and embody a cultural change that Sommer has sought to inculcate in the students, favouring collaboration and interdisciplinarity. Some students have pushed back as they settle in here, complaining of a lack of privacy and dedicated workspaces. Sommer argues that the large studio space is in the open tradition of Mies van Der Rohe’s Crown Hall at the Illinois Institute of Technology — albeit with geometric and spatial flourishes that are distinctly un-Miesian. For privacy and for geometric regularity, there is always the old building, where Sommer and the architects have aimed to retain certain extra folds of space, such as the cavernous old corridors, for study and work. There is still not enough of such space, especially since the school has increased its student population just as the new building was completed. This is yet another lesson for attentive students.

Restoration of the seminary building has retained many original elements, with additions such as blackened steel archways. Image credit: John Horner?????

‘We’ve done a formal space-planning exercise, of the kind the university requires,’ Sommer says. ‘But we also recognise that specific needs and programmes aren’t always predictable, and they’re going to change over time.’ Indeed, such changes began even before construction was complete. ‘We think of the building as a scaffold,’ Sommer says, ‘and the faculty is constantly under construction.’ The ground under the Principal Hall was excavated, for structural repairs on the older building, but it became clear to Sommer and Tehrani that the underground volume could easily become an occupiable space, at minimal cost. And so a new space was added to the programme: a gallery for architecture and design. The space is approximately 1000 sq m, largely column-free. A ramped arcade defines the edges of the room, providing accessibility and also a zone for smaller displays. As Sommer showed me the gallery, which will have its inauguration in October, a student-led crew was constructing fixtures for it. ‘It will be the largest space devoted to architecture and design in the city,’ Sommer says, and a key piece of the school’s strategy to engage with a broader public in this fast-growing region of six million people.

Given the sense of contingency about the programme, NADAAA and ERA Architects used an extremely light touch in renovating the seminary building. Most of the interior walls, and lancet-arched doorways, were retained; indeed much of the original plaster and the wood flooring are still there, cleaned up. And the triple-wythe brick of the exterior walls is as it was, in some places exposed to view. The spaces here are, accordingly, much less insulated and airtight than those in the new building, and the two halves operate on separate mechanical systems. Given that the local temperature ranges between -30C and 30C each year, this provides some stark lessons for students and faculty about building performance. This is a subject of research for faculty members, who include building-envelope specialists and a strong department of landscape architects. Upstairs from the main studio, Sommer opened a door on to the roof, which is the territory of the Green Roof Innovation Testing Laboratory — a research programme run by landscape architect Liat Margolis that examines how different systems and species of plantings and photovoltaics affect building performance. Here, an array of beds holds different mixes of sedums, as sensors monitor the plants and the roof surface below them. A wide staircase leads from the Principal Hall up to the open-plan graduate studio and encourages collaboration. Image credit: Nic Lehoux

As Sommer and I crossed the roof, the building revealed itself as a jagged terrain of slate and black aluminum, the turrets of the seminary building running up against the vertiginous slopes of the new wing. Around us unfolded the verdant city: to the east the university’s campus, a mixture of Victorian, Edwardian and modern structures, and to the west an 1880s neighbourhood of gabled houses, with a 1962 school. From up here, the Daniels building’s mixture of styles, technologies and spaces, however inward and complex, seemed to capture the spirit of this place well. At roof level, the new wing’s jagged terrain of slate and black aluminium is juxtaposed with the seminary’s turrets. Image credit: Nic Lehoux

That is a real accomplishment, particularly for a structure that is highly personal and idiosyncratic in its design language. The new portions of the school echo other NADAAA projects, particularly its Melbourne School of Design (2014), in the use of strong geometries, almost but not quite parametric; and in the material vocabulary, which includes metallic mesh, accents of vivid construction-site yellow and great swaths of plywood. But the very particularity of the building makes it a beautiful and distinctive place. It is architecture that aims to say something bold and complex, and in so doing adds to the conversation that is the city.