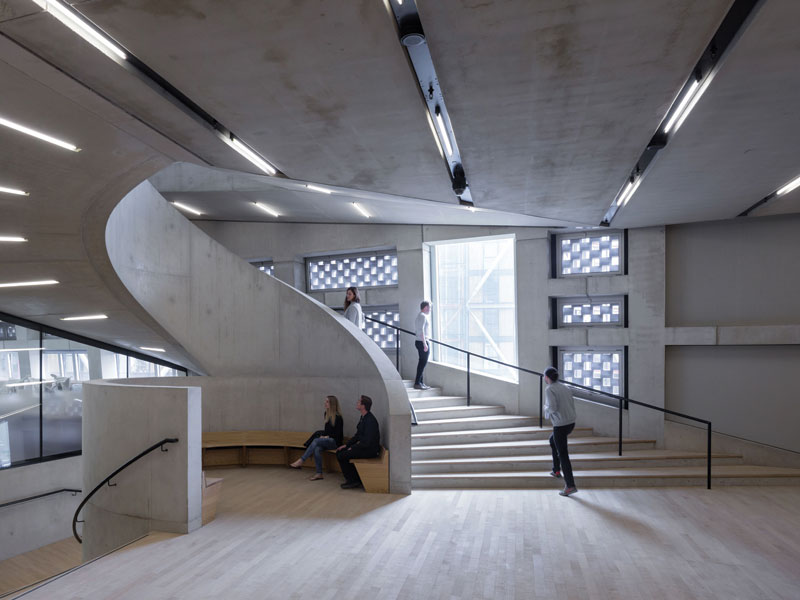 Pamela Buxton reviews new extensions, redesigns and renovations to some of the country’s leading museums and galleries

Already the world’s most popular modern art gallery, Tate Modern now has even more going for it courtesy of its dramatic new 10-storey extension, the Switch House.

Designed by the gallery’s original architecture firm Herzog & de Meuron, the 21,000 sq m extension is proving a public attraction in its own right irrespective of its art content, thanks in no small part to the top-floor viewing platform that offers fantastic views over the Thames.

The Switch House is a significant expansion, increasing the size of Tate Modern by 60 per cent. Built adjacent to the power station-turned-gallery, it is linked at basement and ground-floor levels and rises up in a distinctive, brick-clad, twisted pyramidal form. Outside, two new public squares have been created by Vogt Landscape Architects.

One of the best things about the design of Tate Modern – both original and extension – is its unfussy, stripped-back nature. This is particularly the case at the base of the Switch House, which utilises subterranean, 30m-wide concrete tanks as display space for live art.

With their raw, industrial quality, these strongly remind me in character of the rough-and-ready Palais de Tokyo in Paris, another gallery dedicated to modern art. It’s certainly a place for the concrete-lover – concrete walls, floors and sweeping basement staircase are all left exposed to create a neutral backdrop to both displays and the hoards of visitors.

Further up, the palette is softened with the addition of wooden flooring and curved bench seating as well as furniture by Jasper Morrison. galleries are lofty and top-lit. Level 4 links into the new galleries to the original Tate Modern via a new bridge across the Turbine Hall.

According to Herzog & de Meuron senior partner Ascan Mergenthaler, the architect aimed to create a space that allows for ‘flexibility, improvisation, adaptation and change. We conceived the new Switch House as a lively civic space, including internal streets and plazas framed by a concrete skeleton and enveloped with a brick veil, knitting it back together with the Boiler House to complete and form the new Tate Modern’.

A new retail space on the ground floor designed by UXUS takes a ‘permanently temporary’ approach with the emphasis on flexibility for easy reconfiguration of display units.

The aim is to create a space that is part-shopping destination, part-cultural hangout.

At the very top viewing level of Switch House, brick is the dominant material, with the latticed brick walls softly filtering the light as visitors step out on to the viewing terrace. While it’s a great experience for them, the distress of the gallery’s neighbours in the (very) nearby luxury housing has been well documented in the media.

The Switch House isn’t the only Tate expansion project. Down at the Tate St Ives in Cornwall, we can look forward to Jamie Fobert Architects’ extension, now underway and with work expected to complete in spring next year.

Michael Eavis’s wellies, complete with Glastonbury mud, and memorabilia from Emmerdale and The Archers’ are just some of the unexpected items on display at the redesigned Museum of English Rural Life, reopened in Reading after a two-year closure and a £3.3m overhaul.

Anyone expecting just a shed full of tractors will be pleasantly surprised.

While there are (rightly) still plenty of farm vehicles, this is a hugely enjoyable reinterpretation that breathes life and context into what could have been a dry and rather niche-interest experience. Instead, the museum is aimed to appeal as much to a young and urbanite audience as it is to agricultural experts.

This reinvigoration is down to a fruitful collaboration between the design team – exhibition designer GuM with architecture firm Pringle Richards Sharratt – and the museum, founded by the University of Reading in 1951 to document fast-disappearing rural life. According to director Kate Arnold-Forster, the designers encouraged the museum to be ambitious, expanding its premises and devising a completely new interpretation for its rich collection of artefacts, which range from an extensive photographic archive through to tools and wagons to a huge wall hanging by artist Michael O’Connell, County of Kent, made for the Festival of Britain and hung in public for the first time in more than 60 years. One of the design team’s major moves was to break up the huge space into a series of eight ground floor galleries alongside a 65m-long dedicated ‘wagon walk’ of 24 wagons and carts, which would otherwise have dominated the whole museum.

A new mezzanine provides two further galleries, including one for the museum’s extensive plough collection and space for its reserve collection. Each space was then used to tell a particular story of rural life, presented in a chronothematic approach using a variety of scales of objects, historic photographs and screen interactives, and with an emphasis on the human experience within each themes. GuM designated objects for its contribution to the visitor experience, such as ‘marker’ objects to help orientate the visitor, ‘threshold’ objects to invite visitors into a rural narrative, and ‘icons’.

‘Now there’s a visitor journey,’ says Penny Richards, of Pringle Richards Sharratt Architects. ‘Before it was one large open-plan space. We split up the space so that we could contain stories in different themes.’

It’s a very successful approach, bringing to life themes such as A Year on the Farm, focusing on the different seasons, Town and Country, and Forces for Change, with a look at the technology of food production. This way the new displays encompass social and economic history, technological advancements, crafts and rural culture, touching on evacuees and Land Girls, hunting, walking for leisure, the Romany way of life and eco-protesters along the way. ‘All the old favourites are here, but all positioned in a very different way and telling different stories. People will feel that they’re looking at a new collection,’ says Richards. GuM created a display plinth capable of taking the often heavy load of the objects and freshened up the presentation by introducing patches of bright colour to off-set the exhibits.

Galleries are combined with improved visitor welcome facilities such as an expanded shop and cafe, enlarged education studio and a new social learning space. Funding for the redevelopment included a £1.8m grant from the Heritage Lottery Fund

Atmospheric and jam-packed with architectural artefacts, the Soane Museum has long-been a favourite destination for anyone seeking an alternative to the slick, over-interpreted experience of some of the capital’s larger museums.

Now it’s even better, following the completion of its £7m Opening Up the Soane (OUtS), a five-year renovation programme of authentic restoration which has brought the 19th-century property back to how it was in the days of its founder, the architect and collector Sir John Soane. Carried out by historic buildings specialist Julian Harrup Architects, the project has provided better circulation around the famously labyrinthine house adjoining Lincoln’s Inn Fields buildings as well as opening up previously unseen spaces such as the regency Kitchens. Other spaces restored include the lobby to the Breakfast room and the Apollo recess. The new Foyle Space has been created for contemporary responses to the house and its contents. Earlier phases renovated 12 Lincoln’s Inn Fields and recreated Soane’s private apartments at 13.

The OUTS project has involved extensive research into the museum buildings’ history, with paint analysis used to inform the decoration of the Kitchens’ several spaces returned to their original form. The work has enabled an extra 10 per cent of the museum’s collections to be restored and displayed. These careful interventions have not destroyed the special charm of the museum, which remains reassuringly crammed full of objects, especially in the spectacular catacombs with their collection of urns and vases. But repeat visitors will appreciate the easier circulation, and the additional spaces now opened up for viewing.

As well as the latest renovations to the Lincoln’s Inn Fields’ museum, Soane devotees will soon be able to once again enjoy his grade I listed country house Pitzhanger Manor in Ealing, which is being restored and is due to reopen in spring 2018.

Designed for artist Damien Hirst, this new gallery scooped the 2016 Stirling Prize for best building of the year.

Visiting the gallery, it’s not hard to see why it won. Exhibitions of work by Jeff Koons and Gavin Turk might not be to everyone’s taste, but there’s no doubting the elegance of the gallery design, in particular the staircases, which alone are worth a visit. The gallery is beautifully designed by Caruso St John, architects of the recent refurbishment of the Tate Britain. The project is a part reworking of a grade II listed Edwardian former theatre carpentry and scenery painting workshop, and a part new-build, with extensions at either end to form a terrace running alongside the railway tracks at Vauxhall. A huge Led screen on the facade signals the gallery’s exhibitions to passing train passengers. As well as joining the building internally, a new upper floor has been added to create galleries on two levels as well as a restaurant, shop and administrative space. Lit by clerestory windows, the lower galleries rise 8m while the upper galleries are roof-lit and vary from 4.5m-7m high. All the galleries are designed to be calm and neutral, with a concrete floor and white walls and unobtrusive incorporation of servicing. According to Hirst, the gallery has realised his ambition to create ‘an unobtrusive and beautiful series of buildings that work perfectly as a space to exhibit great art’.

As well as providing an impressive and new free art venue, the gallery’s presence is likely to further regeneration in the surrounding area.