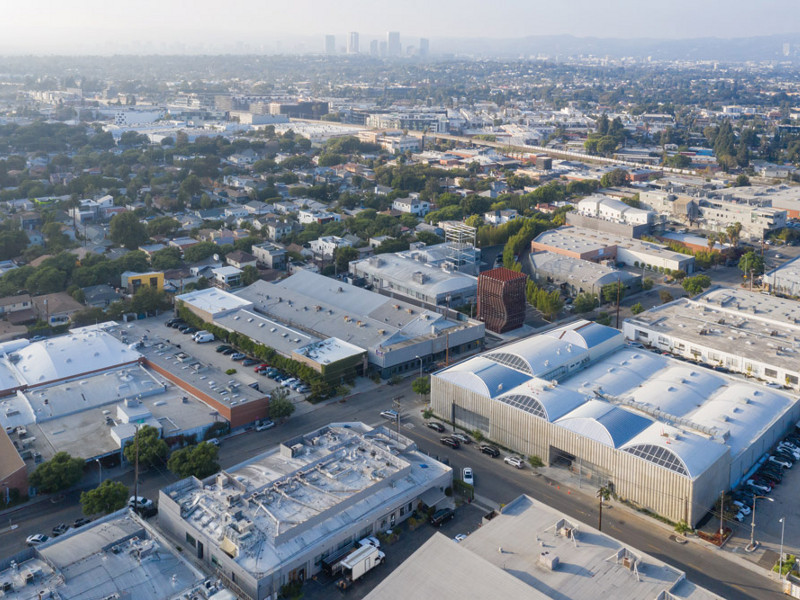 Heading along the unassuming Hayden Avenue in Culver City, you are greeted by an unusual warehouse. Bathed in late-afternoon California sun, its pillowed concrete facade looks golden as green light pours out through the indoor acacia trees beyond the metal grates. It’s a dramatic introduction to a quietly hardworking building: UCLA’s new Margo Leavin Graduate Arts Studio, designed by Johnston Marklee.

Located in the heart of the Hayden Tract — a former industrial zone targeted by redevelopment in the Eighties — the project stands out from the pastel bungalows and windowless warehouses that dominate the neighbourhood. The Arts Studio’s concrete facade achieves a lot with a modest proposition. Built on a tight budget of $23.1m (£17.6m), the Johnston Marklee team — helmed by principals and founding partners Sharon Johnston and Mark Lee — worked hard to bring architectural detail to the 4,460 sq m project, an adaptive reuse and expansion of a 1930s wallpaper factory. But, says Sharon Johnston, ‘there weren’t a lot of opportunities’ for such detailing. Pointing out the facade scalloping, she comments: ‘This not only helped the wall be thicker, but we loved that it created a kind of animated facade just simply through how light fell across it throughout the day.’ According to Johnston, the brief from UCLA was quite vague beyond the direction to ‘restore and expand’ the original 1,970sq m factory that the art graduate students had occupied since the mid-1980s. Though the directions appear simple, the building had metastasised in the decades since the artists moved in. ‘There were a number of other smaller buildings that were barnacles on to that warehouse,’ says Johnston. ‘Over time — as equipment needs changed and evolved — they would bring things in, add little sheds out in the parking lot… it’s a very bohemian set-up.’

Starting with a feasibility assessment in 2001, it was clear that the outbuildings needed to go. With the need for cost-saving and sustainable building practices, Johnston Marklee had to get creative about how to expand the floorspace. The solution was an L-shaped, site-cast, tilt-up concrete addition that surrounds the old factory on two sides, topped by a grid of vaults lined with curved beams and covered in either roofing membrane or curved polycarbonate. The architects were drawn to the tilt-up method not just for practicality, but because of the ‘historic legacy of this industrial precinct and others around Southern California where tilt-up is such a predominant building system’, explains Johnston. ‘It did have a lot of benefits for us in terms of sustainable practices, as well.’ The build was not without challenges though. ‘To do tilt-up, you typically need a lot of space,’ explains Johnston. ‘You use the ground plane as a casting surface then you lift it up, so logistically it was pretty tough. We weren’t able to reuse as many forms as we wanted to, but we found the system for the form liner — the pillows — and that was the system that we could just replicate.’

The result is certainly successful, with the scalloped form of the outer concrete acquiring a soft geometry that immediately sets the studio apart from its neighbours. The facade is then broken up by sharp cutouts that form the main entrance though a landscaped atrium, as well as side doors and a loading bay. These access points are gated by perforated metal doors which allow warm light to seep out to the street and become bright focal points in the concrete sheathing. The renovation and expansion was instigated by a $20m gift from UCLA Arts alumna Margo Leavin, an influential LA gallerist, whose philanthropy supported the project with the explicit aim of seeding future generations of artists through the new facility.

It can be a fine balance to strike: a building that needs to nurture and inspire the often explosive talent it houses, but is simultaneously a neutral background in which the art created there can speak for itself. ‘It’s a pretty raw building,’ says Johnston, adding that protecting the intangible ‘feel’ of the original building was also important. The work was not about ‘erasing that past — not over-celebrating it either, but just acknowledging the evolution of the building landscape’, she says. The concrete facade of the extension — known as the ‘yards’ — takes on a soft, scalloped form. Image credit: Iwan Baan

Johnston Marklee undertook an extensive consultation with the students and faculty, as well as Leavin herself. Though the building is a teaching facility as well as hosting studio space for the art graduate students, the architects were adamant that it should not have the feel of a typical academic building, full of corridors and sectioned-off classrooms. ‘Flexibility was a really big part of their idea of the identity of the school,’ Johnston explains. ‘They wanted to have ad hoc informality about that layout.’ Columns are absorbed into the walls of the yards, giving the studios a palatial spaciousness. Image credit: Iwan Baan.

A key intervention to the original building was removing most of the internal divisions. Originally on multiple floors, Johnston made the decision to strip the inside out to a shell and create a new, more workable space on a single floor. In order to retain the sense of community that can be lost when a much-used old building is renovated, the architects decided to leave ceilings off the studios, circulation zones and labs, giving the new internal structure a rabbit warrenlike quality. It certainly feels intimate, without being claustrophobic. ‘There are no ceilings on the individual studios,’ Johnston explains. ‘We tried to strike that balance between privacy — a dignified space to make work and show your work and your studio — and always having a sense of this collective atmosphere of your colleagues.’ ‘There was a lot of distinction between working/meeting spaces and circulation spaces, originally,’ says Johnston. ‘We were able to blur that. The students have told us since the building was finished [in late 2019], that their studio is much better quality, but also that they really have a sense of community about the collective space.’ This is where Johnston Marklee’s vision really shines: the boundaries between the old factory and the modern addition are blurred, and the building flows seamlessly between spaces and uses, permitting users to become lost in the energy and creativity of making art.

Additionally, the drywall does not extend all the way to the top of the wooden structures that make the studio, leaving the beams exposed. That extra bit of wall left raw acknowledges in a very practical way where the studs are — vital for hanging art pieces — but it also suggests a building that is constantly in flux. ‘That it is ‘work-in-progress’ means you could easily see the systems that support the building,’ says Johnston, ‘and that they would fall into the background a little bit more when strong artwork is exhibited.’ Ceilings are left off studios and corridors in the original building to create a more unified, flexible space. Image credit: Iwan Baan

The materiality of the finish adds to the rough-and-ready feel of the interior. In order to bring the original factory building and the new extension together, the architects preserved the existing bowstring truss structures in the main work area, absorbing the columns into the walls between studios. The new ‘yards’ — as the L-shaped addition is known — house three vast equipment labs with tools for woodwork, industrial kilns for ceramics, as well a sculpture yard, and the main atrium entrance. These are altogether larger-scale spaces than those inside the former factory, and though the architects opted to emulate the wooden structures of the studios, they did not want to also have columns. The studios are designed to nurture and inspire talent as well as provide a neutral background for the art created there. Image credit: Iwan Baan

The solution was to add a series of glulam beams that echo the historic structure, but use contemporary engineering systems to span the vast ceilings without columns. Preserving the original bowstring trusses was also imperative in keeping the costs of the build down, and scored Johnston Marklee points towards the building’s Gold LEED Certification. The result is that the new yards and the atrium have a palatial feel to them, despite their bare concrete walls. The new beams are more sleek and elegant than their older counterparts, but they speak the same language.

These sustainable building practices were not just happy coincidences — the entire project was designed with sustainability and longevity in mind. The new cast-concrete walls are 25cm thick. Concrete tilt-up walls eliminate the need for waterproofing membranes and insulation. The lightweight roof, meanwhile, diffuses the LA sunlight with polycarbonate panels, creating shaded and unconditioned work zones. The total occupiable area of the site increases by half, and swathes of the new building are passively cooled. It’s a breathing and breathable building. With its facade of concrete ‘pillows’, as Johnston calls them, the building stands out from its neighbours. Image credit: Iwan Baan

It’s in these details that Johnston Marklee’s ingenuity and sensibility becomes apparent. The new cast-concrete addition is naturally ventilated and inherently adaptive to future change by fusing together new and old structures to allow differentiated use to unfold freely, while stitching the new complex into the surrounding fabric.

‘We love spaces that are generous and welcoming, meaning that they don’t predetermine how you have to use them, how you organise furniture, how you might hang art, how you might host a gathering,’ says Johnston. ‘And so by having the strong definition of the roof plane with the vaults covering the yards, we think that both the volume and the architecture of the structure of those rooms allows for much more chaos and ‘ad hocness’ on the ground plane. But, you still perceive order to the building architecture. It’s really more of a factory than it is a finished academic environment.’