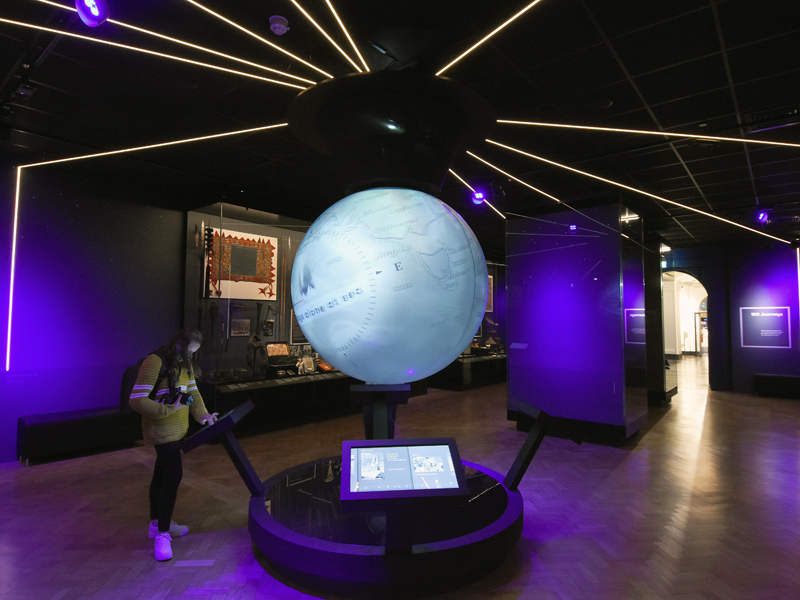 Head of heritage, art and film at The Box, Nicola Moyle explains how the Plymouth-based project got off the ground

What was your role in relation to the commissioning of the architects and designers of The Box?

I’m both client for the project from the contractor’s point of view and I’m the content lead on the client side for what’s going into The Box. As such, I’ve been responsible for appointing the design and architecture team. This is a Plymouth City Council-led project, and I’ve worked with David Draffan, who has been the senior responsible officer, the chief executive Paul Brooks, and also the late Gareth Simmons, who was the programme manager.

Did you have previous experience as a design client?

Yes, but on a significantly smaller project: the refurbishment of the old museum and gallery, its first overhaul in 30 years.

What was the overall vision for The Box?

The project’s initial starting point was the problem of finding a suitable building to house the Plymouth and West Devon Record Office archives. If we didn’t find suitable facilities, the National Archives were going to take the collections off us. We decided on a site in and around the museum, and out of that arose a fresh proposal for The Box. Fundamentally, the project is a 21st-century transformation of the museum and art gallery to create a new, collection based cultural institution. We’re using these collections to tell the story of Plymouth, its impact on the South-West of England, and its role in the wider world. The content will include the collections of the art gallery, library, the South West Film and Television Archive, and various naval collections located within the city, including a large collection of figureheads.

Our preferred option was the site of the museum and art gallery and the old central library, a [typical for the age] piece of 1908 civic architecture, and the space between the library and the nearby St Luke’s Church. We decided to redevelop a 1950s extension to the library and create a new archival store on top of the new building. In 2013, we successfully applied for a £15m Lottery Heritage grant. What research did you undertake in preparation for the brief?

We did an enormous amount of research to get a sense of what works well and what doesn’t. The project team went to Liverpool to see the Museum of Liverpool and the Slavery Museum, and to Manchester to see the archives, the library and the Whitworth gallery. We also saw the Hepworth Wakefield art museum. We were really interested in the quality of the materials and fittings so that we could shape what we would be requiring in the specification. When David [Draffan] was in the States, he went to the Smithsonian museums and we also visited some museums in Berlin.

How did you go about commissioning the design team for the building?

We appointed the architect, Atkins, by an OJEU (Official Journal of the European Union) process. The reason they won was the vision of their lead architect Ben Aston, who they had brought in as part of their tender. He didn’t change the essential idea of having an archive box on the top of the extension but gave us a very clean, simple design that had a confidence and gravitas while not overpowering the original building. For the exhibition design, we invited 30-40 companies to come down to the site and find out about the project. Twenty-five came down and 12-15 put in tenders. We invited five to interview and come up with a creative response to our Mayflower exhibit. Event Communications was the universal choice – they blew us away with their presentation and their pitch, and their eagerness to engage with the audiences for The Box. We appointed The Hub as specialist contractors after interviewing five companies. Their passion for the project shone through. In total the project cost £45m

What was the creative collaboration with the design team been like?

Overall, it was exciting. The process was one of discovery regarding the scale of the gallery content. We had to do a lot of learning because the project – at £45m – is so big. Working with Event on the eight permanent galleries has been a really creative process. They’re a very professional and experienced group of people who really knew what they were doing.

What look and feel were you after?

The Edwardian architecture was a symbol of the confidence of the city and had a real presence in the urban realm. We’re bringing back that confidence and giving the building back its stature so that it can hold its own in the city again. But we’re not doing it in a way that disrespects the old. Instead, the design vision is all about honouring the old with the new – it’s very clear where the two meet. The Box gives the building back its mojo. It looks confident and gives the people of Plymouth something to be proud of. Architectural firm Atkins was responsible for the ‘clean, simple’ design

Did the construction present any particular challenges?

A lot of work went into sorting out the raft of Victorian pipework as we made good the public realm. We also uncovered unknown asbestos when we cleared the site. And, until we did the piling, we didn’t realise the extent to which the library had been built on waste material from the Blitz.

What are the key design features of The Box?

Literally the elevated Box itself, which is what started off the project in the first place. It’s an enormous concrete box housing the archive collections in three miles of racking. We put it up high on the first floor and it just looks extraordinary. Underneath is a 10m-high lobby with 14 figureheads suspended from the base of the box. What do you feel works particularly well?

We’ve had the designs for a long time, but when you see the figureheads and also the giant suspended sphere that’s installed in the 100 Journeys gallery, you realise that the reality is so much more powerful than the design. Nothing can compare to seeing them actually there.

What were the most challenging and rewarding parts of working as a design client on this project?

The biggest challenge was the treadmill of deadlines that have been relentless – it’s been very difficult to create the good quality, focused time needed to ensure that the feedback on the design is as good as it can be during the design and construction process. Seeing the visualisations come to life – as I went round the site as it came to fruition before my eyes after nearly six years – has been massively rewarding.