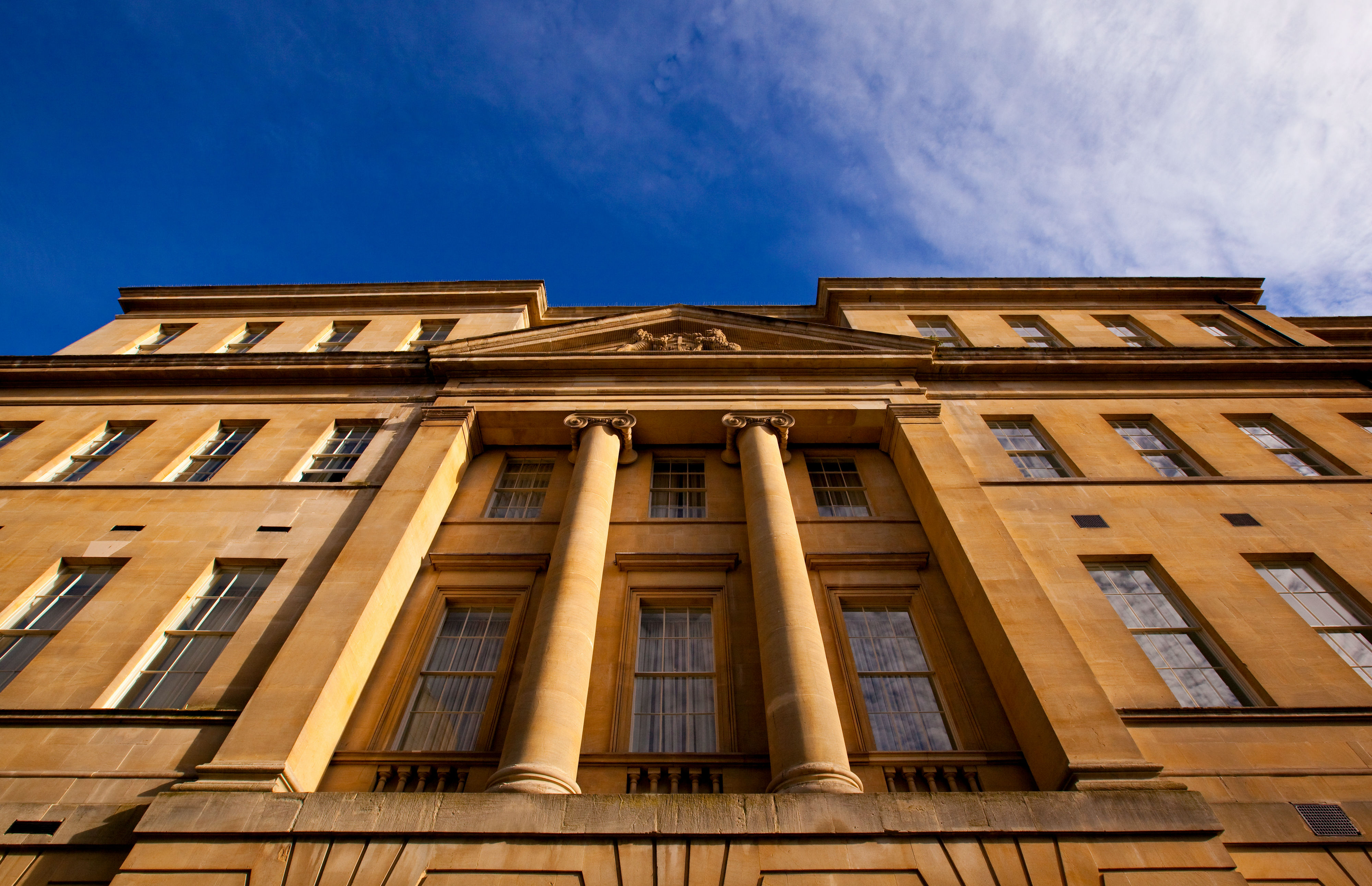 We speak to luxury interior design studio, Champalimaud Design, about their first project in the UK – the 5-star Gainsborough Bath Spa hotel.

Originally built as a hospital in the early 1800s and named after the artist Sir Thomas Gainsborough, the Gainsborough Bath Spa is a spectacular, 5-star hotel in the heart of historic Bath. Owned and operated by YTL Hotels, the hotel is a Leading Hotel of the World and was the first hotel in the UK to be designed by New York-based interior design studio, Champalimaud Design.

YTL Hotels have a strong relationship with Champalimaud, which began when the studio designed its hotel The Green Leaf, in Nisekko Village, Japan. “It’s been a fruitful partnership since,” explains Champalimaud. “[YTL Hotels] are wonderful creative and business partners.  Since the Gainsborough we’ve collaborated with them on the recently opened Academy Hotel in London, and the soon to open Monkey Island Inn in Bray-on-Thames.”

For the Gainsborough Bath Spa, YTL commissioned Champalimaud to create an elegant hotel that emphasised art and design as well as its service and wellness options. The result is a hotel that remains contemporary while also being full of heritage and history. The Gainsborough’s hotel manager, Brian Benson, explains that Champalimaud was involved right from the beginning of the build – when the honey-colour façade was merely a shell.

“The build itself was very challenging,” he says. “The building is Grade II listed – it’s a collection of 5 buildings that have been joined together. We found one of the largest hordes of Roman coins in Europe underneath the spa, and a lovely 4th century mosaic. As you can imagine it significantly slowed up the development. The site needed to be inspected, everything catalogued and cleared, before work could continue. We weren’t allowed to dig anymore, in case there was anything else in the site that could be damaged. Designs for the spa had to be redone… but it’s added another layer of heritage for the building.”

Champalimaud notes that this was one of the team’s biggest challenges – and highlights – while designing The Gainsborough. “Our biggest ‘challenge’ was actually a great learning opportunity, and ultimately a highlight for this particular project,” they mention. “It can be a little tricky working with historic buildings in the UK; Britain is wonderfully protective of their listed spaces – so much so that there’s a laundry list of things that we cannot do to them.”

“We had to be really patient with the construction phase of the project,” Champalimaud continues. “The ancient artefacts found while they were breaking ground were an unexpected surprise! The whole process made us very mindful of maintaining the building’s original integrity with every design decision we made.”

In fact, one of the biggest themes that runs through the Gainsborough Bath Spa is the building’s heritage. “In the spa, the aromatherapy bar is our nod to the British apothecary tradition from the middle ages,” Benson mentions. “This moves forward to the Georgian era with the Georgian hot chocolate in the spa, the Georgian chamber music, and Italian sedan chair [in the lobby].”

“You’ve got all these little touch points,” he says, mentioning that the building started life as a Georgian-era hospital. “It all comes through to the modern day; most recently during the Second World War the admiralty had the building. Then the art technical college took it back again, so before we opened we ran an art competition [for students] to design some pieces for the hotel.” Students’ art is now on display in the bar, the restaurant, the reception of the spa, and several other locations throughout the Gainsborough.

Champalimaud also took inspiration from the hotel’s history to create the interiors. “As a firm, we believe that it’s important to keep the essence of the original building alive,” they comment. “Our design direction was focused on enhancing what already existed and letting the building (and its treasured history) drive the narrative. Not only are there Georgian references throughout but there are also subtle nods to the building’s Roman origins – especially in the trims. In the end, the hotel became exactly what we’d hoped it would be – comfortable, yet rich and layered.”

“The location and the building’s history is where the design narrative came alive,” Champalimaud continues. “Bath is a treasure, a world UNESCO World Heritage Site, and one of the most amazing places in the UK. The hotel’s building is remarkably original with its Georgian and Victorian facades and has a good bones. The building itself looks grand, but it’s actually quite cosy. There’s an intimacy there that’s unmatched by other hotels in the area.”

Upon entering the Gainsborough Bath Spa’s bright, marble clad lobby, the eyes are naturally drawn to the hotel’s sweeping staircase and the bespoke chandelier that dangles from five floors above, all the way down to the ground floor. There are a total of 99 rooms in the hotel, 11 of these being suites; most of the rooms have been dictated by the historic building’s angles, as Benson elaborates.

“One of the challenges about being Grade II listed was that we wanted to move a lot of the walls, but you’re very limited to what you can do,” he says. “It proved challenging, but we tried to strike a balance between comfort and practicality. A lot of the rooms were [previously] wards, nurses’ offices, and individual hospital rooms.” The bright, open space that previously acted as the hotel’s chapel has been delicately restored (its sandstone walls were painted black when the building was part of the art school) and is now an event space with an outdoor terrace.

Meanwhile, three of the 11 suites are feature suites. “We have our Gainsborough suite on the top floor with panoramic views of the city,” Benson says, describing the rooms in greater detail. “The two bedroom suite, which is split over two floors; and our Bath Spa suite, which has its own supply of thermal water piped into the room. [There, guests] can have [their] own private bathing experience.”

Interestingly, because of the thermal waters that are pumped into the spa – and the Bath Spa suite – Benson reveals that “there’s almost as much plant machinery and floors below, to handle the water treatment”, as there is building above ground. “We’re lucky that our pools – unlike a regular swimming pool – is filled and emptied all day and all night, 24/7, 365 days of the year,” he continues. “The water never gets dirty in the same way a regular pool does. It’s a very interesting process, but very technical.”

In the guest rooms, Champalimaud have used a sophisticated colour palette of refined greys, warm neutrals and splashes of ‘Gainsborough’ blue. In true Georgian fashion, the ceilings in rooms on the lower floors are exceedingly high – the tall windows let in an abundance of natural light in the day, and are draped with heavy curtains that block out street light at night.

The neo-Georgian look continues throughout each of the guest rooms; black period style furniture adorns the spaces, wardrobes are made with in-laid burl wood, and the beds’ headboards ae finished with delicate antimacassars that show off a traditional British pastoral scene. The bathrooms feature warm marble, fixtures from luxury bathroom manufacturer VitrA, and underfloor heading.

Guests with disabilities or mobility issues are also able to enjoy the full Gainsborough Bath Spa experience – the hotel has a collection of fully adapted rooms, and all public areas (including the spa) are wheelchair accessible. Champalimaud has left nothing to chance with their first foray into designing in the UK, saying that, “It’s the details that make or break any design project. It’s essential that everything is considered; from the trim to the accessories to how a bed is made – it all matters and it all shapes one’s experience in a space”.

“Alexandra [Champalimaud] was very specific, even down to the placement of the chairs, exactly how the cushions should be plumped,” agrees Benson. But, he says, the Gainsborough would have it no differently. “If you come up with a plan that works, and it’s as close to perfect as you were able to plan, then it should never be changed unless you sit down and discuss that there needs to be an improvement.” He shrugs. “[So far], we haven’t come across anything.”

“The interesting thing is, if you go to one of our hotels, they’re all different in themselves - but if you look, there is a kind of common theme or feel. I like to think of it as a 21st century Great Gatsby,” continues Benson. In the Gainsborough, he says, this comes across with “elements of Art Deco, [married with] nods to the British pastoral tradition. Some people feel it’s not Georgian enough, but I certainly feel – and the vast majority of our guests feel – that both YTL and Champalimaud have struck the right balance. It’s been a privilege to be a part of the first 5-star hotel in Bath in nearly 30 years.”

Having worked on other YTL projects since the Gainsborough’s opening, Champalimaud mentions that this incredible, unique hotel “furnished our team with some valuable insight into how to create unique design experiences in listed buildings – insight that we’ve used in our other YTL projects.”  With the Gainsborough Bath Spa’s success solidifying their partnership, Champalimaud says that its relationship with YTL “has been nothing short of amazing from the start, and has only gotten stronger with time. We’ve now worked on four projects with them to date, and look forward to what is to come.”