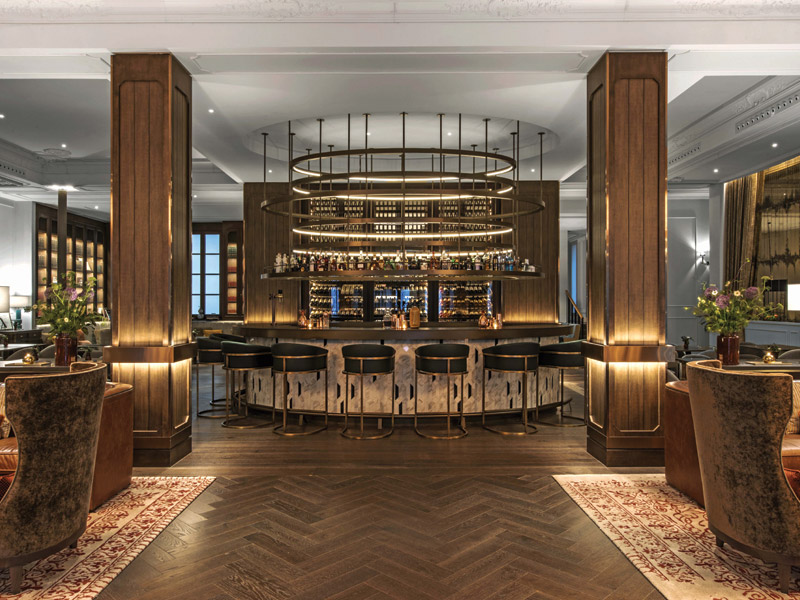 Gran Hotel Inglés has been a landmark since it was built in 1853. Cathy Hayward reports on Rockwell Group’s restoration of Madrid’s oldest hotel to its former splendour

The first hotel to have a restaurant, and on the first street to receive electric lights in Madrid, Gran Hotel Inglés was a cultural icon when it opened in 1853. Members of the European aristocracy frequented the hotel during the hunting season and the restaurant served as an illustrious meeting place in the capital where the best cultural, social, and political events occurred. Celebrated guests included bullfighters such as Salvador Sanchez Povedano (Frascuelo) and Rafael Gomez Ortega (El Gallo). In the Twenties, literary giants such as Virginia Woolf, Clarín, Valle-Inclán and Galdós, and painters Henri Matisse and Rusiñol stayed at the hotel.

During the 1900s, the hotel was configured in a circular layout with two toilets on each floor, which were shared by guests. At the beginning of the 20th century the staff of the hotel lived in the attics of the building. The hotel’s payroll included cabinetmakers, painters, and bricklayers. Adapting with the times, during the Spanish Civil War the hotel served as a hospital, and it changed its name during the Second World War to Hotel Imperio to remain sympathetic to the Axis. But this Grande Dame of European hotels later suffered years of neglect and disrepair and eventually became derelict. The design concept celebrates the hotel’s past as a gathering place for the avante garde and intellectuals, weaving original imagery and salvaged historic items into the design of the public spaces.

But the Madrid Studio of Rockwell Group has brought back the glamour, elegance, and innovation of this celebrated venue, drawing inspiration from its 165-yearold history. The design concept celebrates the hotel’s history as a gathering place for the avant-garde and intellectuals, weaving original imagery and salvaged historic items into the design of the public spaces, gym, spa, meeting rooms, and guest rooms. The hotel is located in the cultural and historical centre of Madrid, within walking distance to the Puerta del Sol and various monuments and tourist attractions. The design team, headed up by Eva Longoria and Elisa Rodriguez, introduced elegance and sophistication to the lobby, celebrating its 7m-high ceilings with circular chandeliers inspired by a classic English manor. Some of the hotel’s original chandeliers and columns are restored and featured. A central lobby bar is surrounded by a cocktail lounge with clusters of area rugs and a range of seating providing gathering spots for hotel guests and visitors.

Mirrors, rich gem-toned upholstery, and metal details nod to the hotel’s heritage. A library with floorto- ceiling bookshelves and a fireplace is a return to the hotel’s intellectual past. The coffee bar/lounge to the west of the bar has mirrors with faded historic images of famous hotel visitors. The library contains floor-to-ceilings bookshelves and a fireplace, referencing the hotel’s intellectual past

The restaurant is inspired by the dining room and open kitchen of a grand British country estate, with a mix of classic structures, such as oak columns painted blue, and a mix of modern and classic lighting. Booth seating is reminiscent of a sophisticated and intimate members’-only club.

Hallways leading to the guest rooms feature small framed photographs and are dedicated to the hotel’s illustrious past guests, from bullfighters and writers to politicians. In the white-painted guest rooms, Rockwell played with the classic geometry of the molding by deconstructing it and extending it across the ceiling. The upholstery of the bed frames is mimicked around the leather and upholstery-clad monolithic TV wall. Luxurious bathrooms have marble standalone baths. Meanwhile guest room wardrobes are lined with wallpaper that features vintage copies of hotel postcards.

Custom valets feature a shelf that holds new postcards for guests, allowing them to continue the tradition and ensuring that Gran Hotel Inglés will remain a cultural icon for years to come.