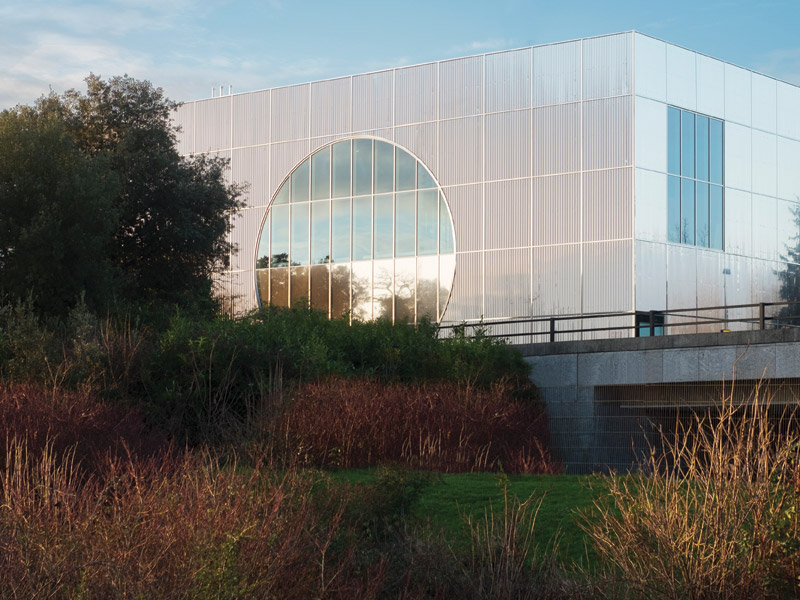 An inspired extension of MK Gallery helps articulate everything that was right about the design and visual culture of Milton Keynes' initial design, says Veronica Simpson

It is always Good to have one's prejudices challenged. Milton Keynes (MK) is not a place that was ever top of my bucket list; however, I couldn’t claim to know much about it, beyond that it has an enormous shopping centre and used to be synonymous with concrete cows. As a 1970s new town of a particularly tricky vintage (built when lots of cheap and nasty ‘modern’ buildings were being thrown up around the UK, which were shoddy travesties of what the original modernists had envisaged) my suspicion was that, at best, it might look like a greener, low-rise version of Croydon. But I was massively mistaken – the reality is a lot classier than that.

The Milton Keynes Development Corporation (MKDC), led by its charismatic architect Derek Walker, was not inspired by the more typical ‘garden cities’ of Ebenezer Howard; instead, it took its lead from Los Angeles and Mies van der Rohe. Its radical plan form (designed on a relaxed, low-rise grid with lashings of greenery) and scale attracted international attention, and architects who worked on it included Norman Foster, Henning Larsen, Ralph Erskine and John Winter. The aforementioned modernist shopping centre, designed by Stuart Mosscrop and Christopher Woodward, is now a Grade II listed building, which the 20th Century Society has declared ‘the most distinguished 20th century retail building in Britain’. Tom Emerson, co-director of 6a Architects, agrees: ‘The shopping centre is essentially Mies van der Rohe meets the (original) Crystal Palace. It’s one of the city’s great public spaces, an incredible building, one of the great mid-century buildings in the UK and not well enough recognised.’ If Emerson has been won over to all things Milton Keynes it’s because he and his 6a co-director and partner Stephanie McDonald have just spent eight years designing, refining and then finishing a delightfully MK-esque extension to the city’s only space for contemporary art: MK Gallery. Opened in 1999 with just one exhibition space, it was clearly something of an afterthought, appended to Milton Keynes’ theatre at the furthermost, park-facing end of Midsummer Boulevard. A couple more rooms were added in the interim, but nothing to really stake a claim on the city’s visual culture.

And now they have more than doubled the space, with a building and exhibition (The Lie of the Land) layered with references to MK’s iconic 20th century design. The extension stretches into what used to be a car park, with two more gallery spaces at ground floor; a quirky, double-height cafe; and a staircase up to a huge auditorium, the Sky Room, with two massive windows: one square and one taking up the top half of the circle that is visible on the outside of the building, which is outlined in polished stainless steel panels. Altogether, this gallery now has 500 sq m of exhibition space, with a large learning and community studio, and a fully accessible changing room, which means that both the gallery and adjacent theatre can accommodate people with complex physical needs. It’s hard to tell where the old building ends and the new one begins throughout the ground floor: the original ceilings are stripped back to heights of up to 8m. Large, industrial feeling spaces continue into the new extension. Ducts and pipes are revealed, celebrating the ‘high-tech’ moment in UK architecture that found a natural home in MK.

The cafe is also a colourful blast of MK DNA: its predominantly yellow colouring was inspired by Norman Foster’s scheme for the MKDC office, which featured so much yellow it was called The Custard Factory. Apparently, one of the complaints about the original MK gallery was the lack of cafe. Well, there can’t be any complaints now.

The Sky Room is also a game-changer. With retractable seating for 150, it offers spectacular vistas out onto the nearby park and can be used for events, film screenings, conferences and concerts.

The 6a team worked with MK-born artist Gareth Jones and play specialist Nils Norman to create a sequence of spaces inside and outside of the building in an immersive installation they have called City Club, after a previously unrealised leisure proposal for MK. This scheme appears in the aforementioned exhibition, as do other items from MK’s design history that have been deployed here, such as one of MK’s iconic curving, perforated benches by MKDC designer Brian Milne, and a colour chart from a 1970s Habitat catalogue (Habitat founder Terence Conran apparently contributed to the MK masterplan and retail concept).

But cafe, colours and iconography aside, can MK Gallery cure the perception of MK as a cultural cold spot? Time will tell. What’s the ultimate test of the strength of its cultural and aesthetic DNA? For example, could Emerson ever imagine living here?

‘I came up really early this morning and stopped for coffee in the shopping centre, in a cafe that has an amazing view of the gallery,’ he replies. ‘I don’t know if there’s something like MK syndrome – an adaptive Stockholm syndrome... I’ve definitely caught the bug of the city.’

But could he live here? ‘I think I could,’ he says.