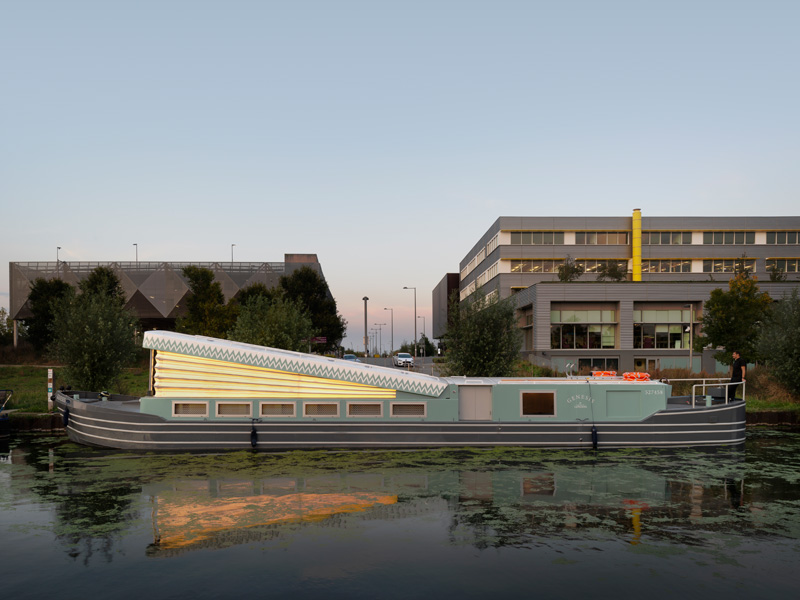 Veronica Simpson visits a cosy, welcoming place of worship floating along the edge of the former Olympic Park in London: an innovative 21st-century space serving multiple faiths and diverse communities

The regenerating margins of the Queen Elizabeth Olympic Park are not a particularly welcoming sight at the best of times. On a wintry afternoon, it takes some determination to confront it at all. Having traversed, with gritted teeth and dripping brolly, the dazzling temples to consumerist excess at Westfield Stratford, and stomped wetly down the bleak and vacant pavements that fringe the surrounding highways not yet animated by anything more interesting than the odd office block, and stacks of hoardings, hiding cranes and diggers, I eventually hit the canal path alongside Hawkins\Brown’s award-winning Here East office shed looking for the neighbourhood’s new floating place of worship; here, I was due to meet its architect, Denizen Works, and its custodian, Reverend Dave Pilkington. I was hoping for warmth, a cup of tea and maybe a biscuit. And I got so much more.

Nestled among the mostly shuttered barges it was impossible to miss the VW-camper-van-esque pop-up canopy on this wide-beamed narrow boat. Its concertinaed sailcloth folds are strung with LED lights, so it glows like a stripy, triangular beacon. The door was wide open, warmth was pumping out from the underfloor heating, and tea and biscuits – double chocolate chip cookies, no less – were immediately offered.

Even without the tea and biscuits, this compact space oozes warmth and character. There’s an uplifting smell of timber, emanating from the Valchromat wooden benches that are arranged in an alcoved formation along the light, plywood walls, interrupted at regular intervals by wooden pillars, and the new flatpack altar, shaped like the prow of a boat.

The grain in its wooden panels forms a V, as do the legs of the stools and the pattern in the metal grilles that line the windows – all inspired by the V of the hand-stitched sailcloth that facilitates this unique, pop-up roof. In this contemporary way this floating church evokes the craftsmanship and care of its more solid, grounded predecessors. The floating church is christened Genesis – appropriately for such an innovative typology – and is a project borne of the Church of England’s desire to serve new communities in the emerging east London neighbourhoods in very different ways than before. The Hackney Wick area has already seen thousands of new houses and apartments built, and this stretch, along the River Lea Navigation, will see many thousands more arrive over the next 25 years. So, in times of great religious, cultural and social diversity, how best should a modern faith space address the differences of a diverse, urban community, and yet find common ground, to bring them together?

Reverend Pilkington has some innovative ideas: ‘I said I’d like to start a church with people who have no faith and see what happens. I am really interested to see how people engage with my faith and take the conversation from there.’ Pilkington has already spent time on this stretch of the canal, on Genesis’s predecessor, a simple barge, which acted as a device for consultation as well as engagement. It was through stakeholder workshops that the function and design of this floating assembly space emerged. Denizen Works won the competition to design a temporary place of worship four years ago (the barge idea, deadpans Denizen Works founder Murray Kerr, ‘blew them out of the water’). But there were several evolutions before it arrived at its current form. It is supremely adaptable, to accommodate supper clubs, yoga or pilates classes, open-mic nights (a high-quality sound system is hidden in its plywood pillars) and, of course, gatherings for meditation and prayer.

Kerr say: ‘The concept from the diocese’s point of view was that this goes to five locations over 25 years. It builds up a congregation in each space and they can either build new or create a space from what’s there already… Rather than rushing to build buildings and then trying to get people to come to them, they are finding their congregation first and then ultimately providing them with the building they need.’ Pilkington, having spent a week on Genesis, is thrilled with his new pastoral base: ‘I’ve always said I’m not bothered about a building. But now that this is here, I love it.’

This is not about replacing the more traditional Anglican church experience or drawing people away from St Mary of Eton, across the canal, whose spire is visible from the boat’s window, says Pilkington, ‘this is about simplicity, care and love’.

For inspiration, Kerr says the VW camper van was a key reference, as were the bellows of a church organ, but I suggest there is something of the compact simplicity of small, medieval, rural churches, in its craftsmanship and simple but effective engineering. Kerr’s associate, Andrew Ingham, took care of most of these details, including commissioning the furniture from a local maker, and working with sailmakers (Jeckells), naval architects (Tucker Designs) and boat builders (Turks Shipyard) to hone the structural and mechanical specifics of its unique roof. Operated via push button, the roof deflates so that the barge can pass under low bridges. When fully raised, the head height of the barge reaches 3.6m. The dramatic circular light at its centre is a nice, James Turrell-esque touch, which funnels sunshine through into the boat’s core, on a bright day. But Ingham is equally pleased with the effects of watery reflections as they filter through the screens. Says Ingham: ‘It was all about using natural materials, with expressive grain to give it character. It’s almost a design object rather than a building.’ As well as gatherings for meditation and prayer the boat can accommodate supper clubs, yoga or pilates classes, and open-mic nights

With its deep reveals and mossy green lino flooring, Genesis feels solid, robust – certainly good for both the reverend’s and the local business and residential community’s purposes; commercial hires will help offset the £650,000 investment. Kerr hopes the space creates something genuinely new. He reflects: ‘Churches used to be designed to make people feel small. This is the opposite: it’s designed to make you feel comfortable. It explores the idea that faith and community buildings can be much more intimate and less frightening on first encounter.’