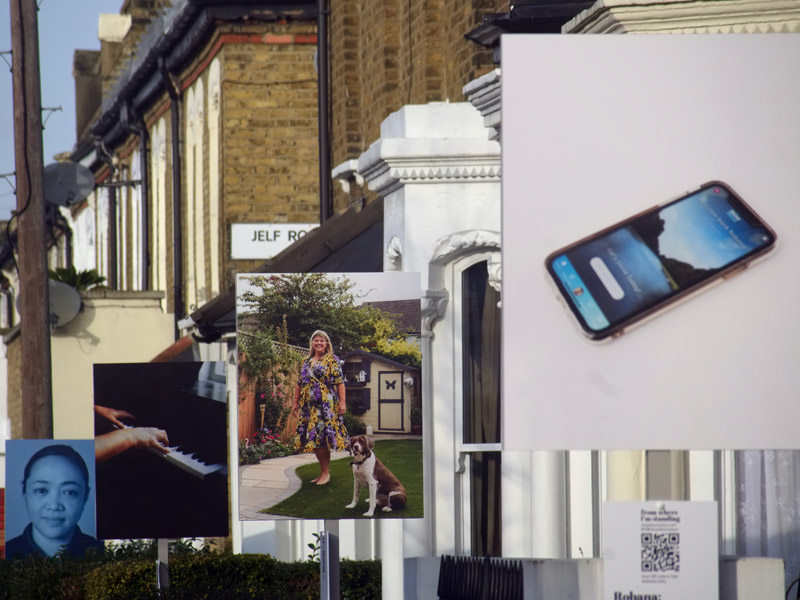 Veronica Simpson finds an antidote to lockdown anxiety in the stories of frontline workers, told via a South London art initiative

Words by Veronica Simpson
All Images by Ed Errington

I am not sure what an emotional spectrometer might look like, but in my imagination, it would register joy in bright orange or sunshine yellows at one extreme, and a palette of anxiety, anger and despair in bruised shades across the other half, with an insipid shade of boredom bang in the middle.

It strikes me that the latter emotional positions have registered more often than ever before for many of us over the past 12 months, and never more so than during this winter, when the daily compensations of nature’s ever changing glories and outdoor life that we all appreciated anew over the summer and autumn were curtailed – not helped by the mainstream news media’s bias towards stories seemingly designed to provoke frustration and fear.

Along with a vaccine for the body, we clearly need an antidote to anxiety for the spirit. At the start of January, I figured I might have stumbled on it, thanks to a wonderful outdoor art installation that appeared in my South London neighbourhood.

From Where I’m Standing is a participatory project conceived and curated by Clare Patey, co-founder (together with philosopher Roman Krznaric) of the Empathy Museum, whose mission is to create immersive experiences that help audiences look at the world through other peoples’ eyes. Having secured vital Arts Council England funding for her idea at the start of lockdown, Patey was able to compile interviews with and photographs of 34 individuals who are either frontline staff in hospitals, social services, public health, GP surgeries, dental clinics and supermarkets, or local people who have made a difference to those around them (as voted for by their community).

The individuals represented on this street installation – Dalberg Road, Brixton – via estate agent-style placards stuck on peoples’ garden gateposts, are drawn from all over the UK, from Harrogate to Truro (with NHS personnel sourced thanks to support from the NHS and the Health Foundation). As with all of Patey’s projects, the resulting work is a collaboration with many different creatives, including a number of photographers (deployed according to location) and recording/sound professionals – all of whose day jobs in broadcasting, publishing or film had been put on hold thanks to the pandemic. The selected individuals were photographed, between lockdowns, along with an item that has meant the most to them. These images are depicted either side of the placard, along with a QR code that activates a 10 minute recorded interview accessed either via your phone or – if you want to hear their stories in the comfort of your home – from a dedicated website. Diving in at random, I heard from Jenny, a Sainsbury’s cashier whose big heart and generous nature clearly make a huge difference to her customers and community. I also tuned in to Kathleen, a nurse from the Philippines currently working in a Devon hospital so she can send money home to her family. She sings us some snatches of the songs with which she entertains her patients, revealing how that playfulness has undoubtedly lifted them in their hours of need.

To me, the most surprising and revealing narratives were those of healthcare workers such as Joanna, a doctor in psychiatry, based in Leicester, who has seen the number of formerly ‘well’ patients presenting with anxiety and depression rocketing.

Surprisingly, those who are used to living from one crisis to the next, she says, have often turned out to be more resilient. But we also hear how the shift to working online, from home, has impacted her own well-being, bringing the difficult conversations she has to have with patients into what she used to feel was her ‘safe space’. She talks of missing her colleagues and those ‘corridor conversations’ that help to contextualise her experiences with patients.

Alex, a newly qualified nurse, describes her first encounters with personal protective equipment, and how those physical barriers combined with the bizarre acoustics of the Excel’s Nightingale Hospital to make communication really problematic: staff had to learn to use hand signals to be understood. And I am deeply moved as she describes how notes from patients’ families helped them to communicate with those on ventilators through the toughest – and sometimes final – stages of their lives.

Claire, a ceremonial undertaker based in Devon, describes sobering tours around industrial units on the outskirts of cities, which had been adapted to store thousands of bodies, if needs be. ‘They never got commissioned, thank goodness,’ she says. But she also talks of an unexpected lockdown upside for some: ‘We did a number of funerals for people dying at home. Normally, they might have gone into hospital, but because of Covid they didn’t. So all their grandchildren and family were there and nursed them into their deaths together. For some, it has been a gift.’ Geraldine, an associate director of culture change for a London NHS Trust, was redeployed as Trust lead for staff support and well-being. She describes the extraordinary generosity of people and businesses at the start of the pandemic, stumping up everything from fridges to iPads, as soon as word went out. ‘We got 30,000 Easter eggs delivered at Easter… It was, in the early stages, like being a fairy godmother,’ she says. As the pandemic progressed, however, she realised that one of the best things they could do was try to improve the staff quarters and conditions – everything from making on-call rest rooms more habitable, to organising safe bike storage. It was time, she says, to challenge the ‘assumption that people who work in healthcare can give, give, give. Suddenly, they were being rewarded. And we realised how important that was. In the NHS we prioritise patients first, and actually we have to prioritise staff first [as well]: the more we care for them and the safer they feel when they come to work, the better they can provide safe and compassionate care to patients.’

The whole project has required skilful coordination and curation to deliver, via assorted lockdowns and across multiple professional and geographic territories, but according to Patey it has been hugely rewarding. ‘Listening to these storytellers,’ she says, ‘with all the wisdom, kindness and generosity of spirit that they share, has inspired me, moved me to tears at times and, ultimately, given me a renewed faith in humanity.’ I second that, but would add the vital quality of gratitude for what these individuals, and thousands like them, are bringing at this extraordinary, challenging time.

The Brixton installation concluded in January but will move elsewhere in the UK: Patey’s projects are designed to be easily replicated (while adhering to core content and quality criteria). There are already requests for the boards to be moved to a housing estate in Peckham, and – if her previous projects’ export success is anything to go by – it’s only a matter of time before it pops up in Adelaide or Los Angeles as well. I strongly recommend you listen in and self-administer a dose of gratitude. In fact, why not make it one of your five a day.