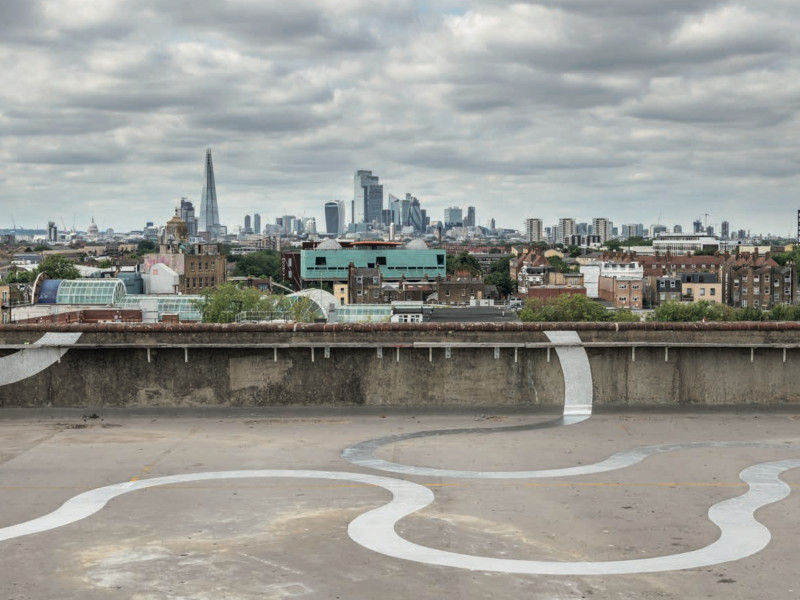 There are surely less dramatic ways of helping visitors to overcome any threshold anxiety than painting your entrance and its multi-level concrete staircase bubblegum pink: walls, ceilings, floors, railings, pipework and doorways are sheathed in this glowing colour – a giant, pink, internal prophylactic that winds up several sets of stairs. Rather than a deranged piece of interior design, this is an artwork – called hi boo i love you, it is Simon Whybray’s 2016 intervention for Peckham’s now famous rooftop sculpture park and bar, and has helped to create an instantly recognisable, highly Instagrammable identity for this al fresco venue atop a late 20th-century concrete car park.

The potential of this panoramic 10th-storey viewpoint first seized gallerist Hannah Barry back in 2007, when the London SE15 postcode was far from any hipster’s hit list. Bold Tendencies was the summer cultural programme she then launched, which has expanded over the past decade to include not just sculpture and good times at Frank’s Bar (whose elegant, robust structure was designed by Practice Architecture), but also classical and contemporary music, opera and – as of last year – dance. The brutalist, open-sided framework of the lower two floors has proved a rugged and compelling backdrop for dance and both chamber and large orchestral music. All it has taken to deliver these live performance experiences is a little expedient improvisation from Barry’s architect pals – Cooke Fawcett’s concertinaed plywood screen to soften the acoustic, and Practice Architecture’s boutique, hay bale and plywood chamber music auditorium. The cheapness and expediency of this venue even made possible the birth of a new orchestra: the Multi-Story Orchestra, a group of skilled, young and diverse players whose musical and educational talents and commitment to taking music beyond the concert hall has brought them an audience far beyond their Peckham origins, under the leadership of composer Kate Whitley and conductor Christopher Stark.

Over the years, the crowds – and the queues – to get up on the roof have grown, as has the kudos of being part of this seasonal urban arts scene. Of the notable names now adorning its concrete expanses, Richard Wentworth’s snaking aluminium trails (comprising the work Agora) from 2013 have proved the most photogenic, though the Derek Jarman tribute garden – a collection of beach grasses, rusting metal objects, pebbles and tarred and tumbled sleepers that double up as seats – is the more hospitable. But while the kudos of a rooftop view has spawned a multitude of followers – as well as imitators – never have Barry and her team at the not-for-profit community interest company that runs Bold Tendencies been as glad of that al fresco setting as during summer 2020. With theatres, stadia and concert halls horribly silent and likely to remain so well beyond the lockdown period, as soon as the Bold Tendencies team realised in late June that they were one of few venues around the UK that qualified for the softer lockdown rules they whipped up a new list of sculptural adornments and performances to last the shorter 2020 season, which began on 30 July and ends in late September.

As a local music-lover and regular supporter, it’s hard to describe the combination of glee and relief with which I booked tickets for three live performances in August, at the very reasonable price of £16 each. I have really missed live music, and while most creative freelancers are struggling, I am all too aware of the hideous chasm in musicians’ lives and livelihoods that this virus has ushered in. The prospect of a future without the wonderful, shared meditative experience of listening to musicians weave their spells over our collective sensibilities – in real life – would be bleak indeed.

This summer’s musical offering is pretty much confined to duets, needless to say, and the plastic chairs that are scattered around the venue in strategic clusters (to allow for a variety of ‘bubbles’) will accommodate only around 160 people, instead of the previous capacity of 700. In early August I was lucky to enjoy a sneak preview of the concert arrangements with Barry’s artist liaison manager Charlie Mills, who delivered another piece of good news: far from scaling back, the recent award of a 25-year lease on the rooftop (a welcome about-face for site owner Southwark Council, who had been scheduled to boot them out and demolish the building in less than two years) has justified further work that will expand and improve facilities for an even richer cultural offering from 2021 onwards. As soon as the 2020 season ends, Feilden Fowles, the Stirling Prize-nominated architects of the Yorkshire Sculpture Park’s wonderful Weston Building, will be working to transform the lower two levels to make the venue more versatile. Their refined material sensibilities will work beautifully, I am sure, to enrich the existing concrete structure’s gritty, grey contours with additions that include a foyer, retractable acoustic panels along the open walls – a vital move to enable a programme of amplified music – flexible seating, the insertion of a stage on the lower level, and back-of-house changing rooms, showers and kitchen. In this way, future Bold Tendencies’ programmes can include dance, electronic music and theatre in its offer.

And with the right, reduced audience numbers, on each enviably huge, social-distancing friendly 42,000ft2 floorplate, that offer should hold good for all but the most dreadful of virus prognoses. It gives a body hope! And hope is a rare and precious commodity these days.