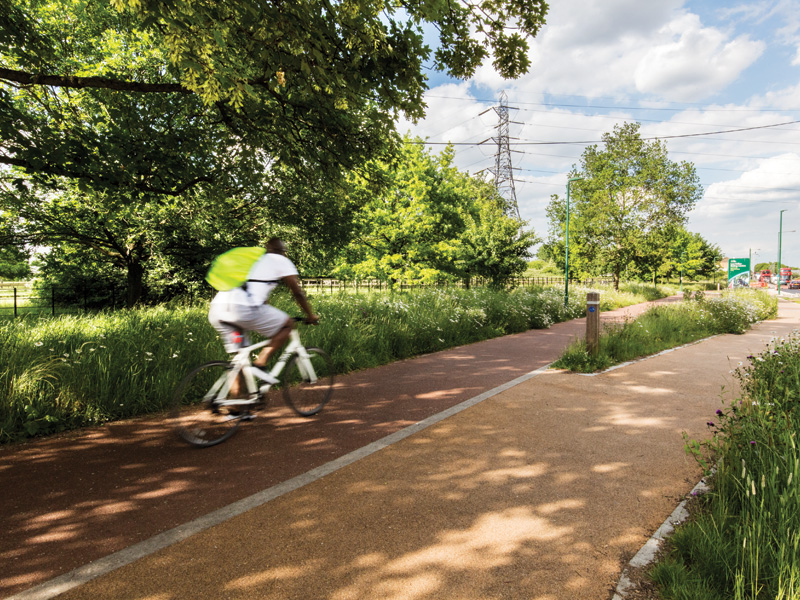 Veronica Simpson wonders what it would take to get a big city like London on its bike. She looks at a design scheme for cycling to be introduced in Waltham Forest

London is a city of 8.6 million inhabitants, with another two million predicted to arrive in the next 20 years. But existing peak-hour public transport is a misery, and roads are still clogged with cars, cabs and lorries (despite congestion charging). Making the city far more cycle friendly is the obvious solution, and Mayor Sadiq Khan recently announced a target of 80 per cent of all journeys to be made by walking, cycling and public transport. That is quite some ambition; to put that in context, currently only 2.3 per cent of all journeys are estimated to be made by bike.

So, how can people be persuaded to cycle across the city, when central cycle lanes are minimal, disjointed and still unsafe: with 432 cyclists injured or killed on the roads in 2014, that’s hardly an encouragement.

And yet one of the city’s furthest flung boroughs has shown how easily changes can be made, given the political will, commitment and integrated design thinking. In 2014, a Transport for London initiative offered a pot of funding to three boroughs to trial some ‘mini-Holland’ pro-cycling initiatives. Thanks to the campaigning of its local cycling group, Waltham Forest got the go-ahead, and signed up Clerkenwell-based practice what if: projects to develop proposals, taking on the role of lead consultant. After a year of operation of its new measures, the borough reported that car traffic in 12 key roads fell by 56 per cent – or 10,000 fewer vehicles – a day.

But this isn’t just about reducing car journeys. Says what if: projects director Ulrike Steven: ‘We work on the design of everything. The money was for cycling, but we said you can’t just improve the roads for cyclists. You have to include pedestrians, the public realm.’

So, a widespread programme of landscaping and public-realm improvements has run alongside the introduction of cycle lanes.

But joined-up thinking is required for that sort of integrated redesign, requiring buy-in from all the different departments that manage parks, public realm, transport and road infrastructure. And that’s not something the local government is famous for. ‘There was a bit of a battle,’ says Steven. ‘But Waltham Forest had a lot of political commitment.

There was a strong cycling campaign group that helped secure the funding for the borough in the first place. It also has its own highway engineers who are really good.’

The main artery through Walthamstow, Lea Bridge Road, had divided one side of the borough from the other since its expansion to a multi-lane freeway in the Sixties. Steven says that thanks to the backing of campaigning cycle groups and the council, ‘We cut a lane out on each side, and put cycle lanes in.’ These distinctive red cycle lanes are now the longest segregated stretch in the area. The landscaping that Steven and her team introduced on either side of the road is inspired by the nearby Walthamstow and Hackney marshes and Epping Forest. While Waltham Forest has witnessed a significant drop in car usage in key roads since the cycling measures have been put into effect, other councils are reluctant to follow suit

‘These are amazing landscapes,’ says Steven. ‘We took whatever was there and expanded it on to the street.’ This included letting the grass grow, installing sustainable urban drainage, and planting meadow areas and new trees wherever it could. Says Steven: ‘Shop keepers, local schools and residents were involved with the planting…and continue to look after the planting and trees, including watering and mulching.’

Treating the whole streetscape as a unified piece of design, the team tackled everything from seating to signage and lighting. Bollards double up as signage, playful objects are introduced for kids to climb on, and plenty of seating has been introduced – creating more of a sense of the streets as places where people might spend time, rather than rush through.

‘Copenhagen’ crossings have been installed that give priority to pedestrians at junctions, and ample bike parking has been introduced including ‘bike hubs’ outside railway stations to encourage commuters to cycle rather than drive. One of the first projects to be implemented was a cycle bridge over Lea Bridge Road; spanning the former aquaduct, it links cyclists to the whole recreational corridor of Lee Valley Park. Says Steven: ‘It is painted white, like Monet’s garden bridge, and in the tradition of white garden bridges, with integrated signage and lighting.’

The job is far from done yet. Says Steven: ‘It’s still going. It’s a marathon. But working with Waltham Forest has been really good. It treats us like we’re part of the team. We make ourselves quite available so we don’t clock hours. From our end it’s been quite a rewarding process, because it’s something you can put your name to; it’s completely up our street. We all cycle to work. None of us has cars.’

Awards have followed, from the London Cycling Award 2015, to the New London Architecture Award 2016 for transport infrastructure and, more recently, Transport Borough of the Year in 2017.

Despite Waltham Forest's success, it’s still an uphill struggle to convert other parts of London, never mind the UK. Why does Steven think that is? Within local councils’ planning departments, there is a fear of designers, she says. ‘They think designers make things more expensive…but when we started working with Waltham Forest, we asked to look at what material palettes they were working with. We said show us your catalogue. We found some better things in the catalogue without making it more expensive. Of course, you have to pay our fee, but it’s co-ordinating things and making it look coherent; it makes things calmer. You don’t want to see the design. You don’t want to notice it. That’s when it’s well done.’

Steven reckons their square metre cost has been as low as £170. For the massive potential benefits to the community – cycling more, walking more, breathing in fewer fumes, never mind the consequences for road safety – it’s no surprise that the local feedback has been so positive, according to Steven: ‘When you talk to people in the area, and they hear you’ve been working on it they say: it’s so brilliant. It has made a huge difference.’