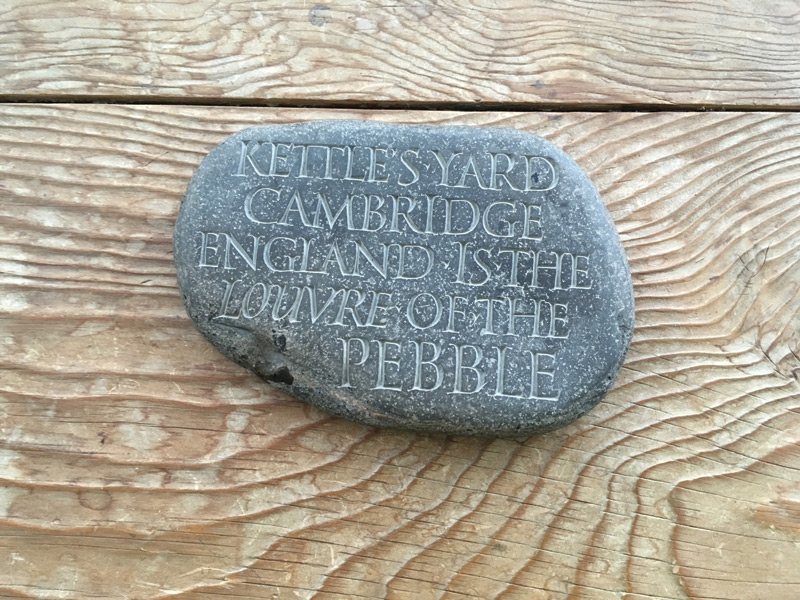 Kettle’s Yard in Cambridge has been a mecca for contemporary art, design and architecture buffs since 1957 – ever since former Tate curator Jim Ede and his wife Helen rescued three workers’ cottages from demolition and, through a few gentle, modern interventions, converted them into a welcoming home that demonstrated how perfectly appropriate contemporary art could be in a modest, domestic setting.

Against a post-war mood of institutional conservatism that dismissed anything newer than a pre-Raphaelite, they brought in the work of their friends, Ben and Winifred Nicholson, Henry Moore, Barbara Hepworth, Juan Miro, Naum Gabo and Constantin Brancusi, when that work had little monetary value, and made it sing through its placement alongside comfortable thrift shop and mid-century furniture and eclectic objects.

Pebbles played a big part – as architect Jamie Fobert points out on our press tour, directing us to the large, grey pebble which Ian Hamilton Finlay inscribed with the words: ‘Kettle’s Yard, Cambridge, England is the Louvre of the pebble.’ There are many artful arrangements of pebbles here.

Ede was also pioneering in his choice of Leslie Martin and David Owers to design a large, modern extension in 1970, to house his expanded collection and create space for events and performances (talks and live music have long been a part of its programme).

A cavernous, double-height space of strategic rooflights and interesting alcoves, it is typical of that post-war period, as Fobert says: ‘Where mid-century modernism became more soft, more gentle, very careful, very interested in natural materials, volume and light, and very unassuming in terms of its materiality.’ This combination of contemporary architecture and inspired eclecticism against a palette of pale walls, sculpted light and natural materials, has been massively influential on architecture and interior design styles for more than 60 years.

Fobert himself has a long and deep relationship with this site, having spent the past 14 years, on and off, working on the project. Initially hired in 2004 by former director Michael Harrison to build an education wing, the project was delayed and then, thanks to the injection of new funding and a new director, Andrew Nairne (after Harrison’s untimely death) grew to incorporate knocking down parts of later gallery additions, and expanding into additional buildings its owner University of Cambridge Museums had acquired on the block in the interim. Fobert’s new wing takes its cues stylistically and atmospherically from Martin’s and Ower’s iconic extension: there are some nice brick floors, sympathetic use of wood, and tasteful shop fittings that echo the simple domestic shelving and dining arrangements in the cottages. The whole scheme now works far better to welcome and then percolate visitors through the various enclosures, thanks to a large glass-entrance space, framed in bronze.

Fobert has done a great job of making the site feel generous and spacious when you are in it, while keeping the same scale and brick facades (albeit improved and upgraded) on the outside, as the city’s planners demanded.

A splendid education room and kitchen has been dug into the basement, expanding capacity for educational activities by 200 per cent; the new galleries are taller, more accessible and much better lit, and there are some lovely details, such as the rooflights Fobert and his team have inserted into the galleries, which echo the scale and proportions of those in the original extension.

The new concrete floors in the galleries have a crude, honest materiality in tune with Martin’s favourite brick, while Fobert’s trademark material – mild steel – appears in a dramatic, zig-zag staircase that sculpts out the circulation space between the new wing’s three floors. There are also delightful views created by new window apertures, linking the site to the spires of nearby churches and college chapels.

But after the initial enthusiasm of my visit I found myself more preoccupied with the work that had been done in the original cottages. These were not intended for refurbishment when Fobert was hired in 2004.

But once the project had expanded and building works came right up to the house, because the site is so constrained there was no way of getting supplies on to it except by lifting them over the cottage roofs via cranes. So, the cottages had to be cleared; the precious items stored or loaned out.

Which is all well and good. Thanks to two years of maintenance and upgrading, the original cottages and Martin’s extension are better ventilated and heated, and ancient cabling has been tidied away. But what doesn’t sit so well is the feeling of ossification that lingers, thanks to the exacting, fastidious replication of the Kettle’s Yard of old – every painting, pebble, chair and glass bauble is exactly as they were. Somehow, the original now has the feel of a replica. Don’t get me wrong, I loved Kettle’s Yard, found it quite magical and miraculous when I first discovered it nearly 10 years ago, and visited on every subsequent trip to Cambridge. But although Ede – who died in 1990 – was clearly a man with a fantastic eye, he was also a man of vigour and imagination. Would he have wanted his home to become a shrine?

Fobert feels it is right that the original room settings are preserved. He says; ‘Jim moved things around for 40 years. But near the end of his time here, things became very fixed because he felt he’d achieved an equilibrium between these different elements.’ I’m not so sure. It seems to me that, while there is a clear benefit to keeping some spaces as they were – perhaps on a rotating basis – to celebrate Ede’s curatorial touch, there is also scope for enlivening and updating that dialogue between home and precious artefact, between objects and artists of different eras.

There are some uplifting new artist interventions on the site: Cornelia Parker was drawn to the small suite of rooms where Helen Ede would take refuge while Jim entertained, and she has daubed a lacework of white blobs on to her windows, using clay from the cliffs of Dover; evoking both privacy and delicacy.

Rana Begum has created a rippling cocoon of Bangladesh-made basketwork in the church of St Peter’s, next to the cottages, summoning the comfort and embrace of shared spirituality. But if real experimentation and innovation only takes place outside of the Ede’s sacred home environment in the gallery or surrounding buildings, it strikes a wrong note.

To update and enliven the art of inspired adjacencies – that would truly be the way to celebrate the life of a master mixologist.