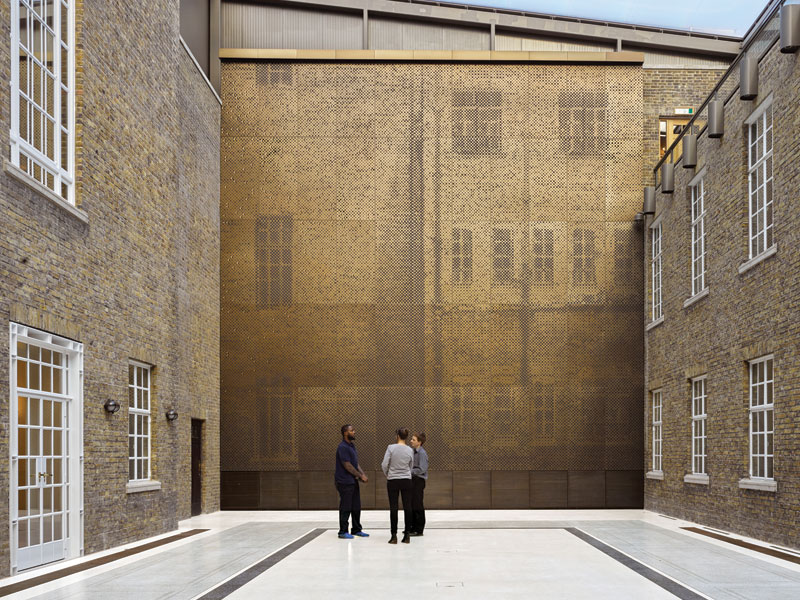 Veronica Simpson looks at the revival and improvements to Hackney Town Hall, turning it into a state-of-the-art local asset

Can you put a price on civic pride? As austerity-UK lurches towards Brexit-Britain, it’s a rare local council that can justify spending money on a fancy new town hall, even if its old one is not fit for purpose. But if it builds a cheap new town hall what does that say about the value placed on its role as custodian of the area, its citizens and staff?

In 2005, Hackney Town Hall took a strategic decision to restore the dilapidated structure of the once handsome building that had housed this London council since 1937.

Built by architects from Lanchester & Lodge with a care and attention to detail that now, in its restored form, gives it the elegance and style of an art-deco ocean liner or classy hotel, it had been Grade II listed in 1991, in recognition of the quality of its architecture and original art-deco interiors. But 12 years ago, having had no work done on it since the Seventies, it was in a terrible state of disrepair.

Knowing that there were many more urgent services the council had to focus on, the then mayor Jules Pipe took the long-term view, that this ‘jewel in Hackney’s crown’ could be brought back to its former glory, but slowly – partly for financial reasons, but also to avoid having to close its vital functions off from the public.

In 2005, Hawkins\Brown was appointed to carry out its phased restoration, rolling out the programme as budgets and schedules allowed. As with the best restoration projects it’s hard to see where the work has been done. But the skill is not just in the research that saw the practice forensically discovering and then replicating the exact paint colour of walls, ceilings and radiators, or restoring the graceful brass and copper railings up every staircase (with the help of a Cambridge professor who identified the metal’s exact composition and then how to care for it).

It began with the logistics of where to start, how to make the reworked building work harder for its money. What could be done to squeeze new functions and flexibilities into the existing floor plate? But first the logistics: some of the Town Hall functions had to be moved out for work to start. So Hawkins\Brown constructed a new annexe on Hillman Street.

The first major piece of refurbishment was done on the Assembly Hall. An elegant, window lined, parquet-floored room on one side of the Town Hall, its street-front entrance was restored, a glamorous new bar created from a rear function room, and infrastructure updated so that it could become an entirely independent entity that operates outside of council hours, restoring a major asset to Hackney’s citizens.

As client representative Richard Male says: ‘The Assembly Hall had been out of use for 20 years. It used to have tea dances here, and wrestling, but because of health and safety we had to close it down. Now, you can shut the whole town hall down and keep the hall open. The chief executive does his ‘roadshows’ here now – we used to hire venues for that. It’s busy all weekends with weddings. Everyone is jostling to use it – The X Factor was held here two years ago.

The potential for income generation is great.’ Male could hardly be prouder as he leads me and the Hawkins\Brown party on a tour of the facilities, alerting me to the details, directing my gaze to the scalloped edge of the bronze skirting on a new reception desk, where it meets the floor; he points out that it is exactly the same scalloped detail as the bronze at the base of a restored, original wall light nearby. ‘That’s the level of detail we’re talking about’, he says.

Attention to detail also meant ensuring that at least 25 per cent of the workforce helping on this phased project were local, including craftsmen such as marble restorer James Elliott and upholsterer Terry Page (London Upholstery), who turned out to have been here in the Seventies, as a young apprentice, giving the council chamber’s leather seats their first upgrade since the building opened. ‘There aren’t many people who can still do the stuff-and-stitch work,’ he commented, though he was proud to see how well the original chairs had worn. The Assembly Hall, now standing as an independent entity with its own access, has a new bar. Photo Credit: Siobhan Doran

This council chamber is one of the most impressive spaces, its wood-panelled walls gleaming, its new green leather upholstery scenting the air with an old-time opulence. You wouldn’t know it, says Marshall, but, ‘this is the room that has had the most hidden work done.

'The panelling is all original. Amazing French polishers stripped back the timber to bare wood, repaired it, then varnished it revealing its beautiful figuration and tone.

All the seats came out. Light fittings came down. At each seat there’s a little voting system. New ventilation ducts were routed through the ceilings of the marriage suites [on the floor below] and under the chairs. We have really tried to maintain the space without impacting on the elements of historical significance’.

Through careful space planning – installing open-plan offices and the elimination of corridors – staff capacity has been increased by around 70 per cent. Previously unused rooms have been brought back into circulation, while new spaces have been created within the original footprint, including a council print shop, catering kitchens and two 250 sq m atria weather-proofed with ETFE roofs.

New doors from the two marriage suites (one of them new) now link to these atria, enabling wedding parties or other audiences to spill out into these generous squares. The old and the new marriage suites now have cutting-edge sound systems and ventilation, as well as changing rooms. Says Male: ‘It was a state-of-the-art building when it opened in 1937, and the goal was to make it state of the art for the 21st century – but without any visible impact.’

The pleasure that its occupants now take in using this building is visible at every encounter. Combine that with the symbolic resonance of the underlying gesture – bringing back to life a neglected gem from a more optimistic, ambitious and civic age – well, I’d say this has been money well spent.