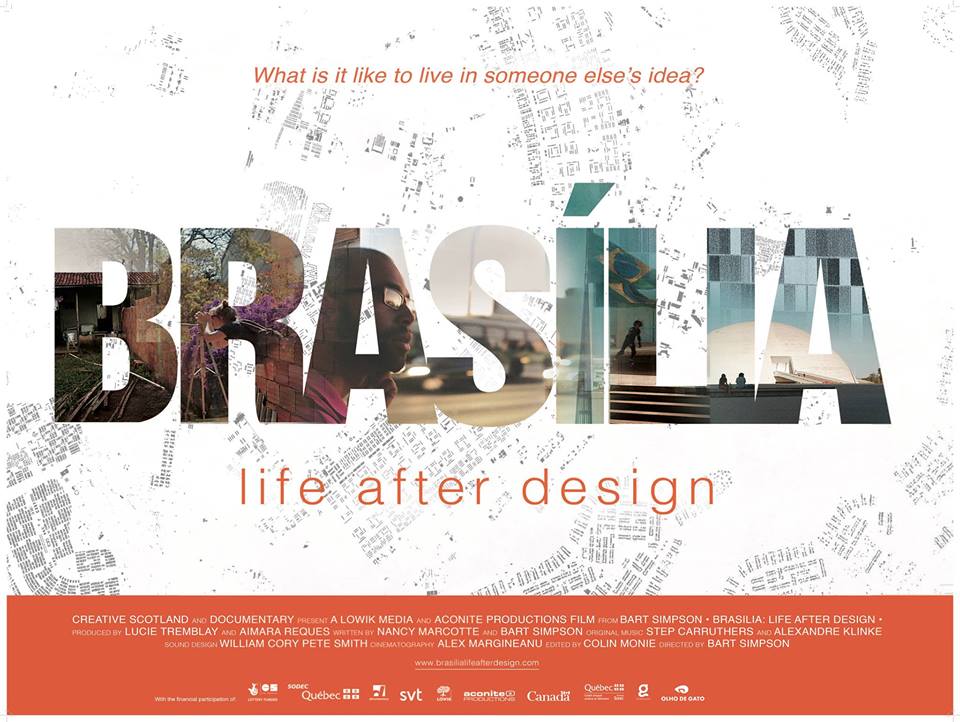 A documentary that follows three individuals who live in modern-day Brasilia, 'Brasilia: Life after Design' brings a human face to a Utopian ideal. Ahead of its London premiere, we spoke to director Bart Simpson to find out more.

The London premiere of Brasilia: Life after Design will take place at the East End Film Festival in London, on Thursday 26th of April. Ahead of its general release in selected UK cinemas in May, the premiere will offer viewers a unique opportunity; they will be able to watch the film and a special panel discussion, before having their questions answered by the film’s director, Bart Simpson, and producer, Aimara Reques.

Brasilia has been on the international festival circuit since its world premiere at the Sheffield International Documentary Film Festival in 2017 – and has been very well received. The film offers a “meditative look at what it’s like to live in someone else’s idea”, focusing on the capital city of Brasil, Brasilia.

An 18-hour drive from Rio, and 2,000 kilometres from the Amazon rainforest, the city of Brasilia is a concrete city that was envisioned as a ‘utopia’. It sprung from the desert in the late 1950s at the rebirth of Brazilian democracy, when architect Oscar Niemeyer and urbanist Lu´cio Costa invented an urban plan that attempted to micromanage daily human activities. The visionaries’ goal? For Brasilia to become a space that would “birth the new Brazilian citizen”.

However, the city now acts as a backdrop to people’s feelings of isolation, their changing values, and the dynamic politics at play in Brazil today. The lingering reminder of Niemeyer and Costa’s dream is visible within the lives of those living in Brasilia; Brasilia: Life after Design follows three such individuals in their day to day lives. The first, Sergio, is an urbanist who defends the city plan – but knows it must adapt. The second, Helize, studies to become a federal civil servant; but this is a dream that many of Brasilia’s students have, and so she must fight for her place. Finally, Willians is a street vendor by day who seems to love the city – but he continues to try and find meaningful connections in a city that was built to divide.

Brasilia takes viewers into the heart of a city that is rarely seen by the international viewer, bringing a human face to Niemeyer and Costa’s utopian ideal. Ahead of the London premiere, we spoke to the film’s director, Bart Simpson, to find out more about this insightful documentary.

Why do you think that the stories of those living in Brasilia are stories worth telling?

The city of Brasília is designed to divide…work, home and leisure are all in different geographical sectors of the city, and the plan intended to make it ‘easy’ for people to function on a daily basis. But by nature, people want to connect with each other. So for me, the question became ‘how do you make human connections in a city built on division?’  There are examples of this all over the world, but Brasília’s unique political history and highly-structured urban plan made it an extreme - and timely - example. It’s not a film about architecture; it's a film about the impact of architecture and planning, and I think that’s a big difference.

What was it like to witness the juxtapositions within the city first hand?

I first came to Brasília by accident in 2004, for a film festival. To my eyes, when I landed, I thought I was in an East Berlin that was transplanted into the desert. My naive notions of the country of Brazil (football, Carnival, Amazon, bossa nova music) were opened up when I realized Brasília was really none of those. Brasília is a city of paradoxes, and for me that’s what’s so interesting about it. Do you think most people living in Brasilia have a positive, or negative, reaction to the city?

I lived in Brasília off-and-on for about a year and a half over a five year period, and I think the answer - as you might expect - would vary. Brasília - like any capital, really - has been the butt of jokes from places like Rio and São Paulo. It’s a government town, and that’s probably the cause of much of the resentment.

What I found interesting is that the younger generation in their 20s, in particular, take great pride in thinking about how Brasília can work for them. The city plan is by and large set due to its designation as a UNESCO World Heritage Site, but that doesn’t stop the new generation in finding ways to redefine the city.

There’s also an important point to be made about the satellite cities - initially built in a very ad-hoc fashion over the years, the population in those surrounding areas vastly outnumbers the people living in the plano piloto (the original idea for the city). In another 50 years, it will be interesting to see how that relationship looks.

How important was it to include the old footage / interview with Oscar Niemeyer?

When I started the film, the first thing I did was track down Oscar Niemeyer for an interview. He was 102 at the time and his health was failing, so I was very thankful we had the opportunity… it might have been the last interview he ever did. The result of that interview [a small part of which appears in the film], really helped me move the film into its current state.

There have been a number of films on Niemeyer, Costa, and the history of Brasília… but at the time we started filming, not a lot [of films] about what it might be like to live in the design they created. I realised that I wanted to make a “ground-up” urban planning film, not a “top-down” one. Having the layer of historical and political context from Niemeyer in the film was important in personalising Brasília’s birth, to contrast with the lives lived now that the city is on its way. What do you think other designers / architects can learn from Brasilia as a project, and also from the film?

I think that the idea of a place like Brasília, for planners and architects, must be highly appealing; to be given carte blanche to design and build a city from scratch. The architects and planners I’ve talked with have said that they rarely see how their work affects the everyday person, and I think the film offers that perspective.

What reaction has the film had with audiences so far?

I’m happy that the film is something that the audiences might not expect. People have said it creeps up on them, and although everyone will take something away that is particular to them, most have said they feel like they’ve just visited the city. That was the hope, so I’m glad it’s been conveyed.

Anything else to add?

I think there are some exciting films coming out of Brasília these days, particularly in the satellite cities. Films by directors such as Adirley Queirós really helped me orient myself in the audiovisual culture of Brasília, and the writing that’s been done on the city from a variety of domestic poets and authors shows that it’s a city that will continue to be explored. I’m very thankful for the lifelong relationships we’ve made during the process, and these friendships absolutely influenced the final film.

Brasilia: Life after Design will have its London premiere as part of the East End Film Festival, at Rich Mix on the 26th April, 6pm. It will be available to watch in select cinemas from May, and available to buy on DVD/online in the UK from the 28th of May.