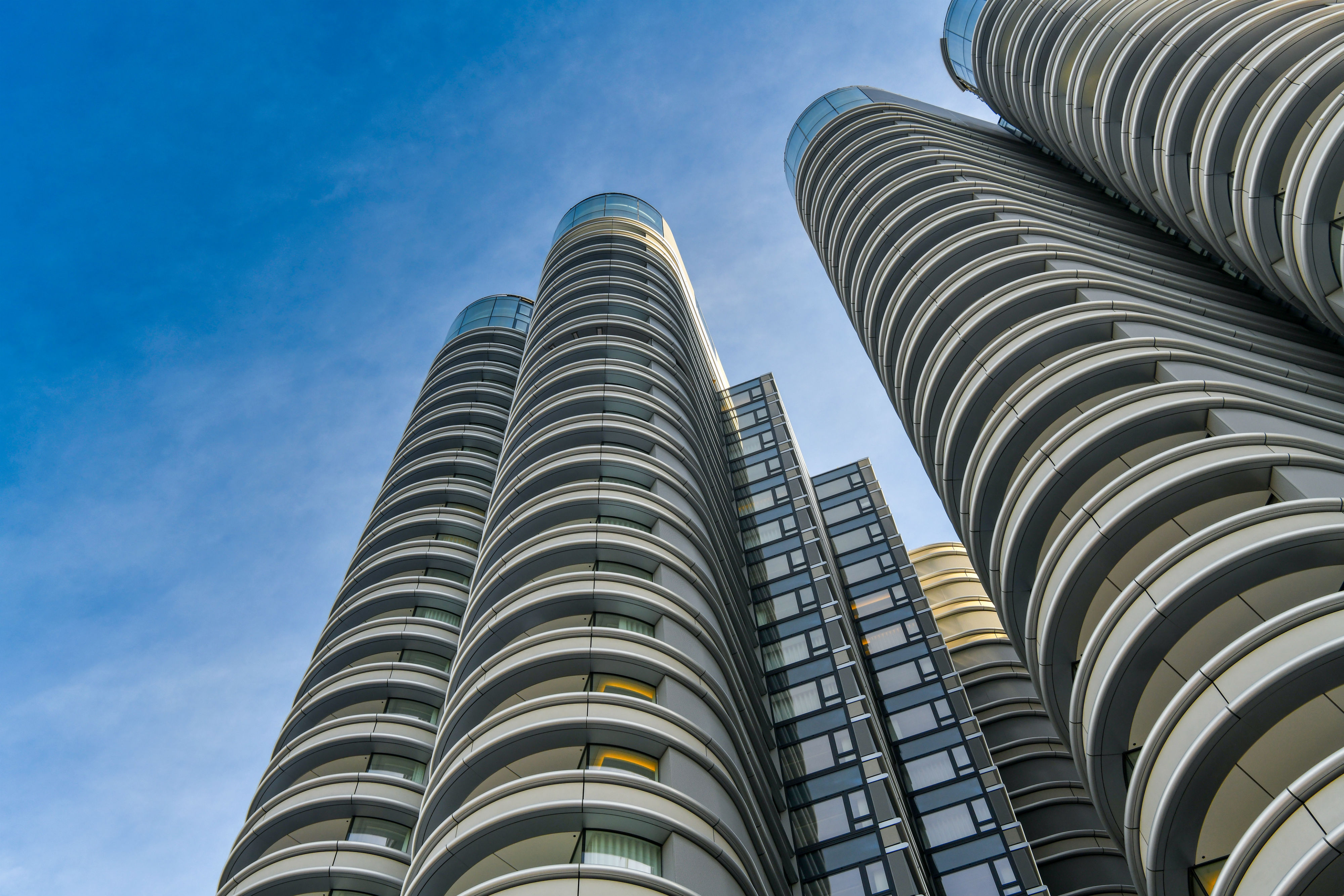 We visit the Corniche, one of three luxury developments that make up the new Albert Embankment Plaza, to find out more about the development and visit its award-winning show apartment.

Gazing out over the river Thames near Vauxhall, south London, three high-rise buildings sit in various stages of completion. They are nestled on the Albert Embankment; the smallest of the high-rises, Merano, is the only one finished, housing office workers and apartment-dwelling residents alike. The middle building, the Dumont, is currently a building site – it’s not due for completion until 2020. The largest and most extravagant of the buildings, however, is the last: the Corniche.

Designed by internationally acclaimed architectural practice Foster + Partners, the Corniche is a luxury residential development made up of 168 apartments, ranging from studios up to four-bedroom penthouses. Together, Merano, the Dumont, and the Corniche developments make up the Albert Embankment Plaza, a new offering of luxury developments by St James.

All three developments have been designed by acclaimed creative studios; Merano boasts Rogers Stirk Harbour + Partners as its architect, whilst the Dumont was created by David Walker Architects. Each building has its own unique style, but it could be argued that the Corniche takes this one step further. Beautifully curved, and angled to receive some of the best views of London, the Corniche echoes the river below and pays homage to the stern of a boat. Each of the balconies lies on these curves, offering panoramic views of the River Thames and London’s unique skyline.

With three separate developments at their disposal, St James is offering residents of the Albert Embankment Plaza a range of 5-star luxury facilities. Within the Corniche, residents will have access to a pool, Jacuzzi, sauna, spa, steam room, different treatment rooms, and a resident’s club lounge with a stunning roof terrace. In parallel, the Dumont will host a private cinema, ten pin bowling lane, games room and another resident’s lounge.

In the Dumont, residents will also have access to a private dining room – with its own kitchen – and a breakout cocktail space with a balcony; both of these spaces can be hired out for residents who wish to entertain guests away from their homes. The three complementary developments hope to create an open, lifestyle-centric hub, offering residents everything they could need – including central London on their doorstep.

Intrigued by these new developments, and what the Plaza trio could bring to the Albert Embankment, DesignCurial visited the Corniche and took a tour of its three-bedroom show apartment - which was recently crowned the winner of the Evening Standard’s Best Luxury Home category at their 2018 New Homes Awards. Emily Williams, the co-founder of luxury interior design studio BradyWilliams (who created the show apartment’s stunning interiors), showed us around the space she helped create.

The Corniche’s show apartment is the only home on the 22nd floor of the building, taking up the entirety of the floor plan; as we step into the space, Foster + Partners curved architecture becomes apparent. “The architectural aspect is unusual,” says Williams. “Designing with curves is always a challenge, but actually because it’s so spacious, it becomes an advantage. You’re actually giving to a room instead of taking away from it; we matched the curve of the building with the furniture – so there are areas where we’ve got curved sculptures or furnishings.”

“[Also], because we were dealing with this massive, panoramic view, we had that very much in mind when we tried to pick the various furnishings. We focused a lot on reflection because of the views – virtually in every room, we’ve covered it somehow.” Williams leads us through a large, open entrance lobby; the BradyWilliams team have added polished plaster to the walls of the space, which reflect the light with a subtle shine.

The statement piece within the entrance lobby is a large, antique mirror. “It’s very flattering; it’s not an accurate mirror but everyone feels nice in an antique mirror,” Williams laughs. “[But] because it’s quite big and it’s a focal part of the room, it’s not meant to be too in-your-face.” She also points out a painting of a horse that adorns one wall, mentioning that it is by a British painter. “As a show apartment obviously you have to be quite mindful of appealing to lots of different nationalities,” explains Williams. “We always try and play it safe; the only animals we would ever show are a horse or a bird.” A door leads us through to the main living space; the panoramic, curved view of London’s beating heart is the first thing that catches the eye. Williams agrees; “[The Corniche] is built on the perfect spot so that you really do get to see this quite expansive [view]. We call the balcony a ‘fish eye’, and we chose to embrace a classic sitting area because it did just seem to lend itself to the best view.”

Mixing contemporary furnishings with some classic pieces throughout the space, Williams explains that utilising the curves remained at the forefront of BradyWilliams’ thinking. However, there was another challenge that the team came up against. “We had to play a little bit with symmetry because there isn’t any,” says Williams, with the example of the TV unit in the main living area. “We decided to design a TV unit that was off-centre for the very reason that you can’t centre it.”

Moving through to the kitchen and dining room space, we are greeted by a second ‘fish eye’ balcony, and a double aspect view of the city below. In fact, the whole room is on the outer edge of one of the Cornice’s curves. The kitchen also happened to be the space that needed the least work by BradyWilliams, with Williams mentioning that they “just added the furniture, the curtains and the pendant light.”

Just outside the kitchen, a second, smaller entry into the apartment has still been dressed by BradyWilliams, as Williams explains it is more likely to be the apartment’s “day to day” entry. This is also the entryway that lies closest to the show apartment’s three bedrooms. As the apartment had three different spaces, it gave room for BradyWilliams to create three individual designs: one feminine, one masculine and one neutral bedroom. All three rooms feature bespoke elements and their own bathrooms.

The ‘neutral’ bedroom has been given a calm, elegant and simple colour palette of whites and creams. The ‘feminine’ bedroom is also the apartment’s official master bedroom – its en suite bathroom features a large bath, set beside a full-length window that offers an extraordinary view of the city of London. “This is a view completely your own, up here,” says Williams as we stand in awe. “It’s your own bubble, but you can see all of this – I think that’s what makes it so calm. It’s such a sense of place.”

Discussing the ‘feminine’ bedroom, Williams says, “We had a curved room to contend with, but we wanted to make it about the view – we wanted it to fee very light, fresh and feminine but not girly.” Acting against the huge view that looks north over the river Thames, the ‘feminine’ bedroom includes a bespoke dressing table which mirrors the room’s architecture, as well as an artistic headboard featuring gold leaf-shaped embellishments and a pink, blush and cream colour scheme.

The final bedroom, designed with a ‘masculine’ palette, features more bespoke elements and a grey, navy and blue scheme. Though it may not be considered the master bedroom, this third bedroom does have its benefits; it is connected to the show apartment’s expansive outdoor terrace. BradyWilliams was even given a brief specifically for the terrace’s design. “All the planting had to be face, [so] we picked things that look as real as possible,” Williams says. “We had a bespoke bar made, and we wanted it to feel quite fresh.”

Heading back into the apartment via the terrace’s other door – which leads to the large entrance lobby – Williams mentions that from the start of concept to procurement, BradyWilliams’ design process took three months, with another three weeks for installation. “The challenges were in terms of [the apartment having] unusual architecture, but it was a pleasant challenge. It’s always nice when you’re not trying to conceal with design,” Williams says. “You’re enhancing, and that really makes a difference.”

By November 2018, the Corniche is set to be completely finished, with all residents moved in. What does this mean for BradyWilliams’ show apartment? Not much – it found a buyer only three weeks after the interiors were completed. It’s a testament to BradyWilliams’ remarkable interior design, proving they are well versed in creating luxurious spaces. As for the development itself, the Corniche only has a few apartments left to be sold; and with the Dumont’s completion only a few years away, Albert Embankment Plaza might become a new, thriving hub sooner than expected.