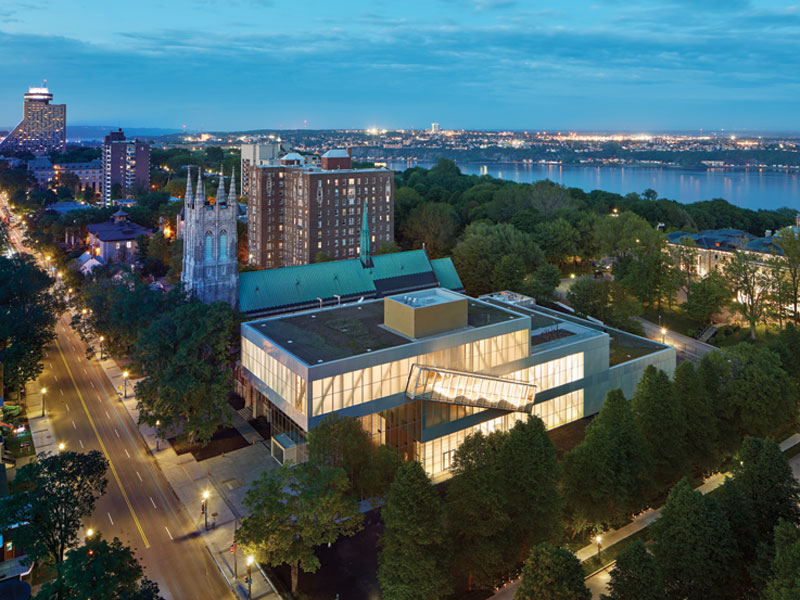 During the launch of the Pierre Lassonde Pavilion extension to the Musée national des beaux-arts du Québec the word iconic was bandied about. But the building’s architect — OMA — has given Quebec City anything but an iconic structure. It may be by the same architect as Beijing’s CCTV building, but try putting this on a T-shirt and the silhouette will look more like an Amazon three-parcel delivery than anything else. This building is essentially three box volumes on top of each other - largest at the bottom, smallest at the top, stepping down to the back of the building. They are glass boxes, which also reduce in clarity, or increase in opacity, as you move away from the entrance to the building, which fronts on to Quebec City’s Grande Allée — the thoroughfare that carries on into the very centre of this UNESCO World Heritage-status city. OMA’s new building completely changes the game for this 83-year-old institution: doubling gallery space and becoming its focal point. It’s called an extension and it’s called a pavilion, but don’t be fooled by either of these misnomers. Night-time view of the side of the pavilion looking towards the Grand Allée and the main entrance. Image: Bruce Damonte

This is now the main building of four that make up the site and it has become the true entrance to the whole experience — and a very grand one at that. As you stand in front of it on Grande Allée you’re met with a wall of crystal-clear glass some 26.5m wide and 12.5m high. Walk in and you are in a dramatic cuboid space rising unhampered — a huge void under a 20m-cantilevered ceiling (that begins outside the building). In the original design there was the possibility that this would be open to the elements, but it proved too good a piece of real estate to leave open. To the left in this space is what looks almost like a child’s simple representation of a house - a square with a triangle on top and a door in the middle (no crossed windows or chimney with curly smoke, but you get the picture). This is in effect the extruded form of an existing presbytery that joins the building at a right angle, at this point providing a cloakroom and other back-of-house facilities. The presbytery is alongside the Saint-Dominique church, which is also slated to be absorbed into the museum at a future date. This extrusion is a grand gesture within a grand gesture and formed of a single piece of concrete that was cast flat and then raised up through 90 degrees to its current position. Where the exterior is boxy (elegantly simplistic and confidently boxy, don’t get me wrong), the interior is a series of these grand gestures: very large public circulation spaces, resting areas and the galleries — plus a shop of course. Covering both the grand gesture and circulation space bases are the astonishing staircases that greet you as you move out of the first box space into the second part of the lobby — a space that’s a mere 7m high. These entwined staircases, made out of four sections of steel, rise up through three floors and are nothing short of Hollywood. These are the sort of grand sweeping staircases that you’d expect Fred Astaire to come dancing down sideways in top hat and tails, tapping his cane as he glides down three and back up a couple. In fact during the process of designing the circulation and staircases they did look at dance steps as part of the process: ‘Probably we were a little bit bored and thought that it would be too sterile to just make everything rectilinear!’ says OMA’s Shohei (Sho) Shigematsu, associate and director of the virtually autonomous New York office, who headed up this project. ‘It’s about movement, so we looked at the choreography of dance and how we could express the movement of people,’ he says. ‘We had to choreograph complex circulation issues, so we wanted to elevate that conversation further. My work on the Cornell University extension [Milstein Hall, 2011] also has this sort of very defined box, but there’s very organic concrete domes and I’m always interested in that kind of encounter of the very rectilinear and some organic moment.’ In all, the interior space is split almost 50/50 between circulation — a lot of which also doubles as event space — and the galleries themselves. The ‘extruded’ form of the presbytery in the dramatic entrance atrium. Image: Bruce Damonte

Each of the three, above-ground floors houses a single new gallery. From the ground floor you can also descend to a 256-seat auditorium space, and if you continue past that there is a long, wide corridor that links this building underground with the main original building, set some 300m back from Grande Allée in the historical National Battlefields Park (the 103ha site of a major battle where the English drove the French out of Quebec City in 1759). One more grand gesture you should know about is the gold-coloured, central lift core, which is offset to the right as you enter the building. Shigematsu says this is a nod in the direction of Pierre Lassonde, who made his pile from mining the shiny stuff. His donation of Can$10m (£5.84m) to the overall Can$103 (£60m) cost of the building also saw it all clad with his name.

The core is shifted to one side to allow the galleries to work optimally in terms of space, but chiefly to keep the ground-floor opening space column free. This did, however, present one small problem in that the circulation space on the second and third floors would have felt somewhat compressed and out of sync with the rest of the building. Answer? Another grand gesture staircase. This time it is completely rectilinear, but it is the only element to puncture the sleek sides of the three-box volume. The staircase goes outside the building and is enclosed in glass again. The sweeping staircases are an organic statement within the rigid, rectilinear, box volumes. Image: Bruce Damonte

From the outside it looks like a long, clear, rectangle clinging magnetically to the outside of the structure at a jaunty 30-degree angle (or thereabouts). ‘It was actually quite nice to break our own rigid system and go outside the box. That’s the kind of moment that we enjoy: we make a strict rule and we drive a process through that strict rule,’ says Shigematsu. ‘So for one moment we think “fuck the rules” — let’s just enjoy being outside of the rules — kind of luxurious. We thought that this could actually be a combination of the circulation and the window, almost like in the window, immersed into the woods.

I’m also quite surprised by the mental change that you get just by knowing that you’re going out and coming back in, crossing that threshold. I think it really refreshes the experience.’ There’s another Hollywood touch on this staircase too, in that all the risers are back lit to give it that extra bit of pizzazz. And that in a nutshell, or a glass shell, is the building, except it is, of course, very much more than that — it’s a sum of its parts and a sum that adds up nicely to a satisfyingly simple answer. Back outside the building, viewed at a slight angle from the Grande Allée, you see the three volumes stepping back into the historical park. Overview, showing the site of the new building in relation to the existing buildings. Image: OMA / Site Aerial

This stepping provides two large terrace spaces, leading out of the second and third floors, that are part paved and part landscaped with the flora equivalent of an infinity pool, which take your eye out into the park itself. Even the planting itself is an abstraction of the park’s topography. Inside the glass boxes, the structure’s supporting steel framework — as is OMA’s wont — is celebrated, not hidden. At one point the perfect place for a window is retained despite the fact a beam travels across it diagonally — the two existing in harmony. There were two systems in place, says Shigematsu, for the structure and the windows, and the two came together here. Also, at one point, glulam had been considered instead of steel to reflect the Canadian timber culture. ‘It could have been beautiful, but it was cost-prohibitive,’ adds Shigematsu. The glass itself has three layers to help protect against the weather — and in particular the cold Quebec winters, which can see snow on the ground for more than half the year. Managing the light is, of course, vital and solar gain is controlled with a diffusion layer, an embossed layer and a silk-screened layer. The grand new entrance on the Grande Allée, with its dramatic cantilever, and the presbytery to the left. Image: Philippe Ruault

The form of the steelwork — reminiscent of Milstein Hall — is reflected on the glass in a way that at first looks like shadows, but is a deliberate graphic echo of the steelwork’s form. The harshest parts of the winter will also see a slight reorientation of the building as more people visit in their cars, and so enter from the carpark via the back of the building through the underground tunnel. Apart from this physical link, this excellent new building owes little or nothing to the other museum buildings. The view from the entrance, with the golden service core visible to the right. Image: Bruce Damonte

In all other respects this building turns its back on the original museum and, to mix metaphors, completely eclipses it. ‘It used to be a museum facing a park and now it’s a museum facing a city,’ opines Shigematsu. He worked closely on the CCTV building in Beijing, now he has given Quebec something very different, but something to be proud of - even if it’s not quite T-shirt material.