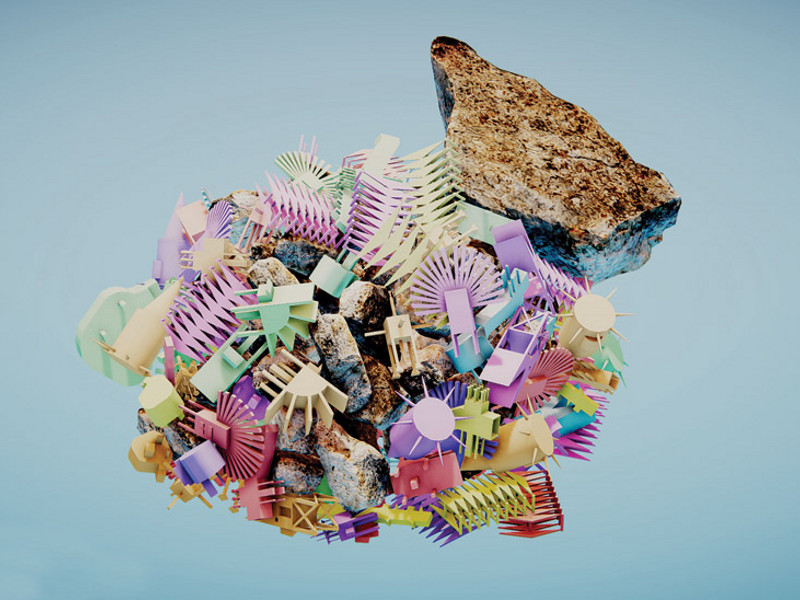 ‘Chance Encounters’ and ‘collaboration’ are buzz phrases in contemporary architecture. Modern workplaces epitomise this, with open-plan zones and stairs wide enough to hold impromptu meetings on.

In wider culture, similar expressions include ‘sharing’, ‘connecting’, ‘reaching out’ and ‘community’. And woe betide anyone who doesn’t let their Facebook, Twitter and Instagram followers know about their latest holiday/meal/thought. The author Dave Eggers took this practice to extremes in his 2013 dystopian novel The Circle. One character comes to the conclusion that ‘privacy is theft’ because selfishly keeping things to oneself deprives others of a vicarious experience.

In a sleepy, handsome town an hour’s train ride south of Paris, a parallel train of thought is being explored. Years of Solitude is the theme of the second edition of the Biennale d’Architecture d’Orléans. Think of it as a guide to deconstructing and reconsidering the notion of solitude through architectural collections (the FRAC Centre-Val de Loire in Orléans, one of the venues for the event, claims to have one of the three most important collections of architecture in the world) and recent artistic creations. In this age of sociability – strong social relationships have been found to contribute to our longevity, after all – the notion of solitude sounds a bit, well… negative. The previous biennale’s theme had been less glumsounding: Walking in Another’s Dream.

But Abdelkader Damani, director of Orléans’ FRAC and biennale co-curator, has a different take. The theme, he explains, is a reference to Gabriel García Márquez’s 1967 classic novel One Hundred Years of Solitude. ‘The book is about urbanism and architecture and how to build a space where we can live together,’ he says.

‘Solitude is one of the most important things we have in our life,’ he continues. ‘Without solitude we have no more possibility to think, to create. But solitude is also a nightmare because capitalism insists that people are together all the time. But that “togetherness” is fake.

‘We are living at a time where the most horrible thing that can happen to you is to be alone. Capitalism is based on this. Capitalism wants us to connect and to consume together. We are losing our privacy.’

He points out that solitude is different from loneliness or isolation – two states that modern governments and modern medicine warn against. So the biennale attempts to pose two questions: how can you be free if you don’t accept your solitude? And how can architects design architecture in a way that people don’t suffer from loneliness? Whether all the biennale’s visitors – more than 2017’s 40,000 are expected – will pick up on these questions seems unlikely, although even if they don’t there’s still plenty to get out of the myriad installations and exhibitions on show around Joan of Arc’s old stamping ground.

Visitors’ first visual manifestation of the theme is likely to be in the foyer of the FRAC Centre. Spanish architecture duo Takk have created Crxnolxne, a large old-fashioned skirtlike structure made of insulation foam. The piece is structured around one of the chimney-cum-windows of FRAC’s 2013 Les Turbulences extension by Jacob + McFarlane. ‘The chimney is supported by nine pillars, and we created a seating space for solitude around each pillar,’ explains Takk’s Mireia Luzárraga while wearing a pink tutu, in deference, perhaps, to her installation.

Significant and lesser-known figures from the 20th century, including the German Günter Günschel, have been paired with recent pieces by the likes of Ila Bêka & Louise Lemoine, Santiago Borja, Lacaton & Vassal, Laure Tixier and Hervé Rousseau, and Beniamino Servino.

The flavour is international and the leaning is to the left politically. Arquitetura Nova (AN) – the biennale’s guest of honour – epitomises this. The Brazilian collective resisted the country’s dictatorship. ‘I began to work in translating Marxist theories into architecture. We studied architecture from the point of view of exploitation and suffering,’ says AN co-founder Sérgio Ferre, whose presentation in the Saint-Pierre-le-Puellier Collegiate Church garnered a round of applause. For its exhibition Dreams Seen Up Close there are blown-up black-and-white photos of the Série Congresso Nacional in Brasilia, taken by Marcel Gautherot from 1958 to 1960 and featuring construction workers scrambling unaided and unprotected on its dome. AN’s sentiments are echoed in and complemented by models and images from Usina_CTAH, a Brazilian NGO of architects who teach favela dwellers – mostly women – construction methods. Usina_CTAH has trained 7,000 families in 30 years, and is now building a total of 1,100 housing units across three sites in Sao Pãulo, plus another 300 in the north-east of the country.

The work of Italian-born Brazilian modernist Lina Bo Bardi can be found at the Mediatheque d’Orléans. Her presence is justified because of the ‘solitude of a woman architect working in a masculine environment … in a political context where expressing one’s convictions entailed both social and professional marginalisation’. Some of her artistic and architectural ideas, which focused on Brazilian vernacular design, are displayed in miniature in enclosed boxes with peepholes.

Back at FRAC, social motivation is a strong theme on the second floor. To get there, visitors pass the Battle of Algiers, the 1966 film about the end of French colonialism and the beginning of freedom, being projected onto the stairwell. This sets the scene for France’s Fernand Pouillon, the architect of a key building in the film.

Pouillon lived and designed in Algiers for two decades, and is described by curator Pierre Frey as one of the four most important architects of the 20th century, alongside Le Corbusier, Ludwig Mies van der Rohe and Louis Kahn. This might be stretching it, but his story is still worth knowing. Having been imprisoned in France and eventually pardoned, he was commissioned by the Algerian captital’s mayor to build lots of housing in order to avoid a civil war, according to Frey. One of his most important is the Climat de France, a development for 40,000 residents.

Images of his buildings are accompanied by recent photos and short films by filmmaker and photographer Daphné Bengoa. ‘I entered Pouillon’s housing to do interviews to find out how users re-appropriated spaces and how they have grown in communal spaces like stairs. How do you build conditions for people to live together?’ she asks, pointing out that French social housing comprised two or three rooms, and yet Algerian families had six to 10 children, which echoes Abdelkader Damani’s own experiences of growing up in Algeria. Like all city-wide, multi-venue events, this one demands time and effort from its audience. If 2019’s theme seems to take a lot of unpacking, the organisers have made some concessions to the general public. ‘This year, there’s more text and more (architectural) models,’ says Damani’s co-curator Luca Galofaro.

Finally, for a single fix of solitude writ large, there’s a 30-minute film, also on show in the Saint-Pierre-Le-Puellier Collegiate Church, called Butohouse, which features a single-minded citizen building his own crazy concrete house in Tokyo, entirely by hand. Mostly shot in silence, the camera lingers on the builder, whose methodical techniques resemble performance art. A more absorbing yet direct manifestation of Years of Solitude would be hard to find.