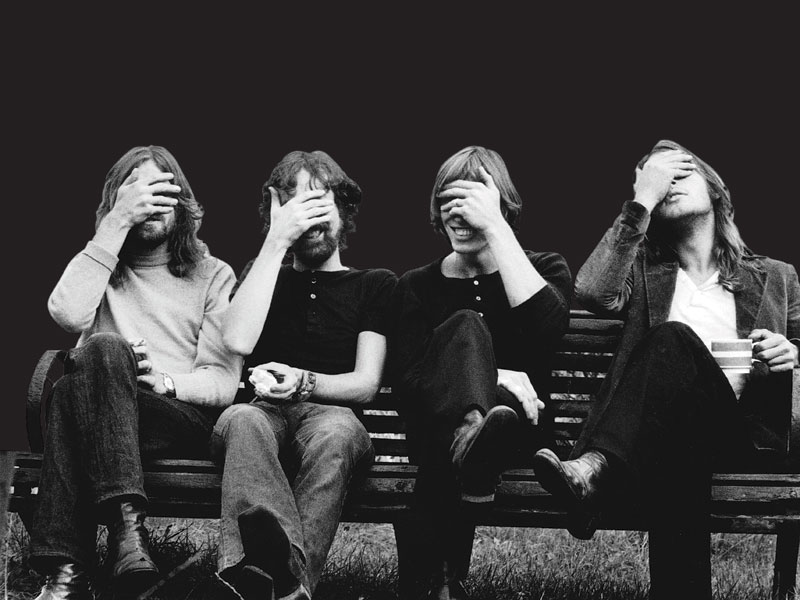 In the Pink - Pink Floyd is the latest subject for a V&A blockbuster exhibition. Before the opening, we caught up with the event’s creative director, Aubrey ‘Po’ Powell, one half of legendary graphic design outfit Hipgnosis, show designers Stufish and one of Pink Floyd...

‘Nick Mason is a failed architect after all…’ says Ray Winkler, CEO of entertainment architect Stufish, with a twinkle in his eye and his tongue in his cheek.

Oh to have that kind of failure. In case he needs an introduction, Mason is the drummer and one quarter (now one half ), of Pink Floyd, one of the biggest music acts of all time. To give you a little perspective, the band’s 1973 Dark Side of the Moon album is one of the top three best-selling records of all time, having shifted in excess of 40 million copies and to this day still sells around 10,000 each week. And that’s just one — if an exceptional one — among an output that has seen 15 studio album releases; Pink Floyd continues to sell more than a million units a year. On balance, it may have been a good decision by Mason to give up his architecture studies. Along the way it has been a rollercoaster ride from the hard-working, low-selling band criss-crossing the country in a black Bedford van, through losing lead singer/songwriter and driving force Syd Barrett to drug-induced psychosis, to carrying on with new member David Gilmour and entering a phase that would rocket Pink Floyd to superstardom. It also saw a growing alienation within the band, culminating in Roger Waters’ highly personal project, The Wall, with live performances that saw the band playing behind said wall as it grew higher and higher. An early Stufish sketch for the entrance to the exhibition shows the Bedford van — the final design evolved from this point. Image Credit: Stufish

The wall eventually comes tumbling down and so did the band. Keyboard player Richard Wright was fired and there was just one more album with Roger Waters — ominously titled The Final Cut. Waters subsequently left the band and tried to stop the others using the name. Following increasingly acrimonious public spats and legal battles, Pink Floyd did eventually carry on with just Nick Mason and David Gilmour (bringing back Wright on a contract basis) and produced three more albums, starting with the again tellingly titled Momentary Lapse of Reason and ending three years ago with The Endless River. Richard Wright died between the penultimate and final releases. Drummer Nick Mason loads up the Bedford van with its unusual paint job, in which the band criss-crossed the country building up a following. Image Credit: Pink Floyd Archive

So why am I telling you all this? Because this is the story that is now being extravagantly told at London’s Victoria & Albert Museum in the show Their Mortal Remains that runs until 1 October. ‘I wouldn’t say it’s an extravaganza in the way of Cirque du Soleil or Disneyworld,’ says show creative director Aubrey ‘Po’ Powell. ‘It’s definitely warts ’n’ all. However, we wanted to make it on a grand scale because there is such a history — of I suppose, surreal art — that goes with Pink Floyd; we wanted certain objects in it that demonstrated Pink Floyd’s dedication to creating art works that went along with their music. So this is a concentration on some big objects, and also some very small objects that have a lot of meaning. A Roger Waters’ sketch from 1978 of the overbearing teacher shows a size ratio that was to be maintained when it came to realising the tour. Image Credit: Roger Waters 1978

It’s not sensational — in that sense, it’s quite serious. That said, hopefully people will go “wow” when they go in, in the same way they did when they saw a Pink Floyd concert.’

Powell, known to most as Po, also happens to be one half of the legendary Hipgnosis graphics studio, which he formed with Storm Thorgerson, who was at school with founding Floyd members Roger Waters and Syd Barrett. Hipgnosis was the creative force behind myriad, extremely well-known album covers for the likes of Led Zeppelin, Peter Gabriel, Genesis, T. Rex, AC/DC, Black Sabbath and Hawkwind. It was also the visual powerhouse behind Pink Floyd, responsible for all the covers, including of course the prism on Dark Side of the Moon, the burning man on Wish You Were Here (see p74), the floating pig above Battersea Power Station for Animals and the curious cow on Atom Heart Mother (all of which incidentally didn’t feature the band’s name or album title on the cover). Powell has been a driving force in getting this V&A show on the road as it were — it is likely to tour the world once it finishes in London. There has been a longish gestation, with a few stops and starts along the way, but not very long ago Powell decided to approach the V&A: ‘I said: “You’ve had such success with David Bowie in the music world, what’s your next project?” and they said, “Well funnily you should be here, because top of our list is Pink Floyd. We have an exhibition waiting in the wings. Are you interested?” So we went to see Martin Roth, who was then the museum’s director, and he is such a Pink Floyd fan. He said: “This has to happen. Can you do it in 18 months?”, which was a very tall order as normally these things take about three years. Shot from an original performance of The Wall in 1980. The Wall was designed by Mark Fisher, whose company Stufish has designed the V&A show. Image Credit: Stufish

‘I then started putting the architectural team together and I wanted to work with architects who understood rock ‘n’ roll as well as what it required for building a show like this. Stufish were the obvious answer, having worked on The Wall with Roger and earlier on the Division Bell tour.’

Powell and Stufish has to be a design dream team for this exhibition. Stufish, was originally founded by architect Mark Fisher, who worked with Floyd creating inflatables for the Animals tour, then subsequently designing the physical wall for the tour of the The Wall album. In 2010, Waters took The Wall out on tour again for three years. In 2011, I asked Fisher, who has since died, how the new wall differed from the original. Rendering for the exhibition showing The Wall section complete with gigantic teacher. Elements of the show reach up to 10m high. Image Credit: Stufish

He replied succinctly: ‘Not much, we just got the old plans out for the bricks, but the projectors are much better these days!’ Stufish has an enviable record of creating massive architectural stage sets for the biggest artists including the Rolling Stones, Madonna and Robbie Williams, and is currently working on one for Take That and the 30th anniversary of U2’s The Joshua Tree. Winkler agrees with Powell that knowing rock ‘n’ roll is important. But it’s not all about grand gestures. ‘Exhibition design is something that is extraordinary in its appetite for detail,’ says Winkler, ‘especially when you are working with a band like Pink Floyd, where you have such a great visual catalogue of all this work — you really want to do it justice.

The Massed Gadgets of Auximenies poster for a Royal Festival Hall performance, designed in 1969 by Hipgnosis. Image Credit: Victoria and Albert Museum, London

‘We didn’t want to create a bland box that objects sit in. It would have been far easier, but the fun in all of this was to really milk the visual language that Pink Floyd has created and that is such a part of our cultural heritage now. And Po’s experience and exposure to and time with the band has been invaluable in amalgamating the cacophony of objects and ideas that were floating around into this coherent proposition.’ The Azimuth Coordinator — as advertised on the Royal Festival Hall poster — was a device that allowed the sound to be panned around up to six speakers surrounding the audience. Image Credit: Pink Floyd Music

The starting point for the show is the old black Bedford van in which Pink Floyd toured — that takes you to the Sixties: ‘The Bedford van entrance is a metaphorical rabbit hole that drops you into the psychedelic-chamber starting point. So you enter through this post-war, austere, black-and-white environment into the incredible colour world of psychedelia, which is of course where they began.’ What follows is a chronological journey through key moments in the band’s history brought to life by Stufish, with exhibition design that at times reaches up to 10m high and includes the giant inflatable ‘Teacher’ puppet from The Wall live show. On a more intimate scale there are objects such as the school corporal punishment log book with the names of Waters, Barrett and Thorgerson in it and the cane used by the teacher, who no doubt formed part of the inspiration for the enormous puppet. There’s also a touching handwritten note from David Gilmour in which he tells his mother that he has joined a band called Pink Floyd — but that she shouldn’t worry. Looking across the lake to the Han Show Theatre, in Wuhan, China, designed by Stufish for the Dalian Wanda Group in 2014. Image Credit: Stufish

In all there are some 600 objects in the show, and bringing them together has been a very personal process for Powell, who was close to the band from the very start: ‘It’s been very emotional for more than one reason, especially since some people are not here anymore, in particular Syd Barrett. We were very close, we were like brothers. All those memories come flooding back, Rick Wright, of course and then Storm [died in 2013], because he and I were partners for so many years and were very close. A lot of things reared their heads and I became nostalgic and quite sad — particularly when you see something like people’s handwriting or little drawings, you’re suddenly reminded you were surrounded by real people who really had a lot of talent. But at the same time this is a celebration of Pink Floyd and my own work as well.’

And if the David Bowie exhibition is anything to go by, it’s a celebration that is likely to be seen by hundreds of thousands of people worldwide. ‘I went to the David Bowie exhibition,’ says the laconic and droll Nick Mason, ‘and it was excellent and I didn’t think we could match that! I started wondering what costumes we had… We didn’t have many! Still there’s a cane and a Bedford van in the show — what a day out!’

And just to conclude the story, Nick Mason finally received his degree in architecture in 2012 — an honorary one from Westminster University (formerly Regent Street Polytechnic), where he had originally studied, before Pink Floyd got in the way.

The Pink Floyd exhibition: Their Mortal Remains is on at the V&A until 1 October 2017