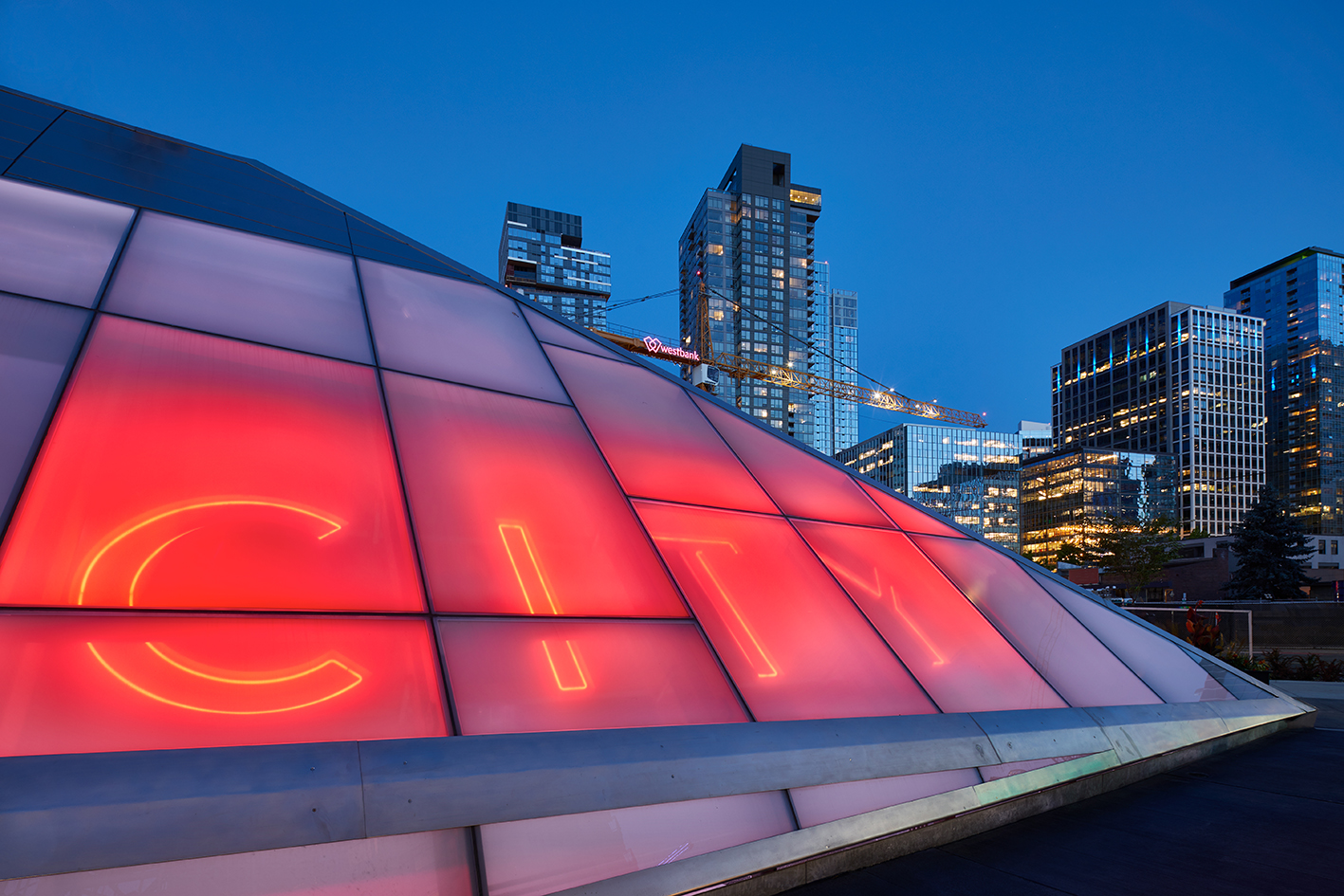 From sewage works to power plants, more public works projects are harnessing architecture and civic presence to elevate the typology — and better engage people with the vital infrastructure that sustains daily life

The opening in April 1865 of the Crossness Pumping Station, a sewage processing plant on the south-east edge of London, was a surprisingly fancy affair. An etching of the event published in the Illustrated London News depicted a gathering of besuited and top-hatted dignitaries, the Prince of Wales among them, beneath an arched colonnade decked out with what appear to be Industrial Revolution-edition fairy lights. The gathered company was witnessing the newest addition to London’s landscape of ornate infrastructural marvels, masterminded by civil engineer Joseph William Bazalgette and his architect Charles Driver, as part of the development of the city’s sewage system. With its spiralling balustrades and Romanesque windows, Crossness was described by architectural historian Nikolaus Pevsner as a ‘Victorian cathedral of ironwork’. The opening of Crossness Pumping Station in 1865, as depicted in the Illustrated London News

The close proximity of these VIPs and such fine design with the city’s waste would have been unthinkable a few years previously, when sewage still flowed freely through the Thames in central London causing the Great Stink of summer 1858. But Bazalgette’s design and engineering works established a new relationship between Londoners and their waste, with proudly visible public works that kept sewage (and its stench) under control.

Over 150 years later, the Bazalgette pumping stations continue to draw visitors (albeit with fewer top hats) and a new wave of public works projects is bringing citizens ever closer to the infrastructural facilities that serve them. Take Bjarke Ingels Group’s CopenHill project, a waste-to-energy plant which opened on the outskirts of Copenhagen in October 2019. As well as producing energy for the city, the facility’s roof doubles as a leisure space with a dry ski slope and landscaped areas for walking. This conflation of public works and urban social life is becoming increasingly common. For example, a 50-minute train ride north of Copenhagen on the edge of the town of Hillerød, the Soldrødgård Climate and Environment Park — designed by Henning Larsen — features a recycling and wastewater treatment plant (opened in 2017) marked by a corten steel facade, alongside 50ha of landscaped public parkland completed in 2019. The Soldrødgård Climate and Environment Park in Denmark, designed by Henning Larsen. Image credit: Jacob Due

‘We wanted to have an open place where people could find joy in the surrounding nature,’ explains Peter Underlin from the municipal water company that commissioned the project. The park envelopes the plant within its undulating landscape; walkways take visitors on to the facility’s green roof where skylights reveal the machinery inside, processing 15,000 cubic metres of wastewater per day. For now, the park is fairly isolated — bordered by motorways on two sides of its triangular plot — so mostly serves local joggers and dog-walkers. But Hillerød is growing and Underlin sees the project becoming gradually incorporated into the townscape in the years to come. In the US, other examples of blended social and material infrastructure are nestling into more densely urban contexts. One is the Denny Substation by NBBJ Design for the publicly owned electric power utility Seattle City Light. The project is located in the city’s South Lake Union neighbourhood, a former industrial area now home to the Amazon headquarters and regional offices of other tech giants. Following its opening in summer 2019, the substation provides power to these energy-intensive neighbours, as well as local residents, from its 900 sq m footprint. Alongside these technical functions, the glass and steel facility — which looks more like a high-tech cultural centre than an energy facility — features community meeting spaces, rising walkways with views to the Seattle skyline and, crucially, a dog park. Meanwhile in New York, a Combined Sewer Overflow (CSO) facility on the Gowanus Canal, designed by Selldorf Architects with DLAND Studio, will include a 0.65ha public space beside its sewage processing tanks and headhouse when it is completed in 2028. ‘As you can imagine, not everyone is excited about having a huge piece of wastewater infrastructure in their neighbourhood,’ says Alicia West from the New York Department of Environmental Protection. ‘There’s no way to hide our facility in this dense urban neighbourhood, so we chose to celebrate it through design.’ Project visuals show a squat rectilinear building characterised by terracotta louvres that echo the tones of nearby brick apartment blocks. Attached to the building’s side, a proposed pocket park provides views on to the canal and areas for sitting among light landscaping. The strengths of these projects seem to be in their public accessibility and civic presence, alongside a sense of neighbourhood scale and some nice design details. Yet more than simply providing efficient use of urban land, the embedding of these infrastructural projects in the public lives of their respective locales comes at a pertinent ecological time. As we attempt to rethink our societal relationships with natural resources in the context of the climate crisis, what role might these public-facing projects have on their socio-ecological surroundings? CopenHill, for instance, as well as providing an active social space, is a project with communicative features befitting its chatty creator. The project has been framed as an urban mountain in a notoriously flat city, making explicit the desire for the building and its sustainable-energy function to be unmissable on the harbour horizon. The essence of the power plant/recreation centre is in its conspicuity: ‘A blatant architectural expression of something that would otherwise have remained invisible,’ as Ingels himself put it.

Henning Larsen and the Hillerød municipality made similar efforts to draw public attention to the inside of the Soldrødgård plant. As well as blending stylishly with the surrounding landscaping, the building opens ‘the mystery of the facility’s inner workings’, says Salka Kudsk of Henning Larsen. For Peter Underlin, the changing climate means more local people need to be educated in water management, particularly to deal with flooding. The project includes a teaching place for the public ‘to see how we are treating rainwater’, he says. And back in Seattle, on one corner of the Denny Substation, a curtain wall draws visitors in beneath the words: ‘The Future of Power Starts Here’. Elsewhere, strategically placed windows reveal the technical machinery inside. According to NBBJ, these moments of infrastructural celebration are meant to ‘educate the public about the production and importance of energy and power and its role in their lives’.

The emphasis on education across these projects does seem a little heavy-handed, especially in the context of mainstream discourse on the climate crisis that still leans on notions of individual responsibility despite widespread protests calling for broader systemic change. The idea that the Denny Substation or Soldrødgård Climate and Environment Park might change the behaviour of individual citizens, as is implied in their promotional materials, seems like the architectural equivalent of the plastic straws debate. Visitors are invited inside to learn about the importance of energy and power. Image credit: Benjamin Benschneider

Nonetheless, buildings as cultural artefacts make manifest the functions and priorities of a society. The towers of Canary Wharf speak to the accumulation of capital, while the church spires that preceded them at the apex of the London skyline point to their heavenly patron. Similarly, Bazalgette’s decorative pumping stations made visible the workings of the otherwise hidden infrastructure processing London’s waste.

So instead of symbolising individual citizen guilt, we might consider these conspicuous structures as visual reminders to public servants of the responsibilities they owe to their citizens, in the same way that historic civic architecture — town halls, court houses, public squares, monuments — have symbolised the ongoing struggles for democratic balances of power. The ‘sugar cube’, a vent shaft and substation by Weston Williamson and William Matthews Associates for Euston’s HS2 station

With this in mind, other neo-Bazalgette infrastructural projects, which don’t necessarily allow for public access, but still exude a contemporary monumentality and visibility, might serve a similar purpose. The ‘sugar cube’, for example, is a vent shaft and substation designed by Weston Williamson and William Matthews Associates for the forthcoming Euston HS2 station whose expressive design is directly inspired by the celebration of detail and materiality in Victorian infrastructure projects.

The cube’s nickname is derived from its glazed ivory-white tiles which, in addition to their practical utility, were chosen in a nod to the tiled facades of historic London Underground stations. It is striking that these references and generous details are being discussed in the design of what is essentially a modern chimney stack. ‘Quite often these elements are popping up within the existing fabric of the city,’ says Philip Breese of Weston Williamson. ‘So they should be treated with an architectural language and elegance, and embraced as part of the city.’ The concrete structure was designed for the NYC Department of Sanitation

These bombastic shapes are totally unnecessary for buildings which could easily fulfil their purpose within utilitarian containers, as with most of the infrastructural facilities built over the last century or so. But there’s something endearing, even thrilling, about dressing these essential public facilities in an expressive language usually reserved for displays of private wealth or big-budget cultural institutions.

It is notable that the development of these more visible facilities for energy and material infrastructure has occurred in parallel with the ongoing and rapid development of our newest and most pervasive forms of infrastructure; those of computer systems. The data centres and server farms that uphold the networks at the heart of 21st-century societies are conspicuous in their absence from our everyday lives. Located in predominantly rural sites — Microsoft is even developing underwater data centres — these are structures whose anonymity is underpinned by their machineorientated design. One consequence of this physical separation is the erroneous reinforcement of a psychological one: the sense that these networks are intangible or nebulous, and thus so is their environmental impact. On the contrary, a report by Climate Home News in 2018 suggested that global emissions from information and communication technology would surpass those of aviation and shipping in 2020. What’s more, unlike other infrastructural processes such as waste management or energy production that are run by public bodies, or at least for the public good, the organisations running computer and data networks are private companies whose priorities are profit-orientated at best.

The turn towards more accessible and visible forms of infrastructure via expressive architecture and new public spaces is a welcome development that may yet evolve from individual case studies to a more widespread quotidian engagement with energy flows and material resources. Yet more than this, the civic-minded design that flows from Bazalgette’s sewage pumps through to the Spring Street Salt Shed could be extended such that the flows of data defining our lives today might be harnessed for the planetary and public life that they otherwise threaten.