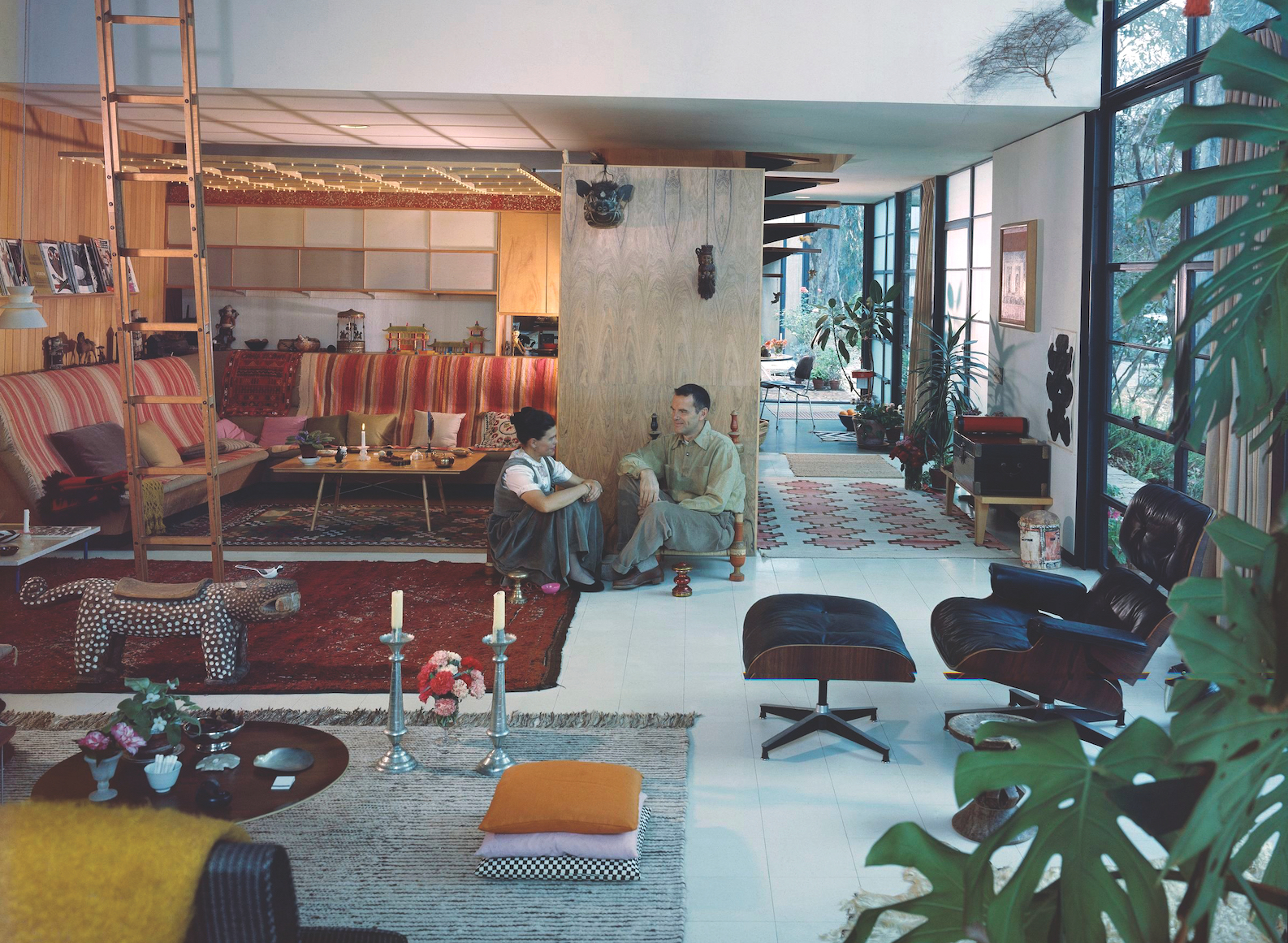 In order to save Charles and Ray Eames’ iconic home in California’s Pacific Palisades, Charles’ granddaughter Lucia Dewey Atwood has launched a long-term conservation project for the modernist monument in which she spent much of her childhood. But preservation does not mean a sealed museum, she insists

As a blueprint for homes that could be built fast and economically to meet surging post-war need, Charles and Ray Eames’s house in Los Angeles (1949) — named Case Study House No 8 and erected in just two days using materials ordered from catalogues — was a triumph of innovation. As a playroom for visiting family children, it was also a veritable Aladdin’s Cave. But when Charles Eames’s granddaughter, Lucia Dewey Atwood, later moved into the house where the couple spent their lives, defects threatening the future of one of the most aesthetically beautiful as well as historically important homes in California became all too apparent.

‘My mother for years had the house cared for the way Charles and Ray had — and that only worked for a period of time,’ explains Atwood, director of the ambitious and eye-wateringly expensive 250 Year Project for the landmark which has inspired architects from Richard Rogers to Renzo Piano. We gaze at worn parquet, discoloured rubber tiles and steel verticals in constant need of repainting to protect from them salt spray. The house may have been quick to put up and a joy to live in, but it was high-maintenance, and the family eventually had to call in experts for advice on how to save the fabric of the national treasure they inherited: ‘You might be so focused on a window repair caused by storm damage from a leaky roof that you forget to look at the relationship between the floor level and the outside space,’ Atwood says. ‘It’s those little things that matter when we try to stay true to Charles and Ray’s vision, and how the house was when they used it.’ Ray and Charles Eames pose on the construction site of the house in 1949. Image credit: © Eames Office LLC (www.eamesoffice.com). All rights reserved

A grand rescue plan harnessing new conservation techniques to make long-lasting but unobtrusive repairs has now been devised with the help of the Getty Conservation Institute, which has documented every aspect of the house and site and the most urgent areas needing remedial action.

‘The idea is that the great-great-great-grandchildren of today’s visitors will have the same experience as those who come today,’ says Atwood hopefully, admitting a multi-generational passion for staying true to the traces of Charles and Ray’s lifestyle, however damaging, while preserving the fabric of the house. Like the corner accommodating a planter whose greenery Ray once spritzed daily, inevitably causing water spots. Atwood fought proposals to clean them off — ‘They’re part of the traces of how the house was lived in and experienced,’ she says fiercely, citing the permanent presence of fresh flowers as another example — but she was relieved when the Getty’s ‘wood whisperer’ confirmed the spots were not harmful to leave in place and found a reconditioning finish with an invisible UV protector to extend its life. The collaboration between curator and conservators was kickstarted when the most visible problems — water damage and corrosion to the steel frame of the house — became apparent less than a decade ago, at which point the family recognised it needed to start making urgent interventions. What this might presage for the future sent shivers through Atwood at a time when she had a day job and was visiting only occasionally. ‘I started to struggle with how we were going to fix things when it was not simply putting a coat of polish or a dab of paint on,’ she says.

Professional conservators came into the picture when the Los Angeles County Museum of Art asked for the loan of the entire contents of the double-height living room, comprising 3,000 eclectic objects as well as furniture and textiles, for a Getty-sponsored exhibition in 2011. It was a godsend of a request at a time when the need to repair cracked flooring containing asbestos had become urgent. Atwood consulted with Getty conservators, feeling their world-class expertise chimed with Charles and Ray’s own forensic investigation of the house and the stuff they put into it. ‘They deeply explored all of their chairs, having multiple people come and sit on them, and before they built the house they spent months watching how the sun moved across the site,’ she says. Not envisaged, however, was the way water would sheet down the walls, eventually causing separation between steel and glazing. Repairs needed to be done at a cost of nearly £500,000 before the contents of the main living space could safely be reinstalled. ‘And that was just the first phase,’ says Atwood. ‘But I didn’t want to continue until I had a plan.’ What was never going to be acceptable in the name of conservation, says Atwood, was ‘a museum-quality, hermetically sealed box, with no fresh living plants or flowers, no doors opening or shutting. That’s not what we wanted to do — we want to share the house with visitors the way Charles and Ray did. The Getty people listened, and understood we needed to be able to open windows and doors.’

The couple had perhaps been blinded by the beauty of the site in the affluent seaside neighbourhood of Pacific Palisades when deciding to build there. ‘We’re right next to the ocean, yet in a desert like the whole of the LA area,’ says Atwood. ‘We get the fog, the moisture and the salt, at the same time as the desert problems which impact the landscape; the concern is always to balance the temperature and the humidity.’ But there was no question of shying away from their precarious position on the edge of a cliff susceptible to mudslides; the couple went for it in spite of the problems the site threw up. ‘They wanted to be part of nature and the seasonality of the meadow they looked out on,’ says Atwood, pointing out an angle in the walls which forces a view of groundcover which veers dramatically from the dry leaves and bark of late summer and autumn to the lush grass which springs up in the wake of winter rains. The entire contents of the double-height living room were loaned to the Los Angeles County Museum of Art in 2011 for an exhibition. Image credit: Photo by Mitsuya Okumura © Eames Office LLC (www.eamesoffice.com). All rights reserved

Then there is the row of eucalyptus trees so integral to the frontage, standing like sentinels in front of glass panels framed in black steel and punctuated with primary colours, channelling Mondrian. After a couple of years more or less camping out on the site — ‘they picnicked, flew kites, did archery in a bid to thoroughly explore the space’, says Atwood — the couple abandoned the original 1945 plans Charles drew up with Eero Saarinen and created a new design preserving the beautiful blue gums they chose to site their house and studio behind, rather than tearing them down. ‘They found integration with nature so restorative after all the daily problems of their work,’ says Atwood, who saw this in practice as a child spending summers at the house.

‘Ray would get out of the car; she’d be exhausted, but would inhale deeply and become energised; it was beautiful to watch.’ Equanimity restored, Ray would stand in the paved central courtyard which connects the 140 sq m house with a smaller but matching two-storey studio to receive the young Lucia and her four siblings when they visited with Lucia senior, Charles’s daughter. ‘The guest-host relationship was so important to Ray and Charles — anticipating guests’ needs and making them feel as though you really wanted them to come,’ says Atwood. ‘You did that by having good food and not showing the mess of daily living.’ She points out a corrugated glass screen which conceals the utility area behind an eat-in kitchen where the food was assembled for never-ending meals of dishes rotated to guests by Ray when there were no surfaces to set them down on. The round table which could barely accommodate the extended family was always beautifully set with the tiny plates which were all that could be accommodated on overlapping place mats.

‘Ray and Charles felt strongly there should be no differentiation between entertaining and everyday living and would enjoy pulling out the differently coloured mats and glass and scattering small but exquisite bouquets around the table,’ recalls Atwood. ‘It was effortlessly done.’ The fact the main house had two bathrooms was considered shocking, says Atwood, but presaged the needs of working wives which led to the multi-bathroom home becoming the norm in America. ‘As Charles would say: “Ray is getting ready for work at the same time as I am,”’ recalls Atwood. There was also a bathroom in the studio, where the family slept when they descended for the summer.

After college, Atwood worked in the studio for a year and accompanied the couple to Mexico for their show there in 1977. A few years later, when she moved to Los Angeles to be a dance critic after Charles’s death, she took on inventorying duties for Ray, ‘and got to do flower arranging with her and see the house through her eyes; I fell in love with it,’ she says. Atwood moved in the day after Ray died in 1988 and stayed for a year as the family pondered their mission to save the house as Ray had requested. Currently, $10 tours of the exterior allow peeks through the windows into the ground-floor rooms. Photo by Mitsuya Okumura © Eames Office LLC (www.eamesoffice.com). All rights reserved

The conservation plan lays out $10m (£7.8m) worth of essential work, for which a fundraising effort is underway following the replaced flooring and urgent repairs which cost nearly £500,000. Water and gas, now no longer needed for a working kitchen, will be shut off to circumvent future damage, and efficient heating to ward off winter chill is being investigated. Separate conservation plans will be prepared for the landscaping and the objects — a joyous amalgam of toys, ceramics, shells, stones, folk art and found objects collected by the Eameses on their travels, some so delicate Atwood does not even dare lift them to dust, lest they fall and break — ‘and there are another 2,000 in the kitchen alone’, she says. Conserving the house as ‘a museum-quality, hermetically sealed box, with no fresh living plants or flowers’, was never going to be acceptable, according to Atwood. Photo by Mitsuya Okumura © Eames Office LLC (www.eamesoffice.com). All rights reserved

Yet it’s vital to continue to offer tours of the interior, however risky, even when limited to four or five visitors at a time, in order to raise the income necessary for repairs. Along with weddings and other events on the patio, and $10 (£7.80) tours of the exterior which allow just a peek through the windows into the ground-floor rooms, these interior visits are the only way to keep the house, described by Getty as ‘a place of international pilgrimage for architects and designers’ alive for visitors, and authentically share the Eames legacy, believes Atwood. The kitchen is home to 2000 objects, all of which will face their own conservation plan. Photo by Leslie Schwartz © Eames Office LLC (www.eamesoffice.com). All rights reserved

‘My hope is that people will get a sense of how Charles and Ray approached their living and working, get inspired and take something away from it that makes their life better,’ she says, adding: ‘We’re not looking for quick fixes. This is a 250-year project, after all.’

This article was originally published in Blueprint issue 368. Subscribe to Blueprint here