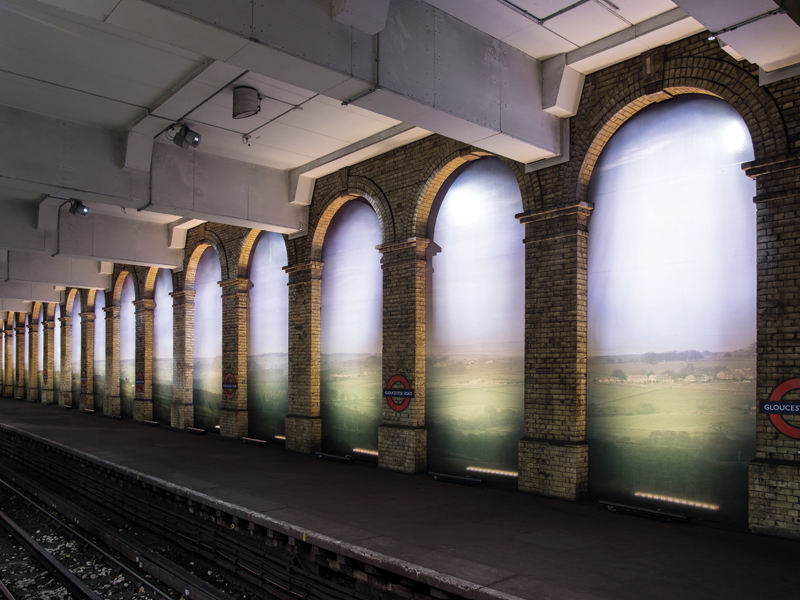 In honour of the suffrage centenary, Art on the Underground’s 2018 programme focuses solely on female artists, bringing creativity and feminism to London’s public transport network

We often think about how public transport systems can be improved in terms of functionality, capacity, efficiency and accessibility — but what about how the cultural or psychological experience of travelling on such networks can be enhanced?

It is exactly this idea that led to the creation of Transport for London’s Art on the Underground programme (then called Platform for Art) in 2000, commissioning and installing contemporary artworks on the London Underground network both to enrich the experience of Tube users and staff, while also supporting London’s leading role in the contemporary art world. It certainly feels as if the programme’s presence has become more visible and diverse over the years — and this year seems to be its most ambitious yet.

To mark the centenary of the Representation of the People Act, the first piece of UK legislature enabling some women to vote, London’s mayor Sadiq Khan launched the 2018 campaign #BehindEveryGreatCity, celebrating the contributions women have made in making London a great city, and to support gender equality across the capital. Concurrently, Art on the Underground (AotU) decided to dedicate its entire year of programming to female artists to mark the suffrage centenery. ‘We felt the act of commissioning purely female artists had more impact than curating a programme about women,’ says curator Kiera Blakey. ‘It demonstrates progress. We’re an all-women team commissioning only female artists.’

That this feels such a radical move though demonstrates how far the art world still needs to go in the equal representation and celebration of women artists — statistics covering 2007– 2014 showed that of solo shows at major London art galleries, only 30% were female; a 2017 study conducted by the Freelands Foundation revealed that only 13% of the UK’s most popular public artworks created since 2000 are by women.

‘The spaces of our cities are not neutral, and neither is space afforded to public art,’ said head of AotU Eleanor Pinfield when launching this year’s programme. ‘We will use this series of commissions to reframe public space, to allow artists’ voices of diverse backgrounds and generations to underline the message that there is no single women’s voice in art — there are, however, many urgent voices that can challenge the city’s structures of male power.’

One of the leading projects of the year-long programme will be an 80m-long installation from British multimedia artist Heather Philllipson at the disused platform at Gloucester Road Station, in June (‘the most ambitious project the programme has ever delivered,’ comments Blakey). The west London station platform, disused since the Seventies, was the original location for AotU commissions when the programme began. It has seen installations from Brian Griffiths, Trevor Paglen, Cindy Sherman and Sarah Morris among others. This September a mural at Brixton Station by Nigerian-American artist Njideka Akunyili Crosby will be the first in a series of works at the station responding to the local area’s social history and current transformation. In November, there will also be a major photomontage work by British post-punk artist Linder unveiled on a billboard outside Southwark Station. Linder will also design a cover for the pocket Tube map, as will Geta Bratescu, Marie Jacotey and Jade Montserrat.

So why commission art for a public transport network, rather than, say, a gallery? ‘In a way, the city is our canvas,’ explains Blakey. ‘Millions of people use the Tube every day, which means we have the opportunity of giving the art unprecedented reach. That audience is the leading drive behind the work.’

Does it make a difference? A Blueprint straw poll proved positive, with one Tube traveller commenting: ‘The artworks genuinely lift my mood by getting me to stop thinking about the crush of people I’m in or how long it’s going to take me to get somewhere. They create a pause in an otherwise urgent environment and I’m grateful for that.’

Meanwhile, another of the programme’s projects responds to the anticipated arrival of two new Tube stations in south London. In January, artist and sociologist Nina Wakeford began a two-year residency in the transforming area of Nine Elms, which may have already welcomed the new US Embassy but doesn’t as yet have the Northern line extension so pivotal to the neighbourhood’s growth. Her work will engage with the local community and be inherently responsive and social in nature. She has already begun with in-depth local research and community-asset mapping.

As London’s population keeps increasing (an anticipated 10 million by 2030) and capacity on the Tube network will have to grow accordingly (with a new Tube design in the works), so the audience for AotU’s commissions will continue to expand. These millions of travellers can encounter some of the best of contemporary art just by getting on the Tube.