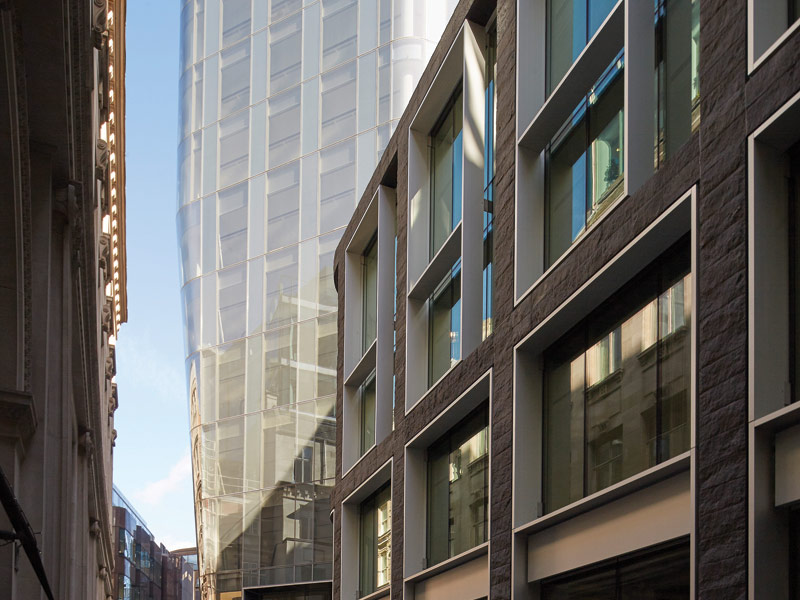 A series of garden terraces provide a unique viewpoint from which to view the City of London at the new 27-storey tower designed by Fletcher Priest. The project has also increased local public realm by a third

Words by Herbert Wright
All images by Edmund Sumner

Although the City of London’s restless skyscraper cluster continues to morph upwards, between St Paul’s and Tower 42, high-rise is prohibited. So a new 100m-high tower just a block from the Bank of England may come as a surprise — that is if you can see it at all. Its ethereal finish is one of several outstanding features of Angel Court, designed by Fletcher Priest and completed in February, along with substantial stone-clad volumes with garden terraces, which hug the tower on three sides and respond to the dense, traditional, urban context of the Bank Conservation Area.

The reason that Peter Rees, City planning officer until 2014, allowed the tower is because there was one there before. Designed by Fitzroy Robinson and completed in 1980, the 21-storey, 94m-high, octagonal-plan skyscraper and five storeys of offices around it were sheathed in purple Dakota marble and dark glass. Angel Court was once the London HQ of banker JPMorgan and took its name from the ancient alley it straddled. A separate, visible remnant of the old complex remains but is not part of the new development. The new Angel Court’s 27-storey tower reuses the old concrete core, and touches the ground in the revitalised passage, now wider and an oasis of calm in the City — public realm has been increased by a third. New sculptures by Sara Barker themed on textile work are mounted at either end, both referencing the Clothworkers’ Company, the ancient guild long based here. There is also 1,500 sq m of new retail in the lower volume, in four units let out to the likes of Natural Kitchen and Peruvian restaurant Coya.

The lower volumes are clad with Irish Carlow Blue limestone, guillotined into modules and presenting a rough, chunky exterior. However, with the large windows recessed in aluminium frames, the facades present more of a stone frame than a stone wall. Along Throgmorton Street, south-facing doubleheight window bays are topped with brise-soleils. The lower volume rises up to seven storeys, and between the northern site edge on Copthall Avenue and the tower, it extends out in a wedge.

The City didn’t want a dark tower, and Fletcher Priest didn’t want the green effect of normal glass like the nearby 125 Broad Street, another Seventies’ tower that GMW remodelled a decade ago. Camouflage was considered, and at one stage a picture of a pink Spitfire (which indeed effectively disappeared against clouds) suggested the notion of a pink tower. Instead, the tower has an all-round smooth skin with a laminate of four sheets of low-iron glass, screen-printed with 1mm dots, giving a 73 per cent average transparency for windows, and a double laminate over opaque sections. The whole tower is 60 per cent solid.

Like its predecessor, the tower’s plan is for an elongated octagon, but its corners are cylindrically rounded. The first seven stories gently incline outwards over the pedestrian space — here, its form and surface is not unlike the emerging Ian Simpson-designed One Blackfriars. Above level 7, the tower rises straight up after extending 1.5m further out on all sides.

Two levels under a perforated aluminium roof accommodate plant, which combined with passive convection cooling, earned Angel Court a BREEAM Excellent rating. With the larger tower floorplates and the lower volumes, it offers 32,500 sq m of floor, 60% more than before. Some 3,000 people will work here, and BUPA has already taken lower levels. The tower is entered through a gleaming 8m-high lobby. Two new 5m-high paintings by Simon Callery bring the only colour to the space. A first-floor balcony around the core, where workers can sip coffee, overlooks the doors. Escalators rise to this level, where the reception is, with a 9m-long, beam-shaped reception desk of Pietra Cardosa, a grey stone. Beyond it, a strip of plantings, including some tropical-looking ferns, grow between Angel Court and the brick walls of adjacent buildings — the first signs of the extraordinary landscaping by Günther Vogt, whose portfolio includes the Tate Modern extension.

The views from the tower are thrilling, particularly towards the veritable wall of taller skyscrapers and rising cores to the east. But lower down, the roof gardens offer views just as sublime. There are 1,600 sq m of terraces on different levels over the stone-clad volumes, including roof gardens — not quite as big as at Fletcher Priest’s riverside Nomura Building (2012) by Cannon Street, with allotments and beehives, but generous. Vogt’s concept at Angel Court was tall plantings.

Whole trees grow, helping create a sense of protection, and plant species were chosen to create habitats for rare birds such as redstarts. There are lawns and benches and the calm of an English garden, and yet all around are skyscrapers.