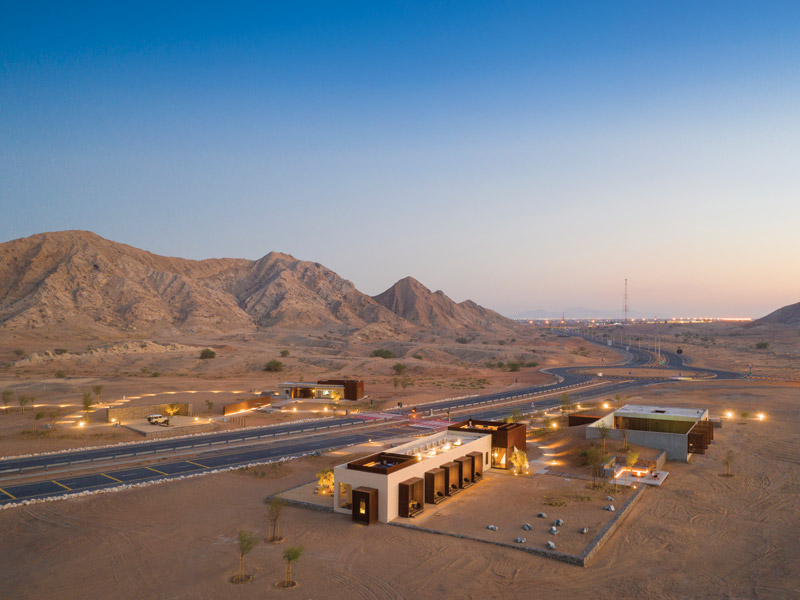 In the desert landscape of the Sharjah Emirate, a boutique hotel has emerged from the shells of two 1960s buildings As well as the heat, the buildings have to cope with ‘driving rain, sandstorms and low temperatures at night’

Located in the Sharjah desert in the UAE, at the base of Mount Alvaah in a picturesque landscape of red sand, new luxury boutique hotel Al Faya Lodge is something of a destination.

Two Sixties’ buildings – a former grocery store and medical centre – along an otherwise bare stretch of desert road have been transformed by London- and Dubai-based architecture practice ANARCHITECT. The scene is cinematic, and the buildings’ minimalist forms and raw materiality in the open space is reminiscent of the art of Richard Serra, James Turrell, and the Land Art movement, as well as desert architecture – just some of the inspirations Jonathan Ashmore, ANARCHITECT’s founder and director, mentions.

On-site amenities include a swimming pool

He says that ‘destination architecture’ is something his practice has been exploring over a number of projects. What Ashmore means by destination architecture is something more than places for Instagram fodder; it is about using architecture to open new locations to people, inviting them somewhere they might know very little about and are unlikely to otherwise visit. Al Faya Lodge is a striking example. In this case, Ashmore explains that Sharjah is perhaps one of the less globally wellknown Emirates – more understated than the international Dubai or the administrative capital of Abu Dhabi. The creation of shaded external areas was of huge importance

The site itself offers a particular point of interest, as it was the home of the very first petrol pump in the UAE. The former grocery store and medical centre were constructed in the following period of the oil rush, with the medical centre coinciding with the introduction of vaccinations in the era, as Ashmore explains. Both were built in the architectural vernacular of the time: single-storey modernist structures with crittall windows.

The buildings had been unused for many years and were almost entirely derelict. As a result, although ANARCHITECT was able to retain 100 per cent of the infrastructure, specific original features were badly damaged, some of which the practice chose to recreate. The neglect meant that the insertion of a secondary steel structure within the walls was necessary to allow the architects to add roof terraces onto the existing buildings, making the most of the spectacular desert views. In the middle of the spa is a small open-air courtyard, a secluded place for a quiet read

With the location comes adverse weather conditions, including, as Ashmore explains, ‘driving rain, sandstorms and low temperatures at night’. The buildings were already on a north-south axis to minimise the effects of the sun, and had significant thermal mass and small windows to counter temperature fluctuations, but raising terraces from the ground level helped to significantly reduce the amount of sand and dust entering the buildings, while creating shaded external areas was of huge importance too. Corten steel was chosen for its raw elemental qualities and red hue, similar to that of the desert sand

Ashmore ‘re-pitched’ the design to the client to include a new, additional saltwater spa alongside the existing buildings. The spa facilities add to the other amenities on-site, including a swimming pool, private dining rooms, communal spaces, and a restaurant, which is open to the public. The private lodge has just five rooms, suitable for groups of friends or parties of extended families.

For the bedrooms, ANARCHITECT built window shades cornered on three sides so that sunlight only entered the rooms late in the day, keeping them cool as well as affording extra privacy. These and other architectural additions were built in Corten steel, a material chosen for its raw, elemental qualities as well as its red hue, which picks up on that of the desert sand, which is high in iron content. The Corten forms a sharp contrast to the hand-rendered surfaces of the Sixties’ buildings. Inside, instead of Corten, a surface of similar colour and appearance is achieved with large slabs of Laminam porcelain, and as the local limestone of the mountain was unsuitable for the flooring, Travertine, more hardwearing but similar in appearance, was used instead.

ANARCHITECT’s brief also extended to the furniture, and Ashmore used the L-shaped structure in the architecture as a base for sofas, sofa chairs, dining tables, and credenzas. Ashmore has been located in Dubai for a decade now and explains that ‘staycations’ within the Emirates are popular. This boutique hotel, with its historical relevance and unique location would be a worthy candidate for such a holiday. Elsewhere, other signs of Sharjah culture coming to international attention included the first-ever Sharjah Triennale, taking place in November 2019, curated by Dr Adrian Lahoud, dean of the school of architecture at London’s Royal College of Art.

ANARCHITECT hoped to create a ‘pure’ and ‘serene’ place, complementing the lodge’s remote location and landscape with features such as skylights in all the bedrooms to allow the guests to take in the skyscape. For those living in the vastly different yet nearby bustle of Dubai, Sharjah offers a return to the region’s desert landscape, although it is hoped that destination architecture such as this will also entice people from further afield.