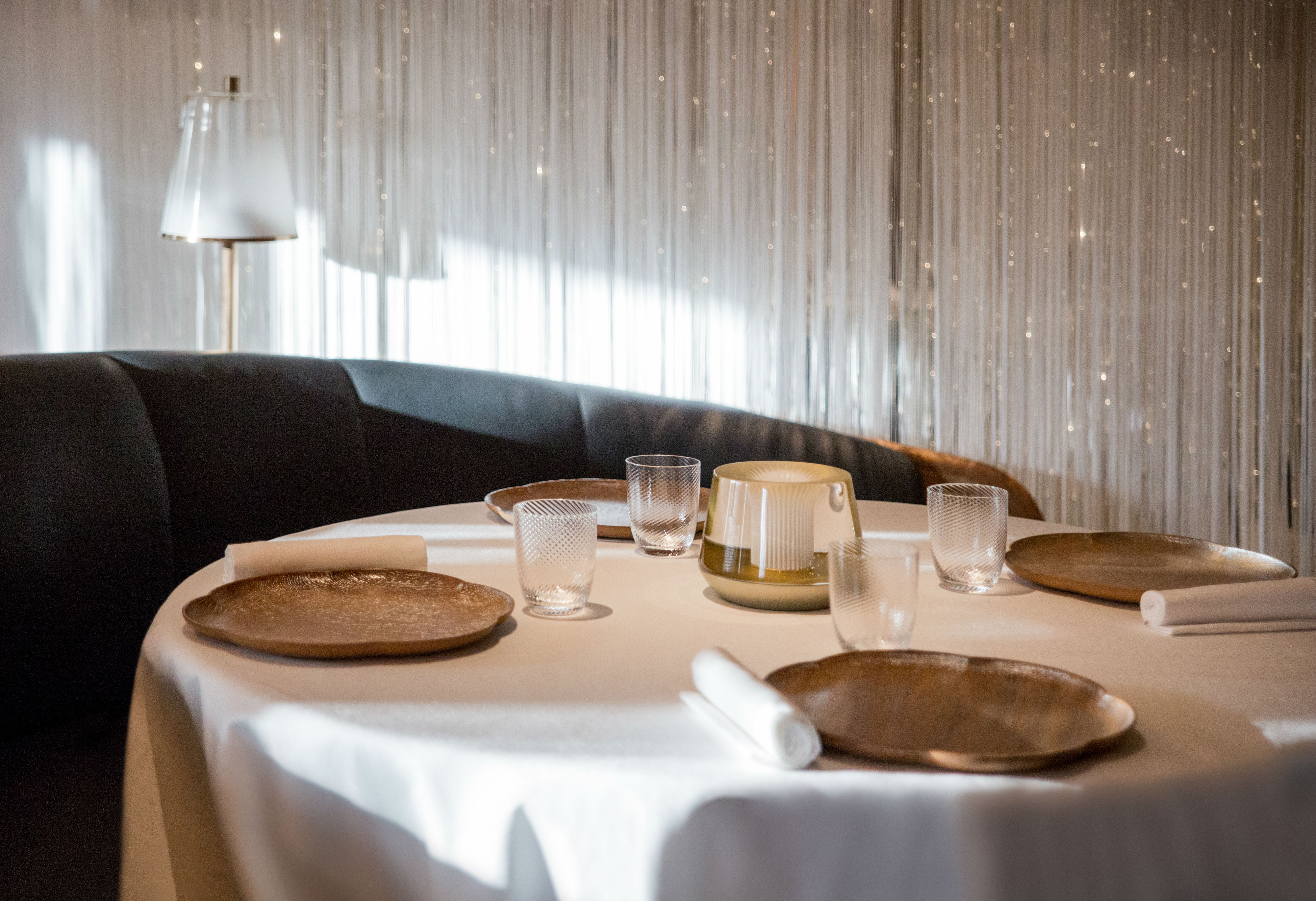 International design duo Jouin Manku originally designed the interiors for Alain Ducasse at The Dorchester in 2007; this year they have returned to update their vision for the restaurant.

Celebrated 3 Michelin-starred restaurant Alain Ducasse at The Dorchester has recently revealed its first renovation since opening in 2007. For the update, the restaurant invited its original designers, Patrick Jouin and Sanjit Manku, back to re-imagine the interiors. Working from, and using the original vision as inspiration, the design team have created an interior that enhances the “natural, textural and atmospheric aspects” of the Alain Ducasse at The Dorchester.

It has always been Ducasse’s aim to share the “raw beauty of nature” through his cuisine and dining spaces; this was made clear when Alain Ducasse at The Dorchester originally opened. The original space was elegantly designed by Jouin Manku, who were inspired by the sophisticated Mayfair locale, as well as the lush greenery of Hyde Park, which lies opposite the hotel.

Nearly 12 years later, Jouin Manku have returned to update their original vision and create a fresh look within the space. For the restaurant’s renovation, the team have held on to the creative inspiration of Hyde Park; the green space remained at the centre of their ideas, but has been re-interpreted through a different lens – the specific views of the Park that can be seen directly from Alain Ducasse at The Dorchester.

In the main dining room, the design duo have introduced curved wood and leather banquettes, opening up the room and anchoring the various tables in the space. Green and silver tones have been used in the carpets to offset the furniture’s dark wood, while lighting has been carefully considered; stylish floor lamps lie around the restaurant, and cut-glass candleholders give the room an bewitching feel.

The centre-point of Alain Ducasse at The Dorchester remains the Table Lumière, a semi-private dining experience that allows guests to enjoy the atmosphere of the sophisticated restaurant while being screened from view. The commanding focal point has been re-envisioned by Jouin Manku as a shimmering, graduated curtain of fibre optic lights; these have been hung from the four-metre high ceiling and hand-dyed for a graded grey effect.

“A restaurant such as Alain Ducasse at The Dorchester is a place where people go to celebrate the great moments in their lives, or indeed where the great moments happen,” says designers Jouin Manku. “The place itself is fused with those memories and while they don’t want them to be erased, they do still want the restaurant to evolve, to feel as magical as it did the first time they were there.”

Paris-based Jouin Manku have worked repeatedly with Ducasse Paris, currently having collaborated on seven schemes including projects in Paris, New York and Las Vegas. It’s clear that Alain Ducasse is committed to a long term vision of his restaurants by partnering with the international design duo – and at Alain Ducasse at The Dorchester, Jouin Manku have refreshed this classic restaurant’s interiors, while upholding the unique essence that diners have come to know and love.