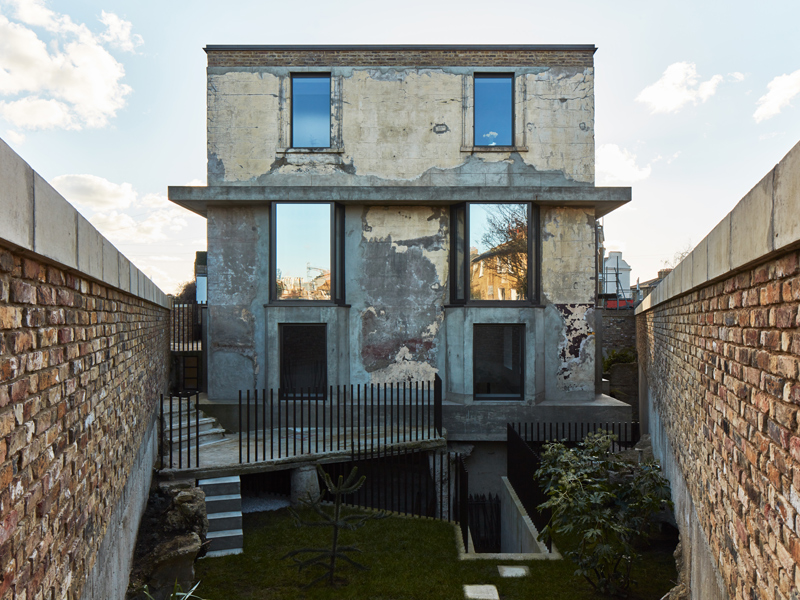 I’ve been peering over the wall at 121 Mortimer Road in Hackney, London, for a number of years, from the first time I visited the area to just the other day on a lockdown cycle. Although already behind hoarding and scaffolding when I first came across the house, it caught my eye for its derelict condition, incongruous among a road of expensive and sought-after townhouses. It still stands out now; fixed up, although not so much restored as reconciled with its history – with, having been converted by Adjaye Associates for well-known post-YBA artist Sue Webster, another layer to its story. Concrete bay windows have been created for the ground floor, with patinated bronze window frames

The Victorian property is set in a generous corner plot on the junction of two residential Hackney streets. It is double-fronted and would have had a gable-end pitched roof to match those of its neighbours, though this is gone – just one of the casualties of its unusually difficult life. That difficulty was posed by its long-time resident William Lyttle, who has earned a part in local folklore as the ‘Hackney Mole Man’ for his burrowing under and around this property in all directions over the course of four decades, beginning in the 1960s.

Reports have previously referred to him as a civil or electrical engineer, though others have cast doubt on this. In the extremes of his digging he had caused the nearby roads to crack, having destabilised them from below. Lyttle reportedly said: ‘Curiosity is my curse. If I make a start, I must know where it ends.’ The interior materials include concrete, left exposed throughout, white walls, and abundant use of wood

The most extensive description of Lyttle and his tunnelling comes from a 2015 article by Iain Sinclair for the London Review of Books. He describes a meeting with the artist Karen Russo, who was so interested in the story of the Mole Man that she had spent time tracking down and finally interviewing Lyttle. Although the interview tapes were lost, Sinclair’s account of Russo’s photos describes the underground space, along with something of Lyttle’s eccentric interior decoration: ‘Stone steps went nowhere. Basins for midgets … were set a few inches from the floor… Tunnels were stopped with sections of cars and propped up by stressed deep-freeze units. Where you might expect a picture on the wall, Lyttle hung a giant keyboard or an electric fire.’

Lyttle was eventually evicted from his home, and the house stood for many years empty and deteriorating further. Its fantastic subterranean architecture is long gone, the excavations filled and stabilised by the council with aerated concrete. Lyttle died in 2013, and in 2015 the artists Sue Webster and Tim Noble bought the house at auction. Having previously worked with David Adjaye, the founder and principal of Adjaye Associates, for the then-couple’s home and studio, Dirty House in Shoreditch, Adjaye was brought on board for this new challenge. An airy upstairs space for Webster, featuring a large skylight

The combination of backstory, architect and client makes for a fruitful trio. Webster is a fitting inhabitant of the Mole House – an article in Hunger magazine from 2012 quotes Noble describing Webster frequently diving into skips to find detritus to work with: ‘She used to get things like bits of American cars and chrome and would just weld them all together.’ Her materials could easily have been found among the 33t of debris removed from Lyttle’s tunnels, and now from the detritus of a building Webster and Adjaye have created something new. Adjaye comments: ‘What I love about working with [Sue Webster] on this project is that for Sue even though she is living there, the home is really a statement about art. The idea of making a work is as important as living there.’

For Adjaye Associates’ part, the practice’s attention to material and narrative results in a design that respects and enlivens the unique history of this building – perhaps something usually more obvious in the practice’s large civic/public works. The practice describes the design as ‘born from an archaeological exercise’, ‘an unearthing of up to 2,000t of filler concrete revealing several years of fossilised domestic history’. Remnants of this history are left to view around the sunken garden: located in the triangular point of the plot is a playground of different levels – old fragments are left to create a kind of terrace with a salvaged set of small steps down from it – and, elsewhere, mysterious openings have been left where the council’s aerated concrete has been excavated.

In homage to the tunnels there are multiple entrances to the house, but although the building has been expanded at basement level once again, it is to very different ends, creating an open-plan, double-height space that serves as Webster’s studio. From the street, the house proudly wears its ‘bunker-like’ appearance – the patched render has been retained, its pitched roof not rebuilt, and damaged window casing left incomplete. Some 15,000 reclaimed London bricks were used for areas with particularly bad damage, their colour fitting well with that of the old render.

The facade is interrupted by a concrete ledge – a supportive band slicing through the house’s middle. Below this ledge, new concrete bay windows have been created for the ground floor, with patinated bronze window frames. The new flat roof is a slate sheet with a large skylight, creating an airy upstairs space for Webster.

Many of the internal walls had been in a state of collapse, and what was left has all been removed. Instead, at the centre of the plan is a cross-shaped concrete structure supporting the new floor stabs and dividing the space into four. A cantilevered staircase takes you down to the double-height basement.

The interior materials include concrete, left exposed throughout, white walls, and abundant use of wood, both reclaimed and plywood, and concrete tiles. In the cavernous studio basement, in addition to windows from the ground and lower ground levels, a dramatic cross of strip lighting is laid across the two diagonals of the exposed concrete ceiling.

With its storied facade drawing in the passer-by yet refusing them access, with a high fence that hides the sunken garden and reflective film on the windows, the building appears to thrive on its mystery. Curiosity was what nearly destroyed this building, but is also, in the capable hands of Adjaye and Webster, what saved it. 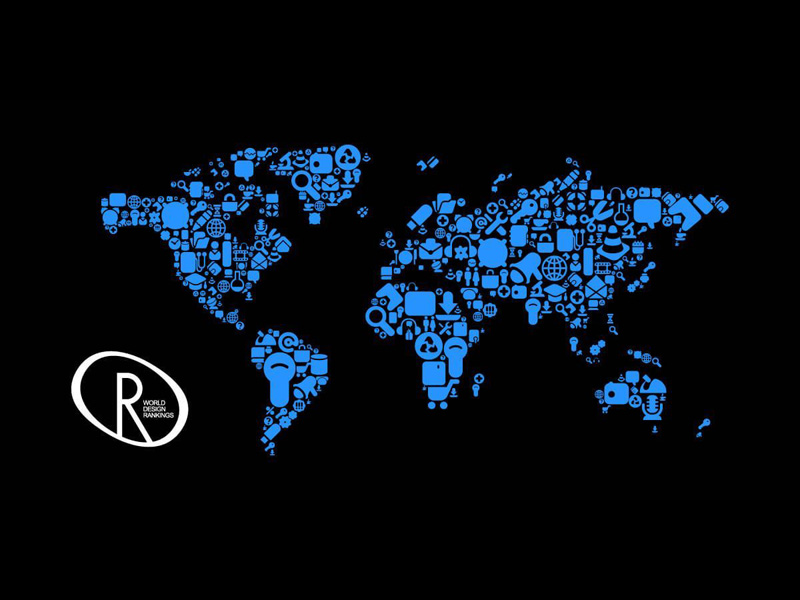