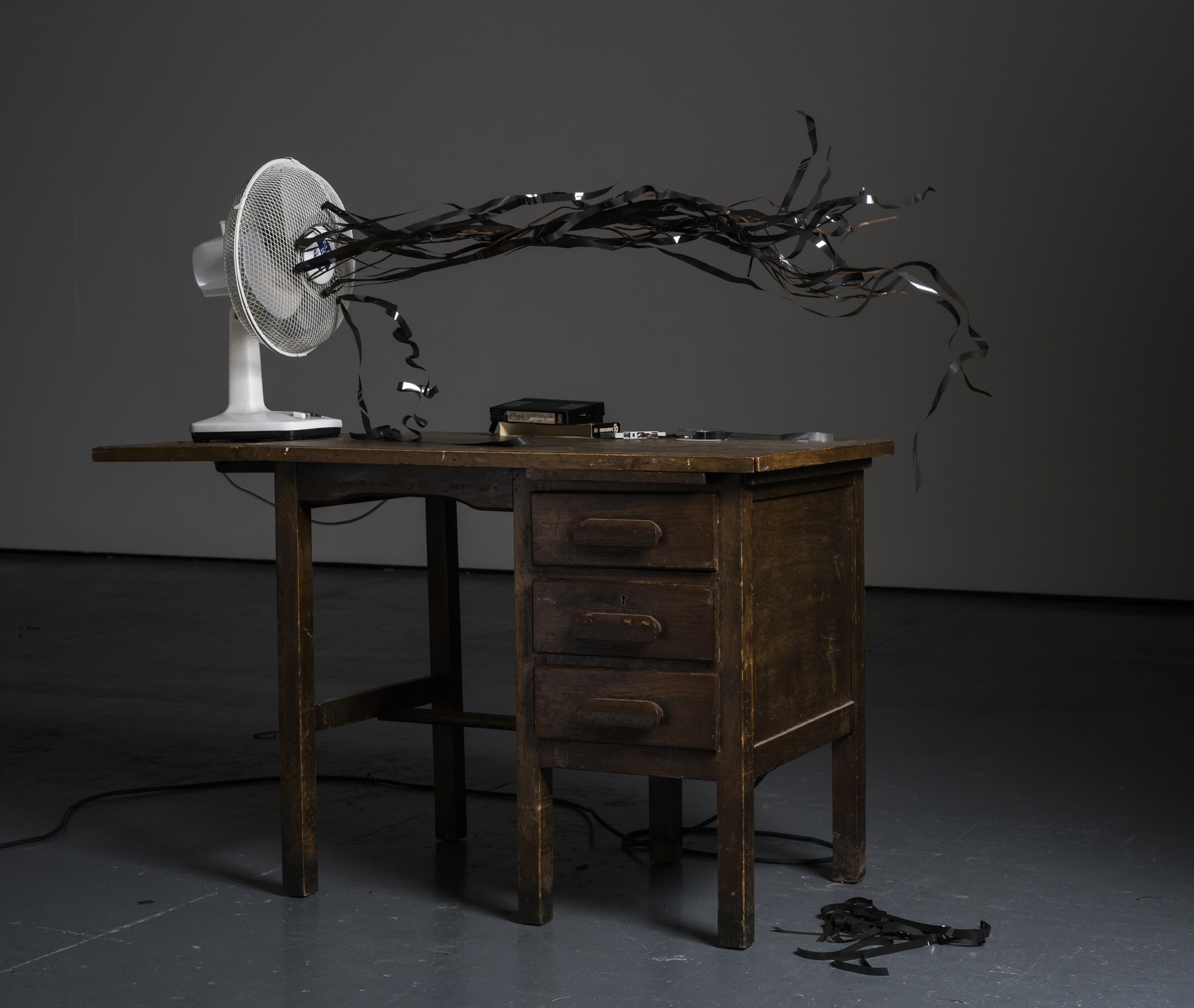 Combining film, photography, sound, objects and text, a new exhibition at the Oriel Davies Gallery in Newtown, Powys, hopes to reveal the gaps between what is seen and said, heard and understood. Bringing together new works by Cardiff-based artist Anthony Shapland, the exhibition is titled A Sound Not Meant To Be Heard – which is a direct reference to the art of Foley. Foley is a process used predominantly in film to create sound effects, where the sounds are created independently from the moving images. It is often so well integrated into a film that Foley remains unnoticed by the audience – but it exists to create ‘reality’ within the scene. These fictional noises hold the footage together; without them, scenes can feel unnaturally quiet or uncomfortable.

There is a disconnection between the object creating the sound and the noise generated, which has become the base of the A Sound Not Meant To Be Heard exhibition. The exhibit presents an interconnecting range of individual works, which have been developed and choreographed meticulously. The usually hidden practice of Foley is evident through a number of the works, the most apparent being a series of prints where objects and sounds become sculptural and performative.

Shapland hopes to highlight and invert some of the Foley processes within the work portrayed in A Sound Not Meant To Be Heard. For example, within the exhibition, a long strip of Welsh wool carpet intersects the gallery in a reference to a walkway known as a ‘Foley pit’ - a diagonal strip across a Foley studio used to generate sound effects. Throughout the exhibit, this Welsh wool carpet is the only place where footsteps are muffled.

Presented at one end of the walkway is also a film in three parts. A flatscreen shows the film Broadcast, presenting a character (Shapland) as he wanders the Welsh landscape of the Rhymney Valley. Simultaneously, the second screen – a smaller flatscreen – rests on the wool carpet and features Foley artists using props and a mixing desk to generate a soundtrack for Broadcast. This recording provides all the sound for the film, except for a moment when the character shouts – this human sound remains silent in the film, because Foley artists to not recreate speech. Finally, the third screen – an autocue – shows a script that can be read as the narrative or voiceover for Broadcast. With an awareness of how fiction is created through the editing of footage, it is clear from the exhibition that Shapland has a fascination with the act of viewing and reviewing moving images. His works feature believable illusions on many levels, providing viewers with an inside look into the world of film and Foley, whilst also questioning how these art forms reflect our everyday lives.

A Sound Not Meant To Be Heard runs from the 10th February – 11th April 2018 at the Oriel Davies Gallery, Newtown, Powys.