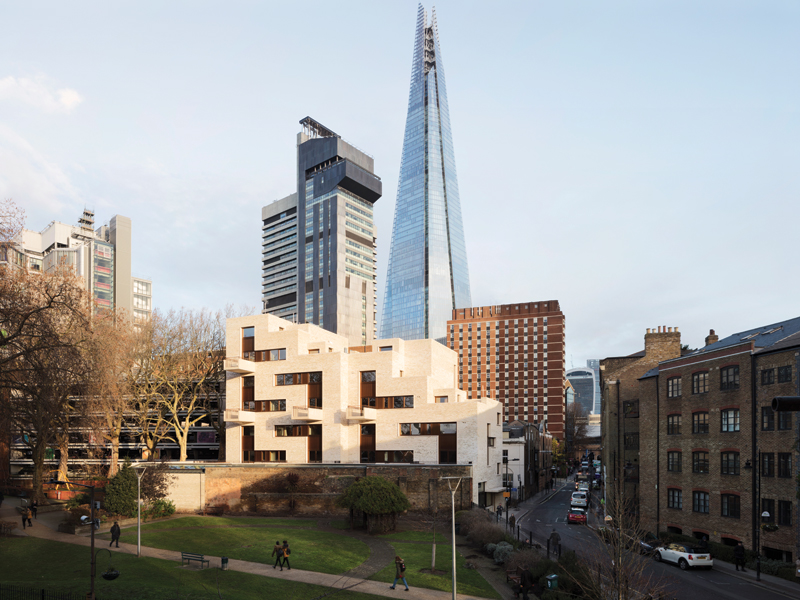 Next to the transformed London Bridge Station, a new kind of mansion flat block has risen, with a 21st-century, high-quality take on brutalism — and a craft-focused design approach described as ‘slow architecture’

In the shadow of The Shard, a mere one-minute walk south from the new London Bridge, you come across a small and unassuming corner park. Stop and turn around, though, and you are suddenly struck by the vision of stacked pale-brick cubes, gently reminiscent of Moshe Safdie’s Habitat 67 in Montreal — ‘Tetris brutalism’ might be a good way to describe its style. The Shard’s iconic glass peak and the stocky tower of Guy’s Hospital poke above the new south London development as if in a playful competition of architectural styles and materiality in the cityscape.

This brick building is a new development from architecture firm AHMM and independent developer Solidspace, featuring eight residential units totalling 1,400 sq m, and ground-floor, double-height office space of 470 sq m. Sited next to a small neighbourhood green space, Guy Street Park, as well as a surprisingly elegant multistorey car park, 81–87 Weston Street strikes a fine balance between statement architecture and contextuality. Although the roofline varies, dropping towards the street side, it is a firmly mid-rise building. The eight apartments — three 150 sq m, three-bedroom units and five 118 sq m, two-bedroom units — are arranged in two staggered interlocking clusters, with a stair and lift core running up the middle of each, and terraces set into the stepped roofline. It may not look like your average mansion flat block, but Solidspace’s founder and creative director Roger Zogolovitch insists this is the driving reference for the development, with the units arranged around stair cores rather than corridors. ‘We’re devoted to the idea of mansion flats,’ he says proudly as we walk around the development on a sunny winter afternoon. ‘When building on inner-city brownfield sites the mansion block offers the distinction and character that is missing from the average apartment building. In Weston Street, this arrangement allows for more of a community feel for the residents, which encourages neighbourliness.’

On the exterior, there are details that allow the building’s strength of form and materials to dominate, without unnecessary clutter or distraction: instead of inserting air vents into the exterior, the brickwork itself opens up to create decorative lattices that double as practical ventilation.

This brick, paler than normally seen in London, is handfinished Weinerberger brick in a creamy-grey tone, which both contrasts with the darker grey of neighbouring buildings such as Guy’s Hospital and matches the light tones of pre-cast concrete balconies that jut out as neat solid blocks on the building’s southern facade. Adding to this mix, and providing visual warmth, are ribbed, bronze-hued, anodised aluminium spandrel panels. The arrangement of the fenestration — in T or L shapes, pushing the Tetris reference one step further — expresses the arrangement of the residential units within. The apartments themselves provide both the driving vision and the greatest appeal of the development (the kind of strikingly desirable home that prompts you to check your bank account longingly). They are each defined by a triple-splitlevel, double-height, eat-live-work space, the so-called ‘DNA’ of Solidspace’s residential developments. It’s a relatively simple, if potentially divisive, idea in which a flexible, open-plan and yet subtly separated trio of spaces on multiple levels flow into one another. Solidspace believes the flexible space supports a more flexible lifestyle: ‘It's a way of living more suited for the 21st century,’ says project manager Petra Marko.

Did AHMM feel restricted by the pre-determined design approach? ‘Roger and I have actually been talking about our shared interest in the split section since we met 30 years ago,’ says the practice's co-founder Simon Allford, explaining his enthusiasm for working with Solidspace on the idea and ‘developing it further’. ‘My aim at Weston Street was to make the perfect prototype. Where space flows, light is borrowed and shared — and yet rooms remain specific spaces with their own volumetric quality.’ Beyond the defining central eat-live-work space of the apartments, there are medium-sized bedrooms with large windows and sleek bathrooms finished with white marble and porcelain tiling. Interestingly, two of the three-bedroom units have already been transformed by their owners into two bedroom homes to increase the sense of space. The largely unbroken, flowing space of the homes (there are only doors to the bedrooms and bathrooms) is supported by an innovative active fire sprinkler system (engineered by Intelligent Mist) that removes the need for fire doors in the apartments.

Materiality is as vital in the interior as it is on the exterior — and creates a powerful, compelling, aesthetic. The textured grey of shuttered concrete is balanced by the generous use of oak or walnut on internal stairways, large windowframes, and parquet flooring, which brings warmth to the homes even on overcast days. Of the approach to materials, Allford says: ‘I am focused on what I term “essential architecture”, where nothing can be taken away and nothing needs to be added.’

The concrete formwork was painstakingly handmade using rough-sawn Douglas fir, creating idiosyncratic patterns of raw plank-mark finishing that speaks of the attention to craftsmanship in the construction. ‘The board-marked concrete provides a particular character and — because of its broken and textured surface — a soft acoustic,’ explains Allford.

The use of GBBS (blast-furnaced ash) in the mix also gives the concrete a lighter, creamier finish that prevents any sense of grey gloominess in the apartment from the abundance of raw concrete used. Nevertheless, the concrete ceilings lack the formwork; this feels like a slight misstep considering it becomes the only place where the potential oppressive quality of the material is noticeable. The aesthetic is one of a new brutalism for the 21st century: powerful straight lines, a celebration of raw materials, an embrace of natural light and a utopian vision of residential living at its heart.

Zogolovitch purchased the site in 1986, at which point there was an unremarkable 20th-century warehouse building, which he used as offices. But in 2008 he decided to develop the site in line with his company’s ideas. Zogolovitch established Solidspace in 2003, having worked as an architect for a number of decades — he co-founded CZWG in 1978. Although it is tempting to see Solidspace as more of an architectural practice, Zogolovitch’s mission was to become a small-scale developer dedicated to finding and transforming gap sites and pocket plots, and building great houses.

Zogolovitch is particularly drawn to pocket sites as they present an exciting challenge: a context of layers of history, along with inherent spatial or technical restrictions. Within this he is committed to maximising the space and ‘ensuring each residential unit has its own unique character and experience.’ He is a champion of small and medium-sized developers as vital actors in helping address housing crises in cities like London; in 2015, he published Shouldn’t we all be developers?, a book promoting this idea.

With each project, Zogolovitch and his team select an architecture practice to work with to realise the finished product. He reflects that these collaborations ‘enrich’ the process of development; with Simon Allford of AHMM, he found an ally with whom he could have a one-on-one working relationship in order to shape every detail of the design — something you don’t tend to see in the collaboration between large developers and their chosen architects. ‘There’s a shared language, because although I am a developer, I’m an architect too,’ explains Zogolovitch. ‘Simon and I sat down in intense sessions to discuss materiality, fenestration, interior space — every aspect of the project. We never let go of the details.’ Allford agrees: ‘The project was small enough for Roger and I to retain total control — and yet large enough to become a new model.’

Indeed the shared residential spaces were given the same careful attention as the apartments: the core staircases giving access to the homes are not only flooded with natural daylight through full-height landing windows offering local views, but continue the celebration of materiality with pale, birch-based plywood, raw concrete and sleek, embedded, vertical strip lighting. Through all of this — and the fact that they are not hidden away and hard to access like in other lift-orientated apartment blocks these days — the stairways feel communal and liveable, a place in which you might pass, stop and chat to your neighbour, in the rays of morning sunlight.

As well as the homes, there is the separately accessed ground-floor office space — a free-flowing, almost cavernous space for a single tenant in which the shuttered concrete dominates the palette, complemented by a continued embrace of natural daylight through a long skylight along the building’s southern edge and a large ocular skylight at the western end. While the entrances to the residential units are only accessed through a courtyard on the building’s northern side, the main office entrance opens on to the street, stitching the development into the local streetscape.

With their painstaking craftsmanship, high-quality detailing, central London location and exhaustive design process, these homes are not necessarily affordable. But they certainly are more beautiful, unique, and lovingly designed than most high-end housing stock in London today (as well as sustainable — the lack of car parking spaces encourages residents to use the nearby public transport). To live here is not to live in an Identikit glassy luxury tower; the apartments feel like true homes rather than investment showrooms, with the experiential quality of inhabiting them carefully thought through in the design. ‘Roger and his team wanted to build things a particular way — where trades become crafts,’ adds Allford. ‘This is slow architecture, but it pays over time.’