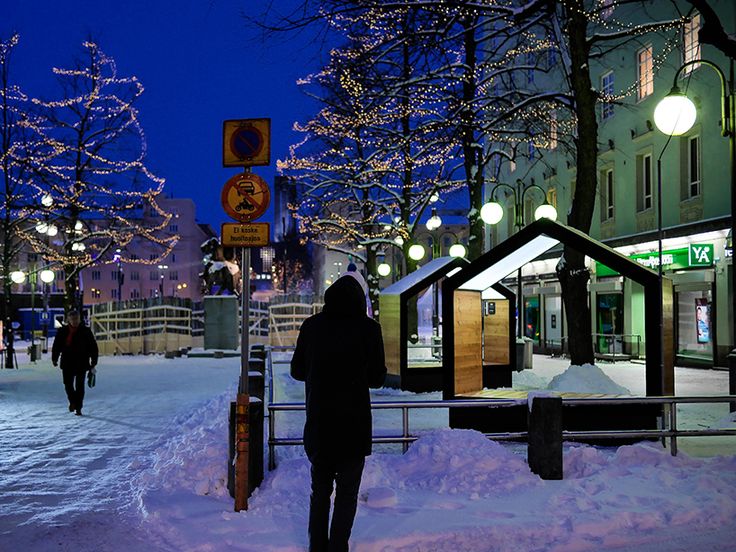 In the fast paced world we all live in, it’s nice to take a moment to stop, sit and soak in the environment around you. This wide range of design diverse benches make the perfect pit-stop, as they help to inspire a sense of refuge, community and unity for anyone, anywhere!

The first prototypes of this award-winning Mokša bench were presented during the FIS Nordic World Ski Championships 2017 in the Finnish city of Lahti. This design came to fruition from a collaboration between Mimo Lahtinen, Suvi Saastamoinen and Mikko Rikala from the Finnish infrastructure company Sito Ltd and outdoor lighting manufacturer Tehomet.

Central to the design is the adjustable lighting that users control with a touch of a button — offering a brighter haven in the dark winter months. They wanted the bench to work as a meeting point and feature as an urban landmark in the city. The thin illuminated light panels installed onto the roof-like overtop were chosen, used to gently reflect the warmth of the wooden frame, making it a comfortable, safe refuge for users. Not such good news for the iconic London phone box, however, this collaboration between Strawberry Energy, MKTG and Cancer Research UK has been a long-time coming for all those on-the-go internet addicts! This all-singing all-dancing ‘smart’ bench offers much more than just a comfortable place to rest your legs.

Powered by a clean energy source, these ‘Strawberry Smart’ benches feature solar energy at the heart of their design, using it as a way provide commuters, tourists and residents with  a place to charge up mobiles, tablets and portable music players, as well as access to free Wifi.

Gone are the days of forgotten phone chargers and dead batteries, these ‘smart’ bench hybrid designs see functionality and technology merge in the greatest way! The bench design itself, originally created by Belgrade-based architect Miloš Milivojevic back in 2015, continues to create strong public reactions, from those who are attracted to the elegant and striking architecture it offers.

The ‘Rotunda’ bench is one of ten experimental pieces of public furniture created by international designers to help regenerate a park area just outside Stockholm, Sweden. The brief for these benches was two-fold. Firstly they had to reconsider the concept of the traditional park bench while crucially retaining its sole function, to provide seating.

The Rotunda is the statement piece of the collection due to its unique design and multifunctionality. It is a place of rest and refuge from the hustle and bustle of city life. It can also be used as a park amphitheatre. Its sleek design approach brings helps to merge urban linearity with the wild, natural landscape - creating an exciting, dynamic juxtaposition.

Situated adjacent to the Palace of Culture – Warsaw’s trademark building – nestled between clumps of trees are these colourful, paperback book inspired bench designs. An undeniable urban focal point, these benches were introduced in Warsaw but have since sprung up in Kraków, Wroclaw, Gdansk, and Poznan. They’ve attracted a huge buzz with both tourists and residents alike. There’s even a bench that has been signed by over 50 significant Polish artists and celebrities.

However, while these benches, an undeniable merging of functionality and street art, helping to bring a relaxed, playful and colourful element to the city. The bench initiative was launched by the Zaczytani Foundation and is aimed at helping to promote reading among local people and also as a part of ‘The Great Books Rebound’ campaign to encourage book donations to hospital libraries.

Wolfond’s mathematical approach merged with Knutson’s experimental eye has resulted in a spectacular bench, constructed through the elegant bending of a flat sheet of metal.  The base itself is shaped into two columns that split in half and curve in opposite directions and the sides are marked with thin perforations. The bench is finished with a zinc coating which protects the steel from rust and breaks up the geometric shape with a shimmery texture.