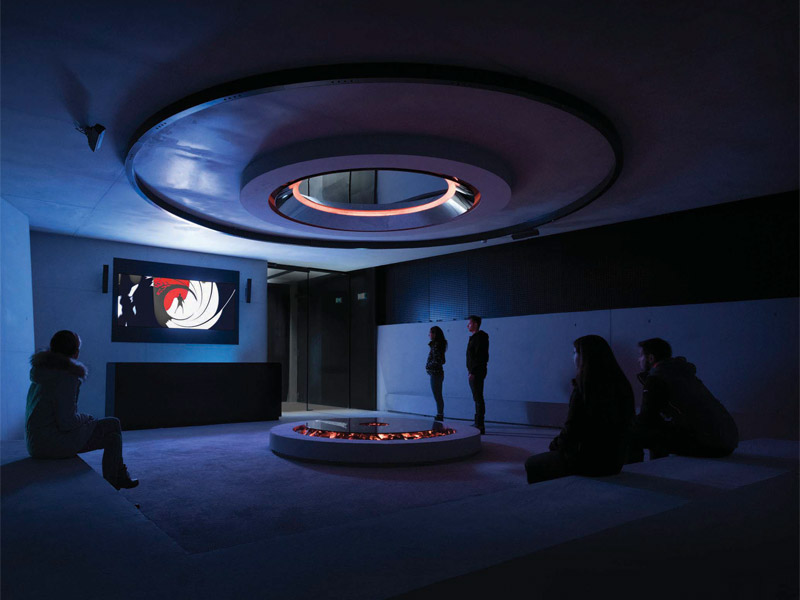 High up in the Austrian Alps, a new museum experience for James Bond lovers, 007 Elements, has been created by Obermoser Architects. Following multiple technical challenges, what has resulted is a breathtaking brutalist building, buried in a mountain

If someone down the pub told you a guy who runs a cable car company had a dream to build a James Bond museum up a mountain in the Austrian Alps, the chances are high that your expectations would be low. Immediate images conjured up, in my head at least, were of a few bits of unofficial Bond memorabilia sitting in glass boxes with perhaps a second-rate Roger Moore waxwork replete with waving arm to greet you at the entrance. Thankfully, the new 007 Elements museum was envisioned and delivered on an altogether grander scale.

Yes, it was the dream of an Austrian guy, Jakob Falkner, who runs a big cable car company, Bergbahnen Sölden, but with even bigger ambitions and a €10m-plus budget. These funds allowed him to commission a bespoke brutalist building by Innsbruck-based Obermoser Architects to plug into the permafrost up on the snowy Gaislachkogl mountain while persuading Neal Callow, the art director of the last two James Bond films (Spectre, Skyfall) to curate with the help of LAbased experience design agency Optimist (Harry Potter, Nike) and VFX graphic and sound studio Territory (Blade Runner 2049, Ghost in the Shell). Throw in the logistical blessing of EON Productions and MGM, which jointly own the rights to the Bond film franchise and access to its official archives, plus the fact that the building’s intended mountain location had already been used for multiple snowy scenes in Spectre — and it becomes clear this was a project starting out with serious clout and credibility. The reason Falkner was inspired to bankroll the idea and choose Johann Obermoser as its architect in the first place, was because when EON’s film crew were scouting out locations for Spectre in the area back in 2014, one of Obermoser’s previous creations — the ICE-Q restaurant atop the same mountain — had just been built and caught their eye. The exterior of the minimalist glass-box building was ultimately used for the scene where Bond checks in at the snowy Hoffler Klinik for a meeting with Dr Madeleine Swann, before they both endure a rather messy commute back down the mountain.

The new 007 Elements building is situated right next door to ICE-Q at an elevation of 3,040m. Set into permanently frozen ground with geological fault lines, it posed some serious technical challenges — but Obermoser’s experience in such settings was key. For instance, the decision to exclude heating and air-conditioning in the building was taken very early on, partly to let visitors feel the extreme climate conditions of high altitude within the building’s innards, but also to keep it cool for structural reasons. Indeed, the final building features large but hidden air gaps between exterior and interior walls with sophisticated monitoring equipment to help keep its temperature at a stable 1°C to prevent the building getting hot enough to undermine its frosty foundations. From an aesthetic viewpoint, the key players involved wanted to reference the type of secret lair a Bond villain — or indeed original Bond film production designer Ken Adam — might approve of, so Obermoser held brainstorming sessions with Falkner, EON Productions, Callow and architect-turned multidiscipline creative Tino Schaedler from Optimist to help conceive both the imposing structure and the internal space.

Falkner tells Blueprint: ‘It was a small team, but from the start, everyone had passion.’ Early ideas included a dish-shaped building angled at 45 degrees to the sky, like some kind of giant satellite receiver, and a round main building with ribbon-like walkways to auxiliary rooms below that aped the look of an unspooling film reel.

However, as Obermoser concedes, some of these approaches were a little complex for the site: ‘Early studies featuring spectacular approaches near the cable car station turned out to be unsuitable for the existing architectural ensemble at the summit. Eventually, the themes “inside the mountain” and “iceberg principle” were selected.’ The final concealed design features only the entrance, exit, two projecting windows and a terrace area visible from the outside. Seven main ‘free’ architectural elements — in that every room is a different shape and height — are connected by ramps embedded into the mountain that lead the visitor through and imperceptibly downwards before exiting the building 9m lower. There’s a practical reason for using ramps rather than stairs in the public parts of the building too. In the winter, many of the exhibition’s visitors will inevitably be skiers returning to the top by cable car from nearby pistes wearing cumbersome ski boots, and so attired, gentle ramps are easier to negotiate than steep steps.

The three main materials employed in the building are concrete, steel and glass. Case-concrete defines most of the architectural surface and character inside and out, while black stainless-steel doors divide the rooms and perforated black steel panels are used for suspended ceilings and soundproofing. All the technical elements of the building are hidden. Links to the spectacular views outside are made through narrow windows and large openings — as well as one spacious outdoor terrace called the Plaza — which combine to play with visitor perceptions, by turns dark, enclosed and slightly foreboding, to bright and open-air. Another view of the interactive booths in the Tech Lab. Image Credit: Kristopher Grunert

Integral to the experience are the audio-visual effects, many of which were created by London-based Territory. The agency was also deeply involved from the start of the project, working with Optimist, and able to leaf through original Ken Adam artwork via an LA-based researcher, decide on the position and sound of bespoke speakers, plus live-mix tracks in the actual space. In the Briefing Room part of the installation for instance, a five-minute film by Territory, explores the amazing locations and set designs so crucial to the Bond franchise, weaving together original photography and film footage from behind and in front of the camera plus vectorbased graphics to illustrate location and terrain. As this round room featured 360-degree visuals it was important to employ sound design to good effect too. ‘That’s what I love about an immersive installation,’ says Alice Ceresole, Territory’s producer on the project. ‘You can really take people on a rollercoaster ride.’

Further rooms include the Tech Lab — a bit like Q’s testing room — featuring some neat interactive displays mixed with classic props that then leads on to the Action Hall. This larger space features a full-sized plane like the one Bond piloted in 2015’s Spectre snow chase scene — suspended in space and seemingly flying right through the room’s large plate-glass window — plus a wonderfully large and intricate diorama of how the stunts in that film sequence were actually created. The Action Hall features a full-sized plane like the one piloted by Bond in 2015’s Spectre snow chase scene. Image Credit: Kristopher Grunert

Either way, Falkner will be hoping the 1,300 sq m space firmly puts the Austrian resort of Sölden on the map, as he confides at the end of the guided tour: ‘We don’t want people to visit 007 Elements and say, “Well, it was OK.” The wow factor is important.’ Even judging by the early walk-through preview in April, with not everything working and tweaks required (the exhibition opened to the public in July) — he really needn’t have worried. The building, space and experience are all genuinely breathtaking and well worth an hour-long diversion from the piste, whether you’re a die-hard Bond fan or not.