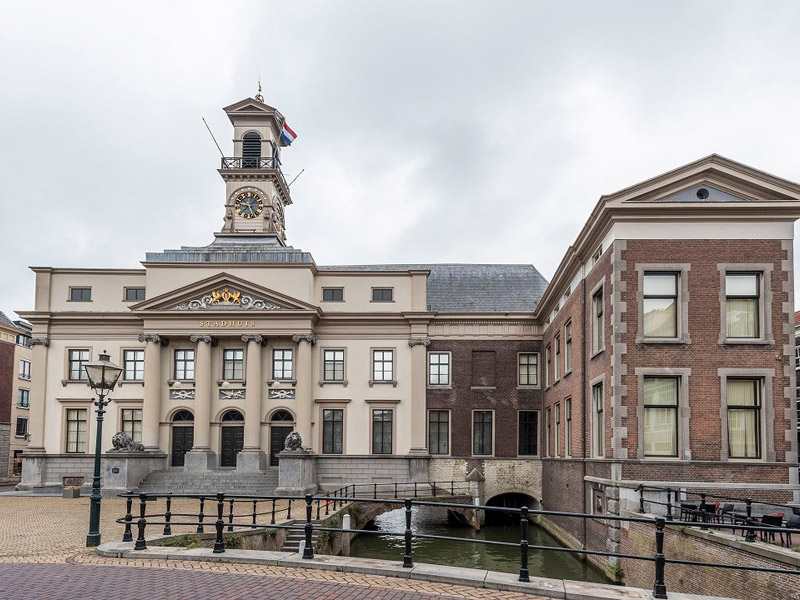 Thanks to an electrical refurbishment at the town hall in Dordrecht, the Netherlands, the historic building is now protected against arc faults.

Visiting the town hall of Dordrecht is like a journey back in time. Today, many of the buildings are still the same, but what has changed is how they’re operated.

One example is the electrical installation, which today facilitates the operation of everything in and around Dordrecht’s town hall. Starting from the Wi-Fi in the council hall and the audio in the wedding hall, through to the lighting of the six-century-old prison cells in the attic.

Despite its construction in 1383, the building must comply with a range of modern building regulations, including the application standard NEN1010 (comparable to the German DIN VDE 0100 – 420). Areas in which there are no regulations but recommendations are given a particular focus as well as a sympathetic eye to the building’s historic character.

For example, the detection of arc faults is not mandatory according to NEN1010 but recommended as a precautionary, protective measure.

Due to the completely wooden construction of the attic, protection against arc faults should not be considered a superfluous luxury. More than 30% of all fires are caused by faults in electrical installations and a number can be prevented with the arc fault detection device (AFDD).

Safety as a priority

The municipality attaches great importance to safety. That’s why proactive maintenance, including the few visible technologies in place, remain at the top of the agenda.

Inspections offer the possibility to check whether relevant laws and regulations are complied with. For example, inspections identified that the enclosure in the attic needed to be condemned. Since the installation of the enclosure in 1985, there have been several technical developments to update the area accordingly.

In the attic, heavy wooden beams define the floorplan where the boiler house is located. Due to the narrow and completely wooden surroundings, special care is needed and the detection of arc faults, overloads and short-circuits is vital.

As an example, loose wires or cables could cause sparks or discharges released by touch. With the voltage difference, sparks could ignite the ionized gas between the conductors.

Ionized gas cannot be detected by residual current or miniature circuit breakers so they will not break the circuit, which can result in an electric arc fault. In the event of an electric arc, heat is released and can lead to a fire. In surroundings completely made of wood, this represents a high risk.

In order to protect the historic surroundings against the consequences of arc faults, Gertenbach Elektro cooperated with ABB to renovate the installation in the attic using the AFDD.

A Gertenbach Elektro representative said: “We’ve been cooperating with ABB for several years and are very pleased with the quality of their products and their expertise. The AFDD is a good example of such a high-quality ABB product.”

An AFDD with an integrated miniature circuit breaker (MCB) can not only detect arc faults but also protect electrical installations against overloads and short-circuits.

The AFDDs S-ARC1 und S-ARC1 M are available with breaking capacities of 6kA and 10kA. For connection with cables or terminal blocks, the AFDD is equipped with bi-directional cylinder-lift terminals.

Maximum safety and service continuity is guaranteed thanks to continuous self-testing. By pushing the test button it is possible to check the correct functioning at any time. The AFDD portfolio has also been extended with DS-ARC1, an AFDD with integrated RCBO (Residual Current Circuit Breaker with overcurrent protection) that can detect earth fault currents.