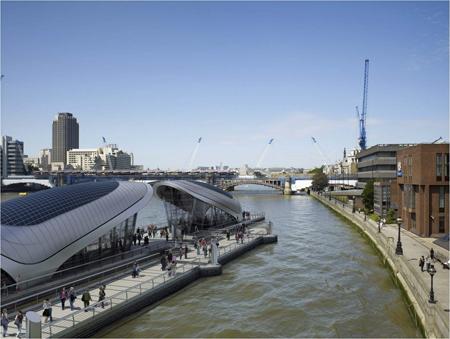 Anyone planning a major development on the River Thames in London will soon find out that you can't please all of the people all of the time.

The Millennium bridge (AKA the Wobbly Bridge) and the Millennium Wheel (AKA the London Eye) both had their fair share of criticism when they first opened, with some suggesting the London Eye represented all that was wrong with Tony Blair's Britain. But Londoners have since embraced both - since it opened over a decade ago, the Eye has become one of the city's most iconic landmarks, while the Wobbly Bridge has managed to shake off its embarrassing nickname.

Those familiar sights may soon be joined by the as-yet-un-nicknamed London River Park, a one kilometer-long floating pontoon whose developers are anxiously awaiting planning permission as I write.

Designed by architect Gensler, the proposal involves a tree-lined floating walkway running in two sections from St Paul's Cathedral to the Tower of London alongside the north bank of the river Thames. Seven floating pavilions would be placed along the length of park, and at one end there would be a lido with a 25m-long swimming pool.

The plan is that the new 'park' will be built in time to feature in the celebrations for both the Olympics and the Queen's Diamond Jubilee. Despite backing from London Mayor Boris Johnson, however, the project has come in for criticism from Cabe (the Commission for Architecture and the Built environment) as well as local residents. Responding to the planning application, Cabe said that, while it supported 'the concept of a temporary park on the River Thames', there are 'significant issues' with the design that need to be addressed.

The design watchdog went on to say that the project looked more like 'a pier or walkway' than a 'park', that the proposed pavilions 'are unimaginative and corporate in appearance', and that sustainability should play a greater role in the design.

Some residents of London's north back have also laid into the proposal with some suggesting that the scheme would be an 'unwelcome intrusion into the character of the river'.

However, according to developers, when asked at a public exhibition, 76 per cent of people asked thought the river park plans were good or very good.

A decision on planning approval is expected next month.