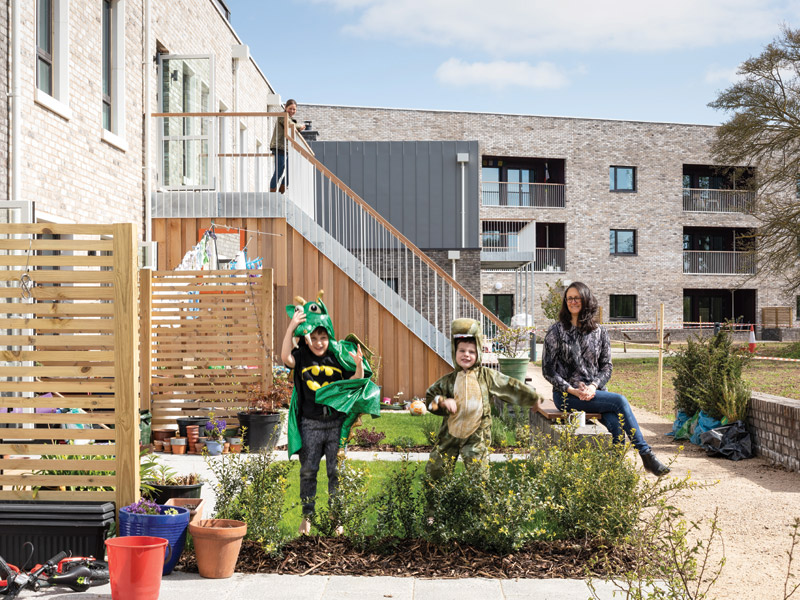 Veronica Simpson encounters Marmalade Lane, an exceptional housing project in Cambridge delivered by a cooperative with the help of a sympathetic local council

Can you tell me what’s odd about the following scenario? In a sunlit double-height community space just completed in north Cambridge, fringed with well-made, well insulated, nicely proportioned and detailed new homes, there is a gathering of some 80 people. The residents – many engaged in the business of cooking and serving up a vegan curry – seem happy and settled in this and the surrounding spaces, even though most only moved in within the past three months. The architect, Meredith Bowles of Mole Architects, and his team are relaxed and at ease, as are the developers (Town and the Swedish timber panel maker Trivselhus), and a clear rapport is evident between them. During the speeches the builder, local firm Coulson Building Group, comes in for praise, as does Cambridge City Council, especially councillor Dave Prinsep, head of property services, who helped to steer this cooperative housing project through its roller-coaster ride to completion.

Anyone who has followed the miserable stories of Britain’s generally shoddy provision of housing on any scale over the past two decades, for anyone other than the super-rich, doesn’t really need it spelled out: this is a remarkable project on every front.

Marmalade Lane cohousing is an £8.3m scheme of 42 homes surrounded by a sprawling neighbourhood of standard, Noughties, boxy, developer-led housing, known as Orchard Park. But this new development doesn’t flaunt its different provenance or ambition with quirky finishes or achingly contemporary design. The homes, a mixture of two- to five bedroom houses and one- to two-bedroomed flats, are spread out along terraced streets that surround a large communal garden. They meet the surrounding community in a spirit of neighbourliness. The one internal street is traffic free, a place for play and relaxation, as evidenced by multiple benches, sandpits, thoughtful planting and a couple of small football nets.

Cooperative housing schemes are on the increase. As an atypical model for development, however, they are hampered by a lack of experience within both communities and councils, but what these groups lack most sorely is land. And Prinsep admits that this land wouldn’t have come up for grabs if it hadn’t been for the economic downturn of 2008, the year he joined Cambridge City Council: ‘In my first week as a councillor the sale of this site fell through. The market fell off a cliff. The developer walked off the rest of Orchard Park as well.’ So the council went searching elsewhere for possible expressions of interest, and heard of a Cambridge-based cohousing group that had set up in 2000 and was still looking for land. Conversations evolved, and the council supported the group in developing a proper brief and feasibility proposal with the help of codesign consultant Stephen Hill, C2O Futureplanners and Instinctively Green. Then a two-stage open developer competition was launched in 2014, to establish bidders’ design and delivery credentials before inviting financial offers. Of the two parties that stepped up to bid for the project the cohousing group selected Mole Architects and Town, a young development company, led by Jonny Anstead and Neil Murphy, with ambitions to design goodquality, sustainable and community-centric urban housing. For financial as well as sustainability reasons Town formed a joint venture with Trivselhus. Running to 60 pages, the brief offered admirable clarity, but also challenges, as Bowles says: ‘The basic understanding of the site revolved around a common, shared garden … They wanted it to be car-free so that streets and gardens become a playground for kids. There was to be a common house, a workshop and gym, a quiet room and yoga room. All of these facilities enable residents to come together and share things instead of owning everything themselves.’ Communal spaces are a key component of the Marmalade Lane development

However, says Bowles, ‘we also had to try to make it replicable and cost-effective’. Mole’s solution was to come up with five shell house or flat types, which can be customised through a variety of configurations of floor-by-floor plans, including kitchens and bathrooms, and one of four external brick specifications.

All the houses are 7.8m deep, but vary in width, so that they can be distributed in any sequence along a terrace. With the consequent variation in widths, brickwork, windows and door colours, Bowles says ‘you have individuality within a cohesive whole’.

Triple-glazed aluminium and timber windows and electrical ducting were factory-fitted, also speeding up construction on-site – a single house could be constructed in two days. Air source heat pumps provide low-carbon electricity and houses with south-facing roofs have their own solar panels.

But it’s the communal spaces that mark out Marmalade Lane. The central garden has allotments for shared food growing. The communal kitchen and lounge host a weekly meal, and the common house building offers shared laundry facilities, a yoga room, a quiet space and three spare bedrooms for guests. Frances Wright, one of the residents, says: ‘It’s very hard to go anywhere without some sort of social interaction. You don’t have to go looking for it; it’s going to come to you.’ This not only improves quality of life, but reaps huge dividends she says, when keys are lost, litter needs to be picked up, or birdlife needs to be attracted back to the site with regular feeding.

This project has converted councillor Prinsep, who says: ‘We started off quite cynical and over time we have become more convinced and enamoured of the idea. The cohousing group has really worked to hold everything together.’ Misconceptions that other councils might have – that a cohousing project wouldn’t be able to match the land price of a more standard house builder – are not accurate, says Prinsep: ‘The land value was where it should have been, or thereabouts.’ He concludes: ‘This is fantastic example of a council working with its assets to really maximise a piece of land for people in the community and people living here. My cynicism has gone now. We don’t need one rich benefactor making sites available. We have alternatives.’