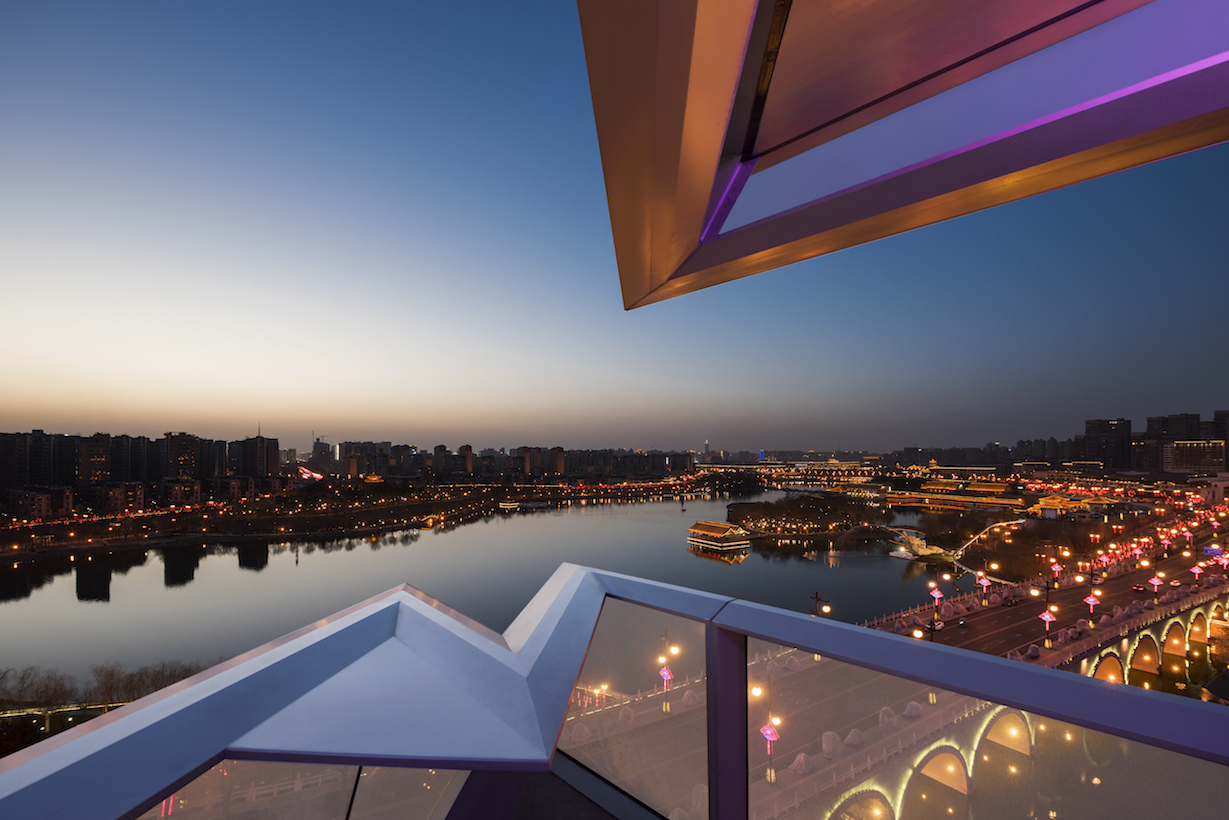 The new W hotel in Xi’an, China, has opened its doors, with spectacular interiors designed by AB Concept. We speak to the studio’s co-founder, Ed Ng, to find out more.

Based in Hong Kong, international design powerhouse AB Concept is renowned for its architectural use of space, and intricate detailing. The practice was founded by Ed Ng and Terrance Ngan, who draw on a wide range of cultural influences for their projects in order to create exceptional interiors that are unique to every space.

Previously, the studio has worked with the likes of the Four Seasons Hotels & Resorts and the Rosewood Hotels group; more recently, AB Concept has finished work on a new W Hotel, W Xi’an. The sixth and largest W Hotel in China, W Xi’an is located in the vibrant, cultural city of Xi’an, which was once the capital of five ancient dynasties.

For the new hotel, AB Concept has created a full-scale design that is cohesive throughout – from the public spaces to the individual guest bedrooms. Materials within each of the spaces have been carefully chosen to combine historical and modern elements; LED lights have been used in the entrance and lobby to emphasise the modern design, while the peach lacquered walls in the suits represent the Tang dynasty’s diplomatic gifting, and complement the overall aesthetic.

For the W Xi’an, AB Concept also worked with long time collaborator Tai Ping, using its couture carpets in the guest rooms, suites, corridors and ballrooms. Hoping to discover more about AB Concept’s design for W Xi’an, we spoke to the studio’s co-founder Ed Ng, and found out about the inspiration behind this spectacular hotel.

What was the brief for this project?

Aside from the high-energy, modern, yet luxury W standard, there was actually quite an interesting story when I had the initial meeting with the client’s boss. During our meeting he simply said, "Please Ed, no more Terracotta warriors in the hotel!" As a fast growing city, Xi’an felt a bit trapped in its own history and needed to move forward to emphasise its rich future ahead, just as much as its rich past.

We were asked to design something that would be on a completely different spectrum to the traditional Xi’an. I was so on board with this, especially with a brand like W, [because it offered] the perfect opportunity to break boundaries, think outside of the box and do the unexpected.

Any problems or challenges with the project?

Interpreting extremely recognisable historical elements into a very modern abstract form, and balancing them together was actually a big challenge during the design process. Imagining W - the New York party boy - traveling all the way to Xi’an to party with the Terracotta Warriors. It’s quite the contradiction!

What was your inspiration for this project?

A big part of our inspiration came, of course, from the historical and rich city of Xi’an. When you hear Xi’an, most people immediately think of terracotta soldiers and all of the different dynasties which founded their capitals here, so we took advantage of this whilst taking into consideration what the hotel owner wanted. The result is this contemporary design, which turns all the historical elements into a very abstract visualisation.

How did your previous experience designing for hotels help with the W Xi’an?

Xi’an is a city that has a plethora of choices when it comes to design elements to leverage from as inspiration; when we design a space we always look at the design with the visitor’s perspective in mind, as well as from a storyteller perspective. We mix together what the guest expects, with what we want guests to feel, to form a seamless flow and experience.

In the age of social media, travellers are eager to share their experience instantly; hence, we now focus on creating a memorable space - something that they will remember 10 years from now. We wanted to create a lot of stimuli and unexpected corners, just like the city itself. With its colourful history, you will find numerous discoveries everywhere when you look closely.

Do you have a favourite room/space in the hotel?

I think the lobby is quite an awe-inspiring area of the hotel. It ensures guests have a great arrival experience, with its incredibly high ceiling, hanging swirl features and the labyrinth-style check in area. It’s probably the most out-of-the-box part of the hotel and it is certainly fun for a designer to let all the creative juices flow - within set requirements - without any boundaries.

We had a fantastic time designing such a high energy and modern hotel in Xi’an – it’s a city so rich in history, but is also also rapidly growing into another Chinese cosmopolitan city, very much driven by tourism of course. We wanted to create a lot of stimuli and unexpected surprises within the design, which entice all of the senses and give guests a fresh, contemporary take on Xi’an as a city of the past and the future.

The vibrant heritage of the city is a testament to the cultural and social melting pot of East-meets-West sophistication. With this in mind, we wanted the guests to not only witness this “Grand Theatre” of time but also to make them feel like they themselves are personally partaking in this very exciting journey.